Warning  – Sharing the album cover image on Facebook may result in a ’24 Hour Ban’ warning… as we at LTW have just discovered. 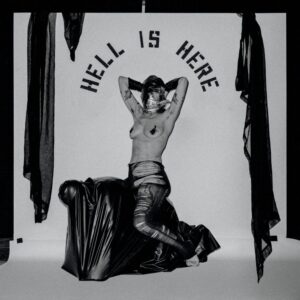 Hell is no longer round the corner, the road to it not paved with good intentions, nor is it ‘other people’… it is Here. Now.

HIDE are an electronic duo based in Chicago who have been making noise since 2014 and comprise  Heather Gabel and percussionist Seth Sher. They have been described as an uncompromising assault on the senses (and they)  ….remind the listener that feelings of anxiety, pain, and discomfort are equally as important as those of resolution.

They are not an easy listen.  This is not ‘summer fun’.  HIDE make prophetic hysteric Lydia Lunch sound as anodyne as Katy Perry by comparison.

In the same way that the lyrics to War On Women’s song ‘YouTube Comments’ were wholly taken from online abuse levelled at the band, the lyrics to the opening track “Chainsaw” by HIDE aren’t written by the band either, rather, they are a slew of verbal assaults they have received repeatedly on the street, often while in the company of a child.  Hey baby! Are you deaf? Are You too good for me? Bitch! Fuck you then!  The video is a collaboration with film makers Chris Hefner (Chicago) and Menthol Pictures (NYC).   Images of the innocence of the carefree child and her mum, intercut with stills of victims of rape & murder is as jarring as the music.

Gabel sings with such intense vehemency that she seems to throw-up at the end.

The theme of objectification carries through to the following track “999” with the use of a well placed vocal sample that declares “…when you depersonalize another person… it seems to make it easier to do things you shouldn’t do.”.This sentiment is expertly echoed throughout the rest of Hell Is Here and attempts to forcefully remind the listener of humanity’s absurd and animalistic nature.

“Raw Dream” closes out the album with driving focus and a determination to calmly but not quietly move forward despite feeling beat down and powerless, as a response to it even. “Raw Dream”is an anthem for the disenfranchised’s rising up, a long overdue and joyous re-calibration of an imbalance of power.

HELL IS HERE is a brutal, difficult listen… But it leads the way in visceral examinations of misogyny and the power dynamics in society. This isn’t banner-waving feminism used as a flag of convenience, this is Frankie Teardrops daughter all grown-up having her say and High Priestess of gender-war dystopian blues, Lydia Lunch will, I imagine, be impressed that HIDE can do this much aural intensity without using ‘the electric guitar’.

HIDE has a new definition, to sit alongside ‘conceal’ and ‘the skin of an animal’: America’s Most Hellish & Brutal Electronic Art-punk Duo.

All words by Ged Babey, except PR content which is italicised.

HIDE vocalist Heather Gabel was formerly married to Tom Gabel from the band Against Me, who of course is now Laura Jane Grace.  Heather was also responsible for a lot of the artwork used by Alkaline Trio.  None of this is mentioned in the bands press release because it is not really relevant, but I like to know a bit about an artists back-story and influences.  This video covers the latter…