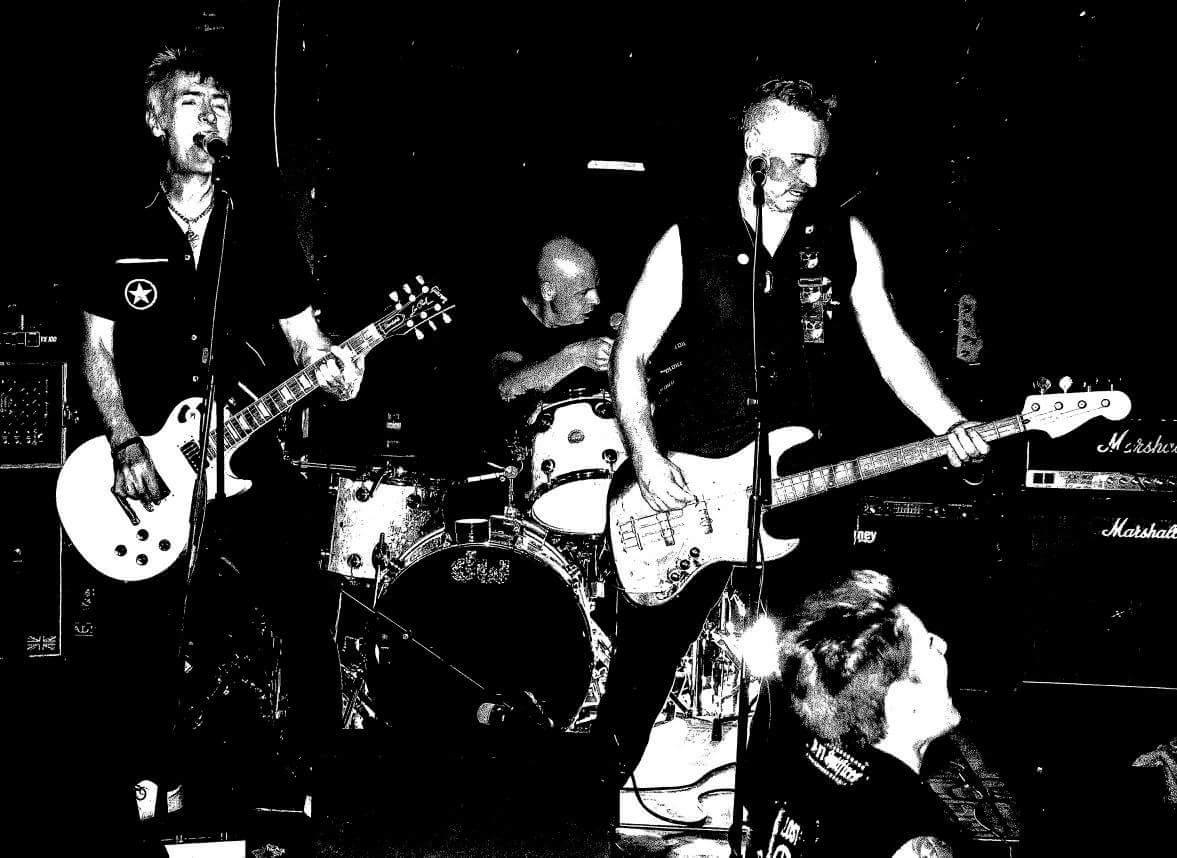 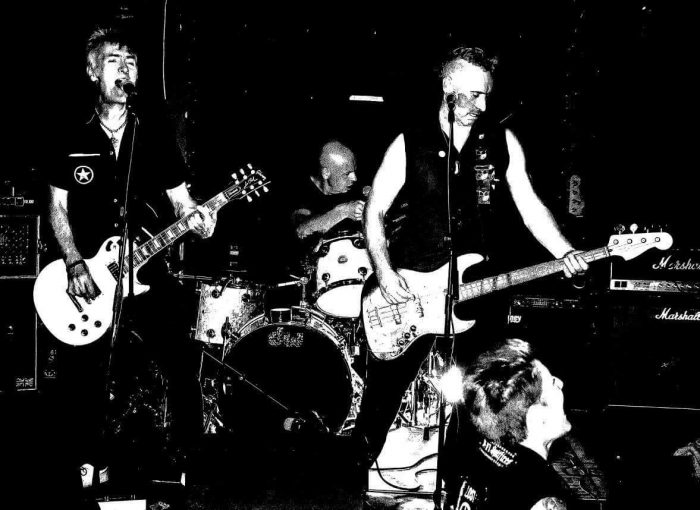 With a second album out and a tour of Germany underway Sophie Luchinsky speaks to Hi-Fi Spitfires frontman Stephen Straughan for Louder Than War.

Influenced from early punk bands such as The Sex Pistols, The Clash, Slaughter and the Dogs and The Boys, the band’s first album England Screaming was out. In October 2010 they played their first European shows, supporting 999 and Mad Caddies and a UK tour with T.V. Smith’s Adverts in March 2011. Early 2012 Dean left the band and was replaced by Neil Newton of the Angelic Upstarts. 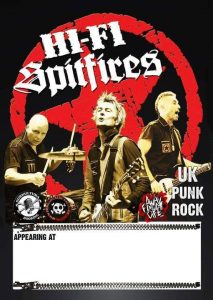 Talking about his musical background Steve tells, “As a young boy music was always just a background thing. It wasn’t really anything special to me. Then one day my brother was playing some records he had bought. They were punk records. I think it was records from the Buzzcocks, 999 and the Stranglers. When I heard these records there was something about them. Something so new. They were so exciting.

“At this point I just wanted more and more. Then when I bought Never Mind The Bollocks it totally shook me and almost knocked me off my feet. Soon after I bought myself a guitar.

“Years later around 1980 I joined my first band. We were called Formal Warning. I was the singer. We played youth clubs because we’re too young to play pubs.”

Telling about his previous bands Steve says, “The feelings I got from punk back then I can’t begin to describe. It got to the point where I just wanted more and more. My mam and dad were divorced then and times really hard for me. I think punk rock was something I needed. It gave me some stability and something to hold on to. It has actually become like the family I wanted. If I had not become a musician and been in a punk rock band I would not have met the brilliant people around the world have I can call my friends. It’s one of the greatest rewards you gain from playing music and travelling the world.

“The bands I played for were Holy Racket, Red London, The Lurkers, Angelic Upstarts, Loaded 44. I have been on albums of Red London playing guitar and singing backing vocals but the first material of my own was Holy Racket. We released and album on cd called Anthems For The Doomed And Dazed. We also released other cds and a 7-inch vinyl single called Anoraxia. Now, today I am in Hi Fi Spitfires and UK Subs.”

“The latest album from Hi-Fi Spitfires is titled NIGHT RAID”, Steve tells. “It is a 12 track album and is available on CD and vinyl. It was recorded in a brilliant studio in Newcastle, North East England by ex guitarist of Penetration, Fred Purser. We are really delighted with the album and very pleased with how well it is selling. The vinyl is a limited edition of 300 so I would imagine they will sell quite fast especially in Germany on our tour.”

Talking about music writing Steve says, “Now it is just me however our drummer wrote lyrics to one of the songs on England Screaming. I think this will change as our bass player is also a song writer and writes good songs for his other band First Wave.”

Telling about songs and their meaning and the main idea of the albums Steve says, “When I write songs I sometimes try not to make the meaning of the song obvious. For example, I have a song called Cover up which I am sure everyone thinks is about Government corruption or something when in fact it tells the true story of a guy who had a tattoo cover up. The guy had a tattoo of Elvis on his arm. He was a huge fan of Elvis. The man moved away to another city and changed job. He also became quite religious and claimed to have found God.  Years later the guy returned to his original home town and actually got his old job back. One day my friend noticed that the tattoo on his arm had changed. What was once the greased back haired Elvis was now Jesus with a crown of thorns. It was a story that had to be told. It then became the song Cover up. 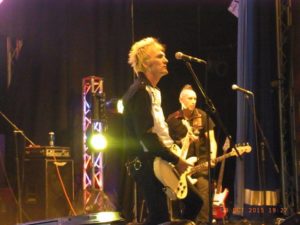 “One day I was reading a great story in the newspaper about a guy who was totally addicted to his phone. He wouldn’t put it down. One day he said to his wife, if I ever die please put my mobile phone in my coffin.  Sadly soon after the guy did die so his wife made sure he did have his phone with him when he was buried.  A few days later she noticed her grandchild playing with something small and made of plastic. It turned out to be the sim card from her husbands phone. She felt terrible that she hadn’t carried out her husbands wishes. She later said that she was considering paying to have the grave dug back up so she could put the sim card in the phone. The song is called the biggest blunder. It is also on the first album England Screaming.

“On the latest album we have a song that is also the title of the album Night Raid.  It isn’t as obvious as you would think by the title. Yes, it’s about WWI and yes it’s about the blitz bombing raids over England but it’s also a play on the words Night Raid.

“The subject is a true story told from a man about a time during his childhood. One night while out playing with his best friend the air raid sirens sounded. They raced to their homes for safety. Sadly one of the children never made it back home as he became a victim of the bombing raid. The child who did make it home never recovered from loosing his best friend. Sadly from that point the young boy vowed to himself that he no longer cared for anyone else in the world apart from his mother. He then turned to a life of crime. Ironically shortly after loosing his best friend when the air raid sirens sounded he stayed above ground while everyone else was sheltering from bombs. He went out burgling shops and factories as no one would see what he was doing. So he was in fact doing a NIGHT RAID.

“There is also a sad song on the Night Raid album called Poet Of Suburbia. It’s about a very talented woman photographer called Vivian Maier. She was an absolutely outstanding photographer. To cut a long story short she passed away never knowing how good she was, how influential she was to other photographer’s and how  valuable her prints would be.”

Talking about the most definitive songs for him Steve says, “I would say the most definitive songs are 37 hours, Last Gang and Battlefield Of Dreams. 37 Hours is my story of how you can work for a company like many others who don’t care about you. How every day they want more out of you and how they can gradually take away any rights you have. It’s great to have a job but not to be treat like a dog doing it. The Last Gang is about what I described earlier, the music that changed our lives etc. Battlefield Of Dreams is about the sacrifices we have to make to do some of the things we love, like playing music and touring.”

“I have shared the stage with many big punk bands but then again it’s not that difficult to do with so many punk festivals these days like Rebellion etc.”, Steve tells. “Just recently the UK Subs played a fantastic gig in France.  The gig was actually a roman amphitheatre.  We shared the stage with The Damned, The Vibrators, The Boys, Ruts DC etc. The sun was shining and it was a fantastic experience. I remember a long time ago when I was in a band called Holy Racket. We supported Rancid in Newcastle North East England. Since then it has just got better and better.” 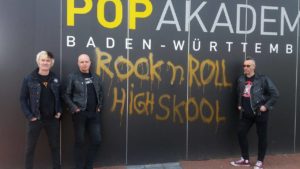 Talking about plans to release a new album and singles Steve tells, “I am at that point now where I really want to write more and more songs so yes, the plan will be to start writing the third album.”

Hi-Fi Spitfires are on the 10 days tour in Germany now. “It’s always brilliant playing in Germany.”, Steve says. “We now have two albums out on cd and one of them also on vinyl. I really want to release a 7-inch single. I already have some songs written for it. The only problem is it’s so expensive to do. We like to do it ourselves so we are in control of things. I can safely say it will happen very soon.”