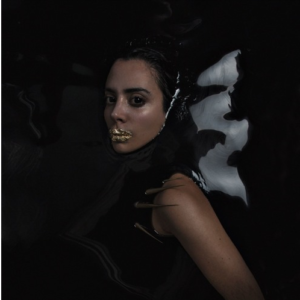 Louder then War get introduced to HEZEN and some gorgeous beats.

HEZEN is the creation of London-based French producer and songwriter Sarah Hezen. Her material comprises electronic beats layered with orchestral instruments, tackling themes that explore both the body and femininity.

Equally inspired by fairytales and sci-fi, her debut EP, STIGMA was released on 27 January and is a collection of songs about violence and resistance.

Oil fire is the captivating first offering from the EP and comes with THE most stunning DIY video I have ever seen. Created by HEZEN with her iPhone, a macro lens and with post-production on After Effects, the striking video captures the singer alone in her room, dressed in clay. As striking and unsettling as the accompanying video is, the track is as visceral in its sound.

The beautiful vocals are brought right to the front and are big, emotive and emotional. The track has a great trip hop drum beat threading throughout it and combined with the ethereal vocals, there is a real Massive Attack feel to this that is very welcome.

As the track progresses more and more orchestration is added and the song takes a real Bond theme feel to it. It’s almost as if David Arnold is behind the scenes on this one.

It’s a raw and unflinching debut that perfectly showcases the best of HEZEN’s talents. Bringing the vocals to the fore and allowing such creative freedom on the video makes for a refreshing and long overdue powerful statement of intent from this BIG sound and persona. It’s not the last time you will be hearing from HEZEN I promise you that! Gorgeous stuff.

HEZEN can be found on her Facebook, Soundcloud and she tweets as @sarahezen.