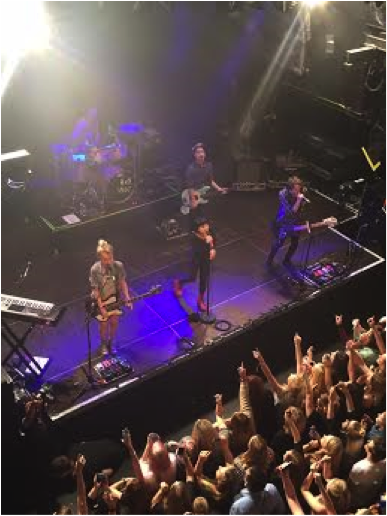 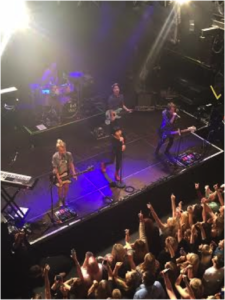 Hey Violet, a young Californian based rock band, brought meaning to the term ‘teen spirit’ last night after performing at the O2 Academy in Islington as part of their ‘Hey Violet Live’ Tour. They performed an energetic and unique set of songs for 1 hour, that got the crowd buzzing with excitement. This spirit was highly visible by the atmosphere in the crowd created by people dancing and singing their hearts out to every song performed. The sound was a great quality, every instrument was easily heard as they all worked together to create the best composition. Many teens even threw their phones onto the stage, risking hundreds of pounds worth of technology just for a chance of a picture from their idols, Hey Violet themselves. This showed how ecstatic the crowd were and how the concert was packed with passion.

Hey Violet included a mixture of varied paced songs to give the crowd a taste of what they could do and how they could switch from a rock styled song to slower more down to earth song.  Every song had a strong and relatable meaning, which made the concert flow extremely well. One of my favourite aspects of the night was when Hey Violet adapted modern pop songs such as ‘Blank Space’ by Pop sensation Taylor Swift, into catchy rock style songs so they became more suitable for the audiences preference.

As well as this they approached the crowd well by having a personal commentary between songs which made you connect to the band members and the songs they performed even more. People where throwing themselves at Rena Lovelis and Casey Moreta whilst they came off stage to make a more dramatic performance

Hey Violet’s line up consists of Miranda Miller, Nia Lovelis, Rena Lovelis and Casey Moreta (Edison Lo has been brought onto this tour to support the band as a Bass player).  Hey Violet are noted for their punk and rock like style as they showcase on their new EP titled ‘I Can Feel It.’  The EP was released on the 17th of July after they announced they had been signed to Hi or Hey Records which is 5 Seconds of Summer’s partnership of Capitol Records.

Hey Violet were previously an all-girl Rock band called ‘Cherri Bomb’, hitting a gap in the market, sparking all female power with many young people. After the previous lead singer, Julia Pierce, left Cherri Bomb the rest of the band reinvented their image slightly by bringing a male into the band (Casey Moreta), which may have encouraged more males to be interested in their music, as well as renaming the band Hey Violet.

Hey Violets EP consists of the songs I Can Feel It, Smash into You, Sparks Fly, Can’t Take Back the Bullet and You Don’t Love Me like You Should, which all have a similar sound yet have a different take on the ‘rock’ genre which is a great quality for a young band to have.

Another enjoyable and unexpected aspect of the concert was the supporting act, named Jessarae, who was a one man act, just him and a guitar. Despite being by himself this did not stop Jessarae from creating a great atmosphere for the crowd with aid from his loop system to build up the background of his songs, as if he was assisted by a band. Jessarae was a well-chosen support act as his set songs were partly based on rock and so this allowed the crowd to enjoy artists of the same genre of music, to which they enjoyed. The concert was highly enjoyable because of the quality of the performances and the high level of energy the musicians  kept throughout.

Words by Sophia Day.  This is Sophia’s first article for Louder Than War.