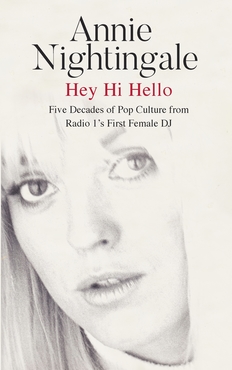 Paul McCartney’s on the phone. Bob Marley wants music he can dance to. Malcolm McLaren is like the Wizard of Oz. Little Simz is into English lit. And Jimmy Page isn’t going to get very far with a band name like Led Zeppelin. What a marvellous memoir.

From the very start, Nightingale engages directly with her reader. She welcomes us into an intimate conversation like those she has been creating for decades on the radio. Using second-person narration, Annie (can I be on a first-name basis?) addresses us directly and then puts us in her shoes as Britain’s first female DJ. She does it with an apt metaphor:

“Imagine you are a passenger on a scheduled flight on a commercial modern jet airliner. Imagine that suddenly the entire flight crew is stricken with some mysterious bug and are all slumped unconscious on the flight deck. And you, who have never even been allowed near the cockpit in your life, must now take over the controls, fly the plane and land it. Safely. Single-handed . . . .  And that is what it’s like, being confronted with a live radio desk.”

The intimacy that Nightingale creates between herself and the reader is unparalleled. It feels as though we’re in a small room with her, chatting as she tells her amazing stories, talking one-on-one over drinks. (Of course, she manages to do quite the same on the radio. As she explains at one point in the memoir, “I kept repeating to the listeners: look, this is your show, so take advantage.”) Her vernacular shines through in her writing—as we read, it’s almost as if we’re listening to the voice that’s so distinctive, warm, funny, and honest. Obviously, Nightingale is a master of the aural, broadcasting-based conversations she has conducted over the years that put her interview subjects at ease. Her written words do much the same for her reader.

Part of the memoir’s intimacy stems from its stream-of-consciousness(ish) style—Nightingale’s narrative flows as she remembers it. Each chapter is succinctly framed by its theme (ranging from immediately clear titles named for figures like David Bowie and John Peel or locations like Paris and Shanghai, to titles that arise solely from Nightingale’s storytelling like “The New Band Name” or “The Tortoise and the Politicians”). Within the chapters, the narrative shifts frequently between Nightingale’s memories and her contemporary commentary, while the organization of the chapters themselves reflects Nightingale’s interior connections among the subjects.

The fact that the chapters don’t always move along a timeline makes the memoir at once atemporal and timeless. It’s also one of the things I love about the book—it offers a distinctive reading approach. Certainly, you can read from cover to cover, but there’s another option, too. If the whole text feels like a conversation, then you can pick up the book, flip to any chapter, and have a quick, enlightening, and joyful chat with Nightingale about music. There’s no directive to read in any given order, and the absence of any clearly demarcated end to the narrative speaks to the fact that Nightingale’s work isn’t finished. There are more stories to hear. Thank goodness.

While untethered to time in many respects, the book is also markedly of the present moment. As Nightingale emphasizes, she used to worry about whether she’d arrived on the scene “too late,” yet she never wanted to “live in the past.” Always contemporary, Nightingale hooks her 2020 reader with references to Spotify playlists, Uber rides (if ride share companies had existed in the 1970s, Nightingale might have made it to Eric Clapton’s wedding), and the Covid-19 pandemic.

Speaking of ties between then and now, a number of the chapters function as archival records, complete with Nightingale’s twenty-first century notes. Interviews with Little Simz, Bob Marley, Marc Bolan, Billie Eilish, Karl Hyde, Elvis Costello, and others appear at various moments and help to “conjure back to life” some of the musicians we’ve lost, placing them in conversation with their contemporaries and those who are newly on the pages of NME. The folding of past and present also occurs in the film-script-like details Nightingale places at the tops of various chapters, identifying the setting, city, date, time of day, and interior/exterior space for the narrative. If you’re so inclined, you have all the details you need to reenact Nightingale’s memories, positioning them firmly in 2020.

Do you want life advice from Annie Nightingale? Who wouldn’t? The book is also filled with maxims from the world-class DJ. Here’s a small sampling to help get you through the day:

“If there’s somewhere you want to be, circle your target.”

“You cannot live your life the way others decide you should.”

“Don’t be late. Don’t ever, ever be late. Don’t even think it’s all right to be on time. On time can slip into being not on time so easily. There could be too many people queuing for the lift. There could be a delay in checking through security. Unforeseeable hazards can transform you from being Cinderella arriving via glass coach, in a shimmering ball gown, back into the shrivelling pumpkin.”

“[W]hile it’s great to have a role model, best not to copy. Or pick up too many similar mannerisms of your favourite star. That’s a lesson even The Beatles had to learn . . . . You being you, believe it or not, is . . . enough.”

“The music must never stop.”

Absolutely, take Nightingale’s words of wisdom to heart. But perhaps even more, view her career and her life’s work as a potent example to live by. In a delightfully pithy manner, Nightingale serves up a middle finger to sexism in music and broadcasting. Nightingale asks rhetorically, in the voice of all those naysayers, “Why would a woman want to be a DJ?” Well, she answers, “I want to be a DJ, because I figure it’s the best job in the world!” When someone suggests, “you can’t do this job because you’re a woman,” Nightingale responds with a simple yet powerful twenty-first century text message: “WTF?” And to the idea that women should strive for “symbols of some kind of domestic utopian paradise,” Nightingale replies, “no fucking way.”

If 2020 has you down, take pleasure and power in Annie Nightingale’s memoir. And when you finish the book, just turn on the radio.

You can purchase Hey Hi Hello from Rough Trade and other booksellers.