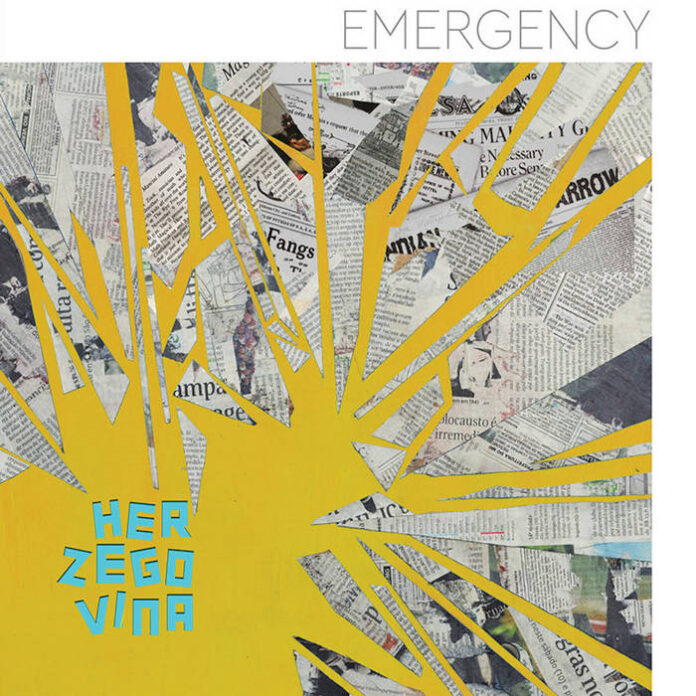 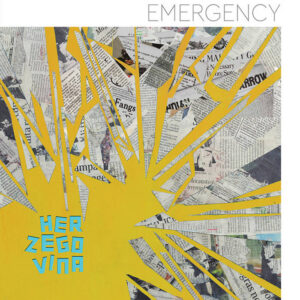 Original post-punk and no-wave sounds pointing toward an apocalyptic future.

Although the geographic reference of their name might suggest the band is from Eastern Europe, the trio that is Herzegovina comes from Rio de Janeiro in Brazil. On their debut album Emergency, Herzegovina prove they’re of both the past and the future. The band has clearly been influenced by the sounds of Joy Division with hints of some of the more experimental sounds that arose out of the New York no-wave scene of the early 1980s. To that end, Emergency screams out that, had the band existed in another time and place, the album could have appeared on Factory Records or 99 Records. Yet Emergency is also a frighteningly prescient and dystopian one. While Herzegovina wrote and recorded the album in 2019 and into the early pre-pandemic days of 2020, Emergency envisages a world of isolation with pangs of bitter loneliness in the first two tracks, Emergency and In Danger.

These frenetic, hysteria-driven songs offer a frame narrative for the album and invite the listener into a chaotic world occasionally punctuated by melodic new wave reprieves. The third and fourth tracks, Blue Eyes Dancer and Road of Joys, emulate the sounds of an Echo & the Bunnymen show, pressed up against a pulsating stage.

Next up there’s a double entendre trick of sorts. The song, Fellini’s Dream, might read to the uninitiated fan of the 1980s underground Brazilian post-punk scene as a reference to the Italian film director Federico Fellini, who brought us images of fantastical and foreboding mid-century Rome. Yet of course, if you’re in the know, you’ve already linked the song to the São Paulo-based band known simply as Fellini. John Peel championed Fellini, an ensemble made up of musicians who also drew influence from Joy Division, Durutti Column, and Factory-adjacent groups. Although Joy Division never played a show outside Europe, the story goes that Ian Curtis wanted to play in Brazil. The reference to the Brazilian band Fellini, and Herzegovina’s own fascination with Joy Division, illumine the global reach of music.

The pacing of Emergency remains quick and feverish through Ego Arcade and Fleeting Celebration, slowing down only in relation with Black Cat. The band then move into a brutal visual metaphor with Rubilitte. It’s a disorienting track that envelops the listener with guitar distortion and the faint yet piercing sound of a high-pitched alarm that fades strangely into a diminuendo, as if drawing on the softer sonic influence of Vini Reilly. As the album reaches its end, Herzegovina bring the listener back to where Emergency started with the sombre and delirious final track Intoxicação. It’s the lone moment in which the album becomes foreign to those whose languages fall outside Brazilian Portuguese, a descent into the unknowability of song.

You can buy the album on Bandcamp, where you can also learn more about Herzegovina and Mandinga Records.