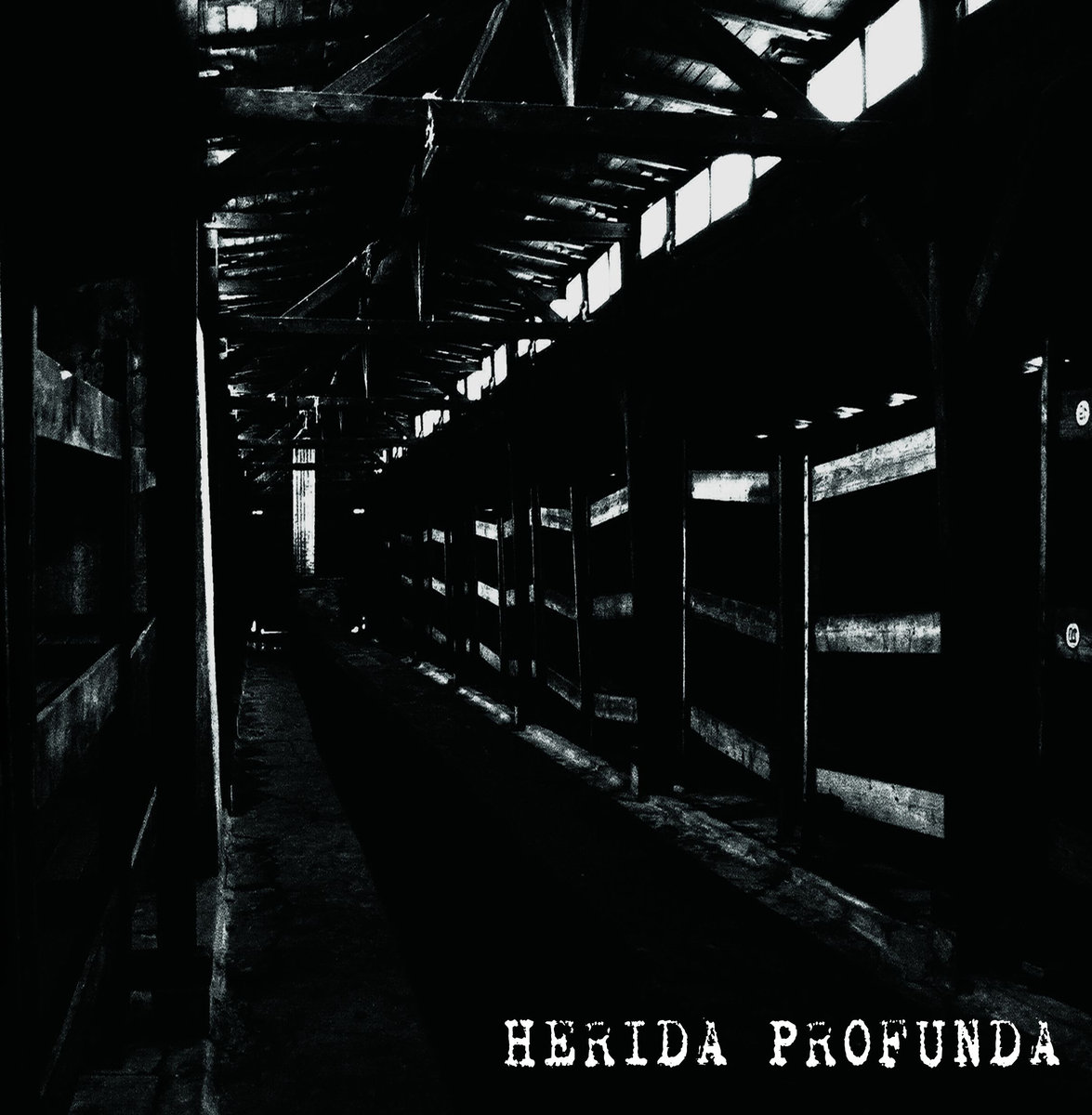 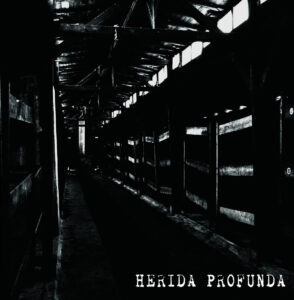 Debut album from this Polish based four piece who describe their distinct sound as a mix of Crust Punk & Hardcore; initially released back in 2013, but following a successful 2015 split release with Hell Bastard and confirmation that Herida Profunda will be appearing at the 2016 0161 Festival the album has been (thankfully) re-issued.

Herida Profunda are not for the faint hearted, they deliver a brutal post-apocalyptic noise the scope and scale of which is at times breath taking and far transcends their own defined crust punk genre, delving into the sort of industrial mayhem crafted by Controlled Bleeding under their Skin Chamber guise.

Opening with the extended ‘Intro’ and at just shy of three minutes one of the longest tracks here, you are taken down into blackened ambience, an eerie unsettling darkness that matches the death camp images that adorn the sleeve; a simple almost hypnotic keyboard refrain glistening within the pitch, the sounds being broken by found voices way down in the mix, tortured steel, electronic squall clearly signalling something you don’t want to be around for; and then the gates of Hades are opened!

‘Spalone Mosty’ (‘Burnt Bridges’ for non-Polish readers) announces the arrival of the Four Horsemen of the Apocalypse, and you are directly beneath their hooves, a whirlwind of thunderous drums, violent guitar slashes, cavernous grinding bass and non-human guttural vocal wails, I have no idea what the lyrics are, such is the delivery they may as well be in Klingon!

‘Zamach Bombowy’ demonstrates that Herida Profunda are more than just a vortex of noise; the tempo initially quickens to a thrash-pace, blast beats and twin tortured vocals, then drops away as the track concludes; this allows you to hear the loose bass and chugging riffs – the production is flawless; ‘Strach’ (‘Fear’ – thank goodness for Google Translator!) is a colossal rhythmic onslaught that despite the slowed pace retains a vibrancy and underlying energy that will keep you nodding your head.

‘Paraliz’ is again built around that loose resonating bass, and slashed chords, beneath the darkened rage you can pick out the raw punk DNA of the track; the inclusion of second vocalist, Magda (Vocalist for Epileptic Walk) during ‘Dlaczego?’ is interesting, almost a call and response between ravaged grunts and impassioned yelps.

‘Pierwsi du Gazu’, I couldn’t work out an exact translation, but it relates to the death camp gas chambers, and opens with a sample lifted from Tarantino’s Inglourious Basterds, when Brad Pitt as Lt. Aldo Raine declares “Nazi ain’t got no humanity. They’re the foot soldiers of a Jew-hatin’, mass murderin’ maniac and they need to be dee-stroyed…” before hurling you into a raging vortex of raining beats, and addictively rhythmic bass, whilst ‘Udreka’ adds touches of sludge to their distinct grind blasts and creates a blend of noise that feels entirely of Herida Profuna, but with familiar reference points.

Closer ‘Waira na Sprzedaz’ clearly isn’t looking back to the atrocities of the death camps for inspiration, opening with a quote from British evolutionary biologist, author, and media commentator Richard Dawkins “the process of non-thinking called faith.” which references current issues around suicide bombers – it’s like peering into a blast furnace, and will leave you utterly exhausted.

Make no mistake, this album is brutal and darkly oppressive, but there’s a defined beauty to it; it’s engrossing, multi-layered and perfectly pitched, and this seems totally at odds with just how ugly a record it can be.