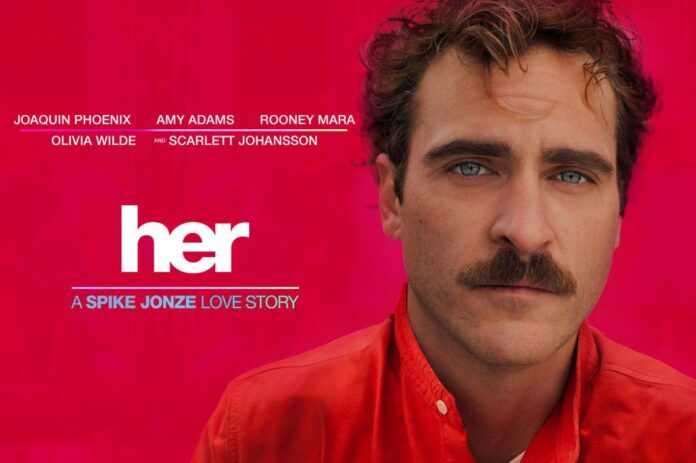 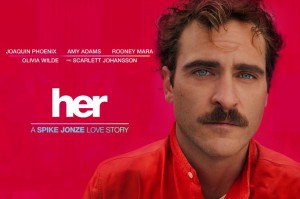 Director Spike Jonze is back, as intriguing, eccentric and innovative as ever. But is his latest film really as good as the hype suggests? Jamie Havlin gives us his thoughts.

Even if you’re not much of a cinema goer then it’s still highly likely you’ve seen some of the work of Spike Jonze, the man behind the camera of many of the most original and highly acclaimed music videos of the past two decades: think Fatboy Slim’s Praise You featuring the entirely fictional Torrance Community Dance Group or the Daft Punk promo for Da Funk where a man / dog wanders around the streets of NYC aided by a crutch and carrying a ghetto-blaster.

If you are a fan of his cinematic work then you won’t be surprised to discover that his latest feature, Her, is once again not easy to classify. Is it science fiction? Or is it a romantic drama?

Well, to borrow and combine the titles of two famous films that belong firmly in each of those genres, let’s call it an Artificial Intelligence Love Story.

Set almost wholly in a sun-splashed and strangely tranquil city of the not too distant future that’s identified as LA although much of the filming took place in Shanghai, Her has an often dreamlike quality. Buildings gleam and there’s not a piece of graffiti or litter in sight while the bulk of its inhabitants look youngish, affluent and very much self-absorbed. Fashions haven’t moved on too much from the present day although moustaches have made something of a comeback including with the Him of the film, Theodore Twombly.

In the past year Theodore (played by Joaquin Phoenix) has broken up with his childhood sweetheart Catherine (Rooney Mara) but has still to sign his divorce papers.

He works as the ghostwriter of personalised, emotionally charged letters for those too busy or lazy or just plain incapable of penning them themselves and his home is a very spacious and tasteful apartment with a stunning cityscape view from his windows – the letter writing malarkey obviously pays well in the future.

This is a guy who’s obviously a little insecure and vulnerable, and as likely to interact with a total stranger via some form of technology – such as a brief phone sex style encounter with the disturbed SexyKitten – as he is in person with neighbours, Charles and Amy.

It’s very significant to the story that he harbours obvious geek tendencies. His chief source of entertainment is immersing himself in a 3-D video game, or at least that’s what he enjoys most until he comes across a commercial from a pioneering company, Element Software, who have just launched OS1, which offers the world’s first virtual companion that is not just an operating system but ‘a consciousness’.

His individualised choice is a ‘female’ who names herself Samantha (Scarlett Johansson) after reading a book of baby’s names in a split second.

Existing inside Theodore’s hard drive or, alternatively, as a handheld gadget that works in tandem with a small speaker device that resides near permanently inside his ear, Samantha’s ‘DNA’ is based on the personalities of the many programmers who created her. And she’s evolving all the time.

Theodore doesn’t seem to think so. ‘You seem like a person,’ he compliments her.

Firstly, she operates as an uber-efficient secretary, organising his email inbox and proofreading his letters but it’s not long before she’s also getting involved in his personal life and encouraging him to make more of an effort to emerge from his very much less then frantic social lifestyle.

Certainly his mood improves as he becomes ever more reliant on her. Highly intuitive, she soon proves to have the ability to understand Theodore and what makes him tick better than any female of the living, breathing variety. And when she told him that she was evolving all the time, she wasn’t exaggerating.

Not only is Samantha mega-smart, she’s also beguiling, funny, and it has to be said, she possesses one sexy as hell voice.

You can see why Theodore might find himself at least a little smitten, can’t you?

And that’s before she instantaneously composes and records an exquisite Eric Satie-esque tune on the piano that matches the mood of their time on a beach together or secretly approaches a publisher – one of the few that still actually go to the bother of printing books – and scores a book deal for Theodore’s letters.

What’s more, Samantha responds in the same way to him and, of course, as in any more conventional relationship drama, you do get the feeling that it won’t too long before complications are going to arise.

In America, where the movie was released earlier than in Britain, Her has been the recipient of overwhelming critical acclaim and bagged a Golden Globe in the Best Screenplay category before going on to earn five Oscar nominations. As I write Rotten Tomatoes gives the film a score of 94%.

Undoubtedly ambitious, Her boasts a top-flight cast, the cinematography is at times mesmerising and the score, supplied by Arcade Fire with some additional music from their former member Owen Pallett, might be the best you’ll hear all year and few would surely grudge if The Moon Song, a charming little indie lullaby that’s sung by Johansson, accompanied on a ukulele by Phoenix, was shortly to win a little gold statuette for Karen O, who wrote it together with Jonze – she also performs the song herself  in the closing credits incidentally, so if you’re a fan hang back.

So why did this viewer feel almost uninvolved at times as events unfolded on the big screen?

Was I rooting for Theodore? Not to any huge extent, no. He appeared likeable enough albeit a little needy, over-anxious and intermittently a tad annoying too as he darted around the subway or danced wackily in his holiday lodge in an attempt to show off to Samantha.

Not only that but from the moment the opening credits stopped rolling a number of niggling thoughts began to stack up in my mind; for example, I couldn’t help but wonder why someone as tech savvy as Theodore took such little interest in what would surely be some pretty heavy coverage in the media of the experiences of OS users.

Or, for that matter, why didn’t he ever question the sincerity of what, after all, was a product designed by a corporation, whose main priority, unless capitalism has changed dramatically for the better in the near future, would be to maximise profits – and I bet Samantha didn’t come cheap. Love might be blind but surely someone who fakes it in his own job, albeit with good intentions, might just suspect that Samantha’s been programmed to fake it too?

Likewise, wouldn’t Theodore or some A.I. expert somewhere have envisaged the possibility of something resembling Samantha’s revelation at the climax of the film.

Are we supposed to believe that Elemental Software didn’t extensively trial OS1? Indeed, the logic of the movie would make much more sense to me if Theodore had volunteered to be part of that trial.

To totally enjoy the movie you obviously have to be capable of suspending your sense of disbelief more successfully than I was able to, although, saying that, Her did stay with me after I’d left the cinema and despite my reservations I would recommend you see it.

We already live in an age where a significant number of people are happy to admit they’ve fallen in love with someone they’ve met online before even being in the same room together.

Her is undoubtedly thought provoking and audiences will, I’d guess, question their own ideas about what constitutes a real relationship or, at the very least, ask themselves if society’s current reliance on technology, which will surely only increase exponentially in the coming years, is actually hindering the chances of (real) people connecting meaningfully with other (real) people?

Tom Hingley and The Lovers : The John Robb interview