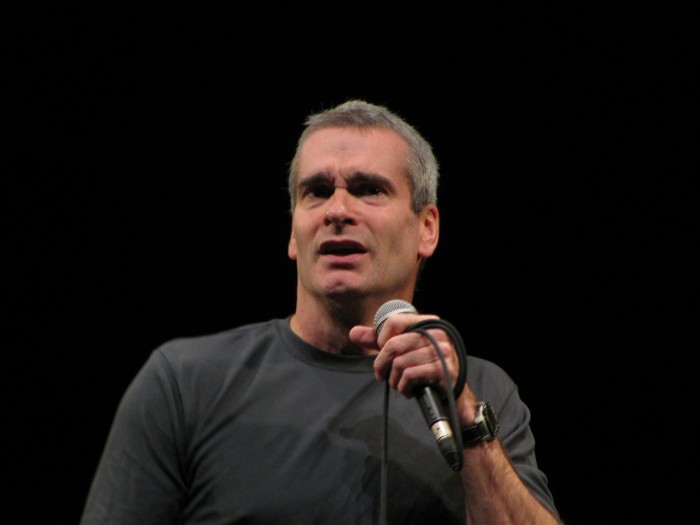 I have always admired Rollins sincere efforts to battle his way through life’s complexities, demonstrating through many indicative formats his intense & purposeful creative expression towards the world’s absorbent masses. He has undoubtedly created many a profound impact to the lives of others through his undeniable artistic ventures; from his early days creating high-octane musical statements in “Black Flag” & his very own “Rollins Band” to being an activist.

Rollins lived his hardcore punk rock days with a bona-fide drive to draw awareness to injustices along with a passion for positive radical change, ultimately uniting mavericks, misfits and non- conformists through the power of music. The tidal waves in which he embraced and conquered has not only helped his own personnel progression, on many diverse levels, but has given us; the people, the empowerment to liberate, unite & stand together in strength for what is true and just.

From his explosively energetic, raw attitude-ridden discharge days, his sharp intellect matured through becoming a writer, journalist, publisher, actor, motivational speaker, television and radio host, spoken word artist & comedian. I found it incredibly interesting during his spoken word set to hear him talk about his urge to always stay busy; in the mid 90’s coming off the road mean’t he found himself unemployed yet again, so took work in whatever field that it was offered in. He felt allot of the time that he was not sure of his potential within the acting parts in film’s such as (Jack Frost) or the television series (Sons Of Anarchy) however due to his adventurous nature would always give it a whole hearted go. I really admired his honesty as he projected the fact that he was riding the wave and learning as he went along.

Throughout the set he channelled his thoughts ideas, ventures & ideals, providing enthralling insights into his first encounters with David Bowie; explaining Bowie will always be part of his musical DNA; as well as his first & then frequent encounters with the mighty Lemmy. Henry explained in glorious descriptive detail that one day he went round to Lemmy’s house, to pick him up for a studio session to sing on Black Flag’s 2002 “Rise Above” tribute album; where all money raised from sales of the album were donated to the legal funds of the West Memphis Three. Henry asked Lemmy how it was so easy to get though his management with just one phone call?, as Henry thought it would be a mission, just like all the other artists he had tried to contact previous to him. Lemmy’s reply was simply, “You said you needed me and your a friend”. My heart melted on the floor right there as it showed with immaculate transparency what a true kind gentleman Lemmy truly was.

Rollins spoke of political views from Donald Trump (& his hair!) to the attacks in Paris. He drew potent conclusions upon the fact that we need to stand against terrorist fears & the importance of standing strong as individuals to go out to do the right thing in this life. He expressed that there is no hope in collectives or government’s, however each one of us as individuals can really make a change!. Which I wholly agree with. He spoke of the importance of going out to support music in love and appreciation of each other & to express what you can today and not leave it until tomorrow & to try to be more mindful & less judgemental towards people. Its clear that Rollins has drawn conclusions due to personnel encounter and experience of his own, his thoughts and process’s are home grown & he is kind to unfurl his personal teaching’s to the world.

He informed us in such a fun and humours manner about his expedition to the Antarctic where he slept with penguins in mating season. Which was hilariously trippy & a surreal experience however overall drove home a potent message about the damage we are doing to nature, as most of the animals he embraced out there are now endangered. His sharing with us of his awareness of animals conciousness and how it made him feel really struck a chord in me also. His whole show was just a joy to fall into & even though it was three hours it seemed to mean nothing as i felt so enthralled & intrigued by it all. Henry Rollins sure is an amazing speaker, without doubt a true intellect. I Really love how he channelled himself, from being humours to direct, brutally honest to profoundly passionate & insightful on so many intricate levels.

He was Just Brilliant…..