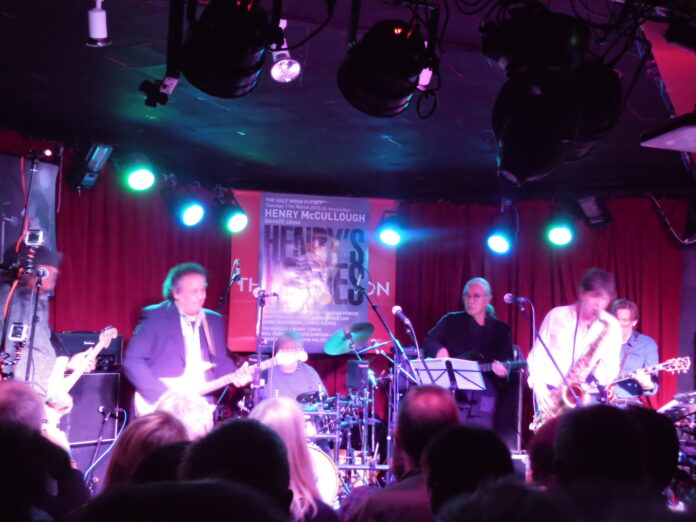 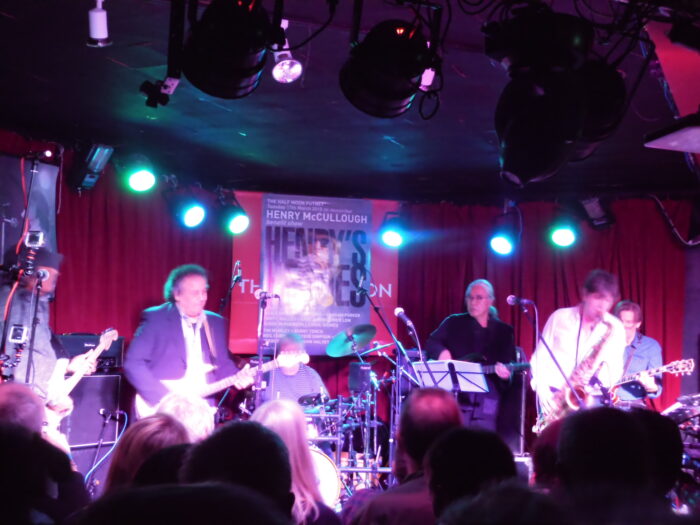 An all star cast assembles at the Half Moon to gather funds for the versatile Irish guitar hero who was left seriously disabled by a heart attack. Louder Than War’s Craig Chaligne reviews.

Irish guitarist Henry McCullough suffered a serious heart attack in 2012 that left him seriously disabled and unable to pursue his career as a musician. He is best known for his work with Joe Cocker and his short spell in Wings between 1971 and 1973 (his guitar solo on My Love is  one of the most memorable of all time) but he has played with numerous artists over the years while carving his own solo career on the side.

The instigator of the evening at The Half Moon was Tim Hinkley, a keyboard session player that used to front his own outfit called “Hinkley’s Heroes” which featured a rotating cast of musicians, McCullough was part of that band for several years. Re branded as “Henry’s Heroes” for the night the band featured a trio of guitarists with Steve Simpson, Bobby Tench and Neil Hubbard. The bass was held by Kuma Harada, the drums by John “The Admiral” Halsey and the saxophone by Mel Collins. I won’t start listing all the names they have played with as it would probably be shorter to list who they have NOT played with.

Due to some dodgy travel arrangements I arrived at the venue just has the band was tuning up for the first number (Will Birch was in the queue just in front of me). Steve Simpson sang the lead vocals on a cover of The Band’s “The Shape I’m In” followed by a take on Johnny Guitar Watson’s “A Real Mother For Ya” where Tim Hinkley took the mike. After a few numbers, the first guest of the night Tony O’Malley, the lead singer of 70’s funk combo Kokomo joined Henry’s Heroes to play “Use Me Up”, a song from his 1999 LP Freedom Road. It’s a testament to the quality of the players that the band manage to pull a three guitar line-up with style. Bobby Tench shone on his signature tune “Good Times, Bad Woman” that he originally performed while touring with Alan Price. John Halsey’s “claim to fame” as Tim Hinkley put it was to have been the drummer in Beatles spoof band “The Rutles”, which gave him the opportunity to sing “Easy Listening” from their Archaeology album. After hearing Halsey promising he would attempt “Bohemian Rhapsody” later in the show, we were treated to a McCullough original song : “Gone With Another”. There was another guest (unannounced) that sung a tune he had co-written in Nashville with Henry, apologies for not catching his name but he seems to be a frequent collaborator of Tim Hinkley.

The first half of the show finished and Dave Robinson, the founder of the Stiff record label came on stage with former Island Records alumni Nick Stewart (who apparently has a side job as an auctioneer for charity auctions)  to start auctioning some memorabilia. Some items sold well (a platinum disc for Pink Floyd’s Dark Side Of The Moon and a Beatles Vinyl Box set signed by Paul McCartney) and musical backing was provided by Nick Lowe who strummed a few chord of Monty Python’s “Always Look At The Bright Side of Life” while a 12 Inch of the same song was auctioned. He also played a few bars of his own “Heart Of The City” and “So It Goes” while a cheese replicating the original 45rpm of these 2 songs was being bid on.

Lowe stayed on stage for the start of second half of the evening to play one of Henry’s most famous songs “Failed Christian”, a song that he covered on his 1998 LP Dig My Mood. He was then joined on stage by Andy Fairweather Low and Paul Carrack on acoustic guitars for a short set of covers that included Hank Thompson’s “It Don’t Hurt Anymore” and Bobby Darin’s “Things”. Their small set channelled an Everly Brothers vibe that went down a storm with the crowd. Bobby Tench and Tim Hinkley had a tough act to follow but an excellent version of Van Morrison’s “Tupelo Honey” convinced despite Tench’s recalcitrant amp. Paul Carrack came back on stage to sing the obligatory “How Long” and Steve Simpson put on a great performance on “Time To Put The Snakes To Bed” as did Mel Collin’s on Allen Toussaint’s “Freedom For The Stallion”. Graham Parker made an apparition to play two of his own songs in the shape of “Local Girls” and “Soul Shoes”. The last guest of the evening was Suggs McPherson who joined the band for a reggae-fied version of “It Must Be Love” and “Madness (they call it madness)” from his band’s 1979 debut album.

Further info about Henry McCullough’s benefit can be found on Facebook.