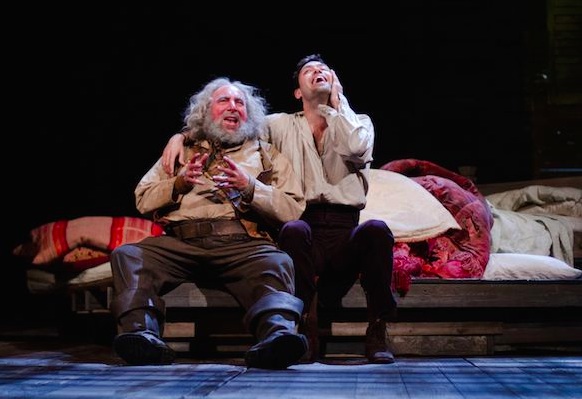 The problem of inheritance is one that will bother most of us in some way at some time. This could be in the family sense or it could be in a wider fashion as the uncomfortable season Manchester United have endured post Sir Alex Ferguson indicates. How many times have we seen bands lose key members and then never be the same? How many “new Ian Bothams” were offered to us in the late 80s and early 90s? The simple point is that just because someone is doing something well now, there’s no guarantee their replacement will do likewise.

This is all too clear to Jasper Britton’s excellent Henry IV who, it must be said, never looks as if he has been particularly good as a king anyway. In what is one of Shakespeare’s greatest plays, the contrast between the fretting King and his carousing, carefree son is striking. Part 1 opens with the guilt ridden Henry taking the crown as a ghostly Richard II looks down, and immediately realising the role is a poisoned chalice as rebellion stalks the land.

Meanwhile, his son Prince Hal, a role in which Alex Hassell brilliantly portrays the growth from reckless youth to maturity, is engaged in an endless party in the Eastcheap taverns under the hypnotic influence of Falstaff. Antony Sher gives a fantastic performance throughout Parts 1 and 2 as one of Shakespeare’s greatest characters and ensures the gluttonous, cowardly, amoral yet irresistible Knight will live long in the memory. Whether uttering the most shameful lies, or enduring endless abuse, Sher’s Falstaff has a conspiratorial smile that ensures we never forget the absurdity of the character as he quaffs, plots and stumbles through the scenes.

Such is the power of the portrayal by Antony Sher that you must ensure you keep a watchful eye on the other characters and in Part 1 none are better exemplified than Trevor White’s brilliantly egotistical, testosterone fuelled and slightly unhinged Hotspur. From squaring up to the King in the early scenes to his almost suicidal joy when he realises that, despite overwhelming odds, the Battle of Shrewsbury will go ahead.

Henry IV Part 1 is a real white knuckle ride as we move from the rebel camps of Percy and the marvellously pompous Glendower (Glyndwr for Welsh readers), to the court of an increasingly fretful King, to the taverns frequented by his son. In contrast Part 2 is slower paced and offers greater character development. However, any role that sees Oliver Ford Davies return to the RSC is one to treasure and his portrayal of Justice Shallow in the second play, whose simple attempts to gain favour contrast superbly with the cunning and greed of Falstaff. Paola Dionisotti also develops the part of Mistress Quickly throughout Parts 1 and 2 and, in what are largely male dominated plays, she achieves the rare feat of wringing genuine emotion out of Falstaff.

The theme running through both plays, alongside the perilous nature of kingship in the Middle Ages, is the gradual maturing of Hal. His realisation of his responsibilities is initially sporadic but there is an inevitability to his estrangement from Falstaff. There is palpable tension when Hal returns to court to greet his father, who has already declared a wish that Hotspur was his son and Hal someone else’s. However, when the chips are down and the brilliantly staged fight scenes bring the Battle of Shrewsbury to life, it becomes clear that Hal is growing into the son and heir that Henry desires. The resurrection of a presumed dead Falstaff after the battle however is pure comic genius and much needed light relief after the weighty events that precede it.

However, as Part 2 draws to its inexorable conclusion, Henry IV is able to face the great hereafter in the knowledge that Hal, now reconciled, has eased his worries regarding succession. An inevitable, yet moving, by product of the accession of the new Henry V however, is the shunning of Falstaff by the new King as the boy becomes a man and the rogue no longer has a place in his life.

Greg Doran has delivered another fantastic pair of plays here that build on the huge success of Richard II and ensure that the historical element of Shakespeare’s work continues to give us relevant and superbly acted productions.

Henry IV Parts 1 and 2 is directed by Greg Doran and runs at The RSC Theatre, Stratford upon Avon until September 6th and is then touring