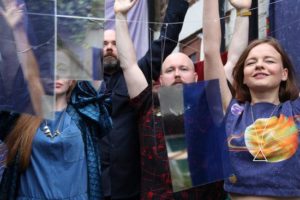 Four piece band Hen Ogledd have recently signed to Weird World and will be releasing Mogic on 16th November 2018. Hen Ogledd were founded by Richard Dawson, harpist Rhodri Davies, with the addition of Dawn Bothwell and Sally Pilkington. Hen Ogledd’s meaning comes from the Welsh name for The Old North.

Along with the news of Mogic, Hen Ogledd take you on a psychedelic journey through time and space in the new video for Problem Child. A throbbing bass led riff with a clanging post punk staccato harp opens the track and drives the whole tune. Dawson’s vocals singing “I live on a mountain. The only tall structure on this planet. The view is appalling”, already brief the listener of the type of song they are listening to and the sense of humour that’s attached.

It’s psychedelic in its visuals and sounds. The music and chorus lyrics of  “I don’t want to be part of the problem. I just want a little piece of the action” are twisted and intermingled into the madness that Hen Ogledd present so wonderfully.

Dawson’s voice is unmistakable and boy can he sing. The musicianship of Rhodri Davies, Dawn Bothwell and Sally Pilkington excel and carry the track and take it into the psychedelic sphere. Elongated, messy harp and noisy keyboard solos take on the last third of the song before the infectious chorus / verse kicks in for the last time.

The video itself is quirky and doesn’t take itself too seriously at all. The visuals and tongue in cheek aspects reminded me of Tony Oursler’s Sonic Youth video treatments. Very lo-fi and with a tongue firmly in the bands cheek.

But it’s the vocal delivery of Dawson that really drives this track. He carries the song with his vocal gymnastics that hit highs and lows in equal measure. He has the ability to grab the listener by the ears and take them along him on the journey taking into both the trivial and deeply philosophical aspects of life and living.

Each hailing from historically different tribal regions of the Old North, Hen Ogledd challenge the idea that the ancient world was rife with magic, while the new is infiltrated by cold logic. The tracks on the new album create new phantasmal blends of images and ideas that draw upon the mystical and technological. It’s a discombobulating pop prayer exploring artificial intelligence, witches, nanotechnology, pre-medieval history, robots, romance, computer games and waterfalls.

Hen Ogledd have a terrific pedigree and have already amassed a firm set of fans so far. Hopefully this latest single, as well as the upcoming LP will increase their reach and allow them the attention and recognition they deserve. Listen to this now and go and see them on tour!

Hen Ogledd can be found via their label and they tweet as @HOgledd.