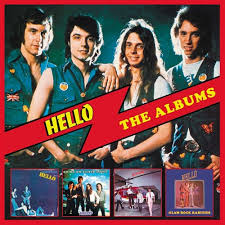 Comprehensive overview of the “New York Groove” hit makers, comprising the two officially released albums, plus a Japan only set from 1977 “Shine On Silver Light” and a “Glam Rock Rarities” disc, along with a plethora of bonus tracks. Ian Canty looks at trials and tribulations of the late-arriving Glam boys who managed two Top Ten hits and some longer running success in Germany despite not looking very Glam at all…..

Now on viewing a Hello 4CD boxset I imagine the first reaction for most people would either be “Who?” or “Did they really record that much?”. Outside of 70s enthusiasts, the vast majority would only really know them through their two top ten singles “Tell Him” and “New York Groove”, (the “Glitterbeat” of which features on almost every compilation of Glam hits that there has ever been) if at all.

Hello came together in 1969 and after a while spent backing supposed child prodigy Caroline Hall, emerged in their own right in 1971, keen to get a piece of the colourful Glam scene which was an eye-popping antidote to all the greyness of the early 70s. Led by singer and guitarist Bob Bradley and also featuring (future 80s hit maker) Keith Marshall, bass player Vic Faulkner along with drummer Jeff Allen, brother of Chris Cross of Ultravox! (well it was Tiger Lily back then), they had a tie up with the Zombies through their manager David Blaylock that led to Argent’s Russ Ballard penning some of their early material. They released three singles without success before hooking up with Mike Leander who was scoring big hits with Gary Glitter and the Glitter Band. As was his usual modus operandi of the time, he grafted that stomping drum beat to their sound and pulled in a suitable cover version for doing over, in this instance the Exciters’ 60s hit “Tell Him”, which reached number 5 in the Top 40 for Hello in 1974.

This finally got them the success they had been trying to grasp for over two years, be it only fleeting. A couple of flops followed (“Game’s Up” and a not very well advised version of Amen Corner’s “Bend Me Shape Me”) as well as being booted unceremoniously off the Osmonds tour, so they turned back to Russ Ballard who came up trumps with the harmonica-embellished “New York Groove”, which got them back on “Top Of The Pops” and in the teen mags when it reached number 9 in the charts as 1975 drew to a close. As far as the hit parade was concerned, that was that for Hello.

By the time they were afforded the honour of releasing a long playing record it was 1976 and in all but Germany their time was up. Even this LP smacked of a piecemeal, thrown together effort. Punk was on the horizon and the hotchpotch of previously issued material and covers that constituted “Keep Us Off The Streets” was never going to get far in that climate. In truth it does have its moments with the singles tracks but very much resembles something constructed on the run to get the last possible buck out of the band before they were rendered completely superfluous. The bonus tracks where Hello (much like the Sweet) were allowed off their leash by their handlers to record their own material, prove much better than the filler on the album itself. “C’mon Get Together” and “Lightning” gleam, “We Gotta Go” is a fuzz-driven winner and the single “Games Up” with the comical “yob” backing vocals is a scream, ripe for a Giuda cover. Once away from the management’s questionable advice they had a nice, humourous take on things and could definitely “Rock” into the bargain too.

So the following disc 2 features a band that probably couldn’t get arrested in anywhere but Germany, where another four singles prospered right up through 1977. Hello were in no doubt floundering at this point in time, but the positive thing was they actually found themselves as songwriters (not great ones, but not awful ones either) and established an identity of their own. I’m always interested in how bands from before “Year Zero” dealt with Punk and this is a textbook case for study. The largely self-penned “Shine On Silver Light” was released only in Japan (bizarre as you would have thought it was worth a punt to put it out in Germany) and saw the band move away from the now very dated Glitter Rock of their debut towards a more pleasing Power Pop sound.

Occasionally they landed in an uncomfortable area between Smokie and the Raspberries, but largely Hello at this time resembled a less credible Motors, who of course were having a good deal of joy with the New Wave/Pub Rock of their first album. This is a more than decent effort for a band of their type in 77: though they did sometimes come across as a little mawkish (the title track is a little sticky and sentimental and “Seven Rainy Days”, erm, a little wet), they also excelled at coasting, powerful tunes with more than a little oomf. “Starlight” is a Who-influenced epic with great harmonies, “Good Old USA” full of punch like early Ducks Deluxe and “Voodoo Eyes” a convincing stab at sly New Wave. No longer puppets, they celebrated freedom (and the penury that was an unfortunate side effect) with some great tunes, powerfully delivered.

By the time of “Hello Again” in 1978 (which did gain a proper release at home in the UK at least), they really were on their uppers. Even Germany didn’t want to know now. Perhaps they were suitably chastened by the setback of “Shine On” as there are a few looks back over their shoulder to their Glam prime in the hope of recapturing the success of their heyday. Apart rom these dalliances with that now bygone sound, this LP mostly wobbles between Hard and Soft Pop Rock with a little New Wave thrown in for good measure, like Rockpile meeting up with the Monks (70s UK version) in order to record the Boomtown Rats’ milder moments. The lack of confidence does result in a less satisfying record than the previous album and when an unconvincing stab at Disco arrives on “Feel This Thing” (two versions are included as bonus tracks) you know they had reached the very end. But the LP itself does have its moments.

“99 Ways” and “That’s The Time” provide a solid enough start and “Back Seat Talking” digs into their Glam past whilst updating their approach for something more acceptable for the fans of 1978 Rock Music. Momentum is given a bit of a knock by a naff cover of Jeff Beck’s “Hi-Ho Silver Lining” and “One More Step To Heaven” which bizarrely mixes Country Rock and Reggae to not great effect. “Machine Gun” and “Oh Caroline”, being good, simple rockers, gets them back on track, but you can see why it wasn’t snapped up in droves at the time. An uneven, fairly good record that doesn’t rip up any trees.

As you would expect the final disc here “Glam Rock Rarities” is chock full of foot-stamping mayhem, with their unreleased version of the Mud hit “Dynamite” (for a while it looked as though Hello had beaten them to the punch with this one, but in the event it was discarded at the last minute) clearly the template Les Gray and Co followed. Though it starts with the 12 Bar Country Rock of “Can’t Let You Go” which put me more in mind of Lovin’ Spoonful” than anything else, soon we’re into typical of the era items like “Let’s Twist Again”, “Where’s The Party” and the strangely Neu!-tinged “Shout It Out”. All great mindless fun that makes for a great companion “odds and sods” disc.

This exhaustive collection gives a new slant on a band only really recalled for “New York Groove”, but also exposes the quandary of Glam Rock in a nutshell. Outside of the market leaders like Slade, Bowie and T-Rex, the hits were irresistible and still stir the vitals all these years on, but the albums (again outside the “big three”) were pretty much after-thoughts, cheaply produced and buffeted with familiar covers. At the forefront of the Record Companies minds’ was making as much cash as possible before the inevitable backlash.

Once away from the charts Hello at least proved they had something worth saying and listening to, but found themselves swimming very much against the tide. That they managed to make a couple of decent records afterwards was very much to their credit. With good sleeve-notes by Phil Hendricks in a booklet that also has fine period pictures of the record sleeves, the Hello story is a familiar one of Glam Rock hopefuls that had a brief brush with the charts and then had to make their way in an uninterested, uncaring music world. I would have almost certainly have been as nonplussed by Hello back then as anyone: retrospect (and this boxset) allows us to be kinder and see things more clearly. They had good things to offer in both stages of their career, stomping Glam tunes and some fine Power Pop. If the world wasn’t listening, it certainly wasn’t their fault. A worthwhile, handsome release from a largely forgotten band.