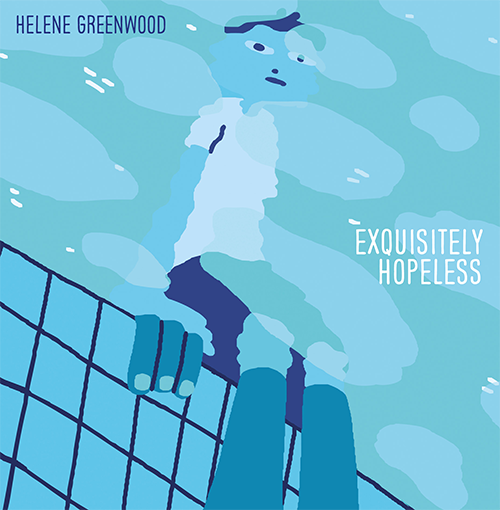 Helene Greenwood is a London based singer songwriter whose second album Exquisitely Hopeless, the successor to 2013’s critically lauded Collectable You, was released in October. On this new album Greenwood has moved away from the relatively traditional piano led songforms of Collectable You to create a much more complex and fluid series of soundscapes, that seem to echo and shimmer as they pass but still have an icy clarity that makes for compelling listening. idp reviews.

It’s difficult music to tag to any particular genre – taut, melancholy dream folk, cool and intelligent and self-possessed but it’s great pop too, full of intriguing rhythms and textures and hints of the music of the far east. Greenwood’s voice has a remarkable clarity and the spare, liquid arrangements form a collage with an array of collected sound: ambient noise, iPhone voice memos, a 1950s Hammond organ, an Oberheim synth, and East German microphones. The overall effect is slightly disorientating and utterly charming.

At it’s best it has the simple lyricism of early Suzanne Vega and it shares her fascination with urban life and its beauty. On this album there are freeways and apartment buildings, flat roofed houses, gleaming white fitted kitchens, motorbikes and children playing on the street. This is music that has not been to the country, except perhaps as somewhere to drive through, snatching glimpses through the car window. When birds appear they are viewed from the tops of tall buildings and although they are objects of yearning no one can seriously believe the singer will ever catch them. In this songworld even simple things are mysterious and contingent. Given that Greenwood has said in interviews that parts of the album were inspired by the work of Haruki Murakami, and especially IQ84, this is perhaps to be expected.

The songs seem to be fragments from a narrative that is never explained in detail and meaning of their poetry is frequently obscure, but there is always something happening to keep your interest from wandering, whether it’s a lovely harmony or a woodwind, or an echo of a child’s counting rhyme, or a fascinatingly deep drum beat.

In the standout track, Madame Marina, someone, the singer perhaps, visits a psychic in her house by the sea. Greenwood herself grew up in Dover with a view of the Channel from her bedroom window. Gulls cry in the distance and the music changes tempo as the song develops, recalling Kate Bush at times with it’s changes of pace and emotional colour.

Album opener This Is The News Today is another favourite which recalls, in some of its phrasing and the occasional discord The Beatles’ Day In The Life. Maybe I imagined that. I don’t know. But this is the kind of music that sweeps you along and encourages all kinds of wild connections.

On her version of the Bacharach/David classic I Say A Little Prayer Greenwood performs a remarkable deconstruction and reassembly, making the song a statement of fact and intent and taking the lyric about as far from Dionne Warwick territory as it’s possible to get.

Fascinating, lovely and beguilingly pretty this definitely an album to seek out from an artist who promises much more to come.