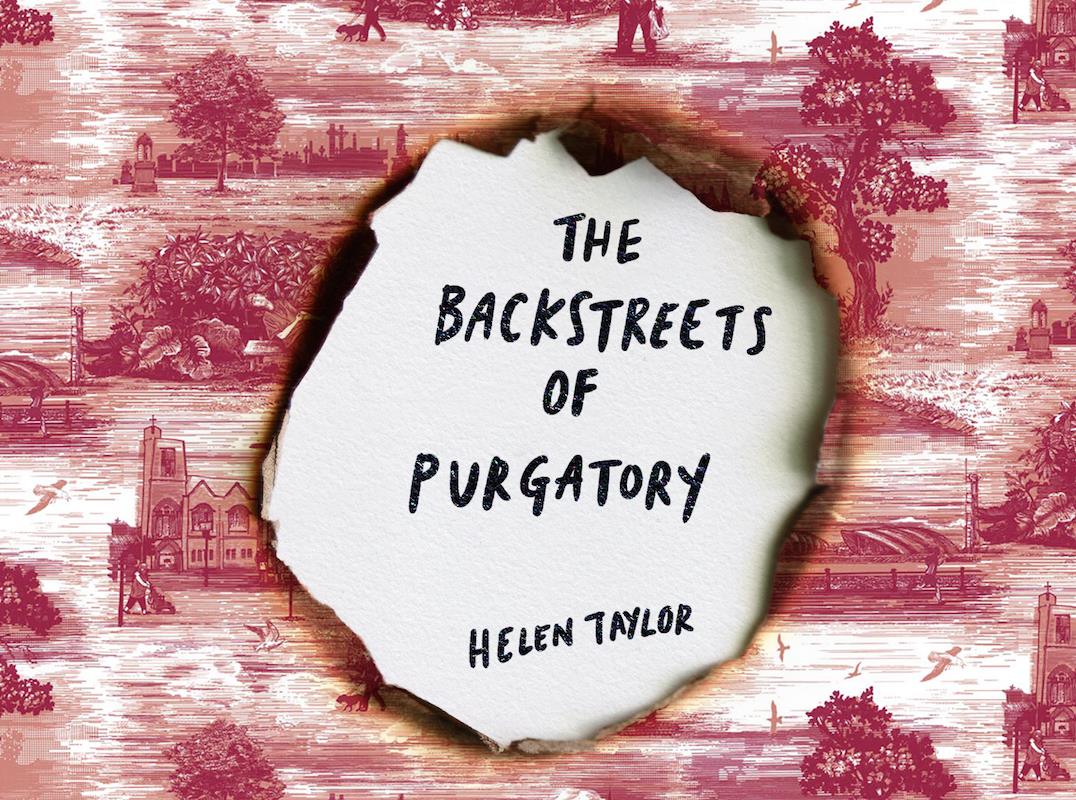 Helen Taylor: The Backstreets of Purgatory

The Backstreets of Purgatory may sound like the title of the (as yet unrecorded) third and final part of Edinburgh noir-rockers The Filthy Tongues’ Jacob’s Ladder trilogy, but it is in fact the debut novel by a refreshing new voice in Scottish literature, Helen Taylor.

Now based in France, Taylor lived, worked and studied in Glasgow for many years, developing a deep love for the city, its inhabitants and their rich vernacular, an influence which is clearly palpable in this subtly compelling, 496 page novel.  Taylor’s debut novel is published via the crowdfunded publishers, Unbound. With no support from a major publishing house, the novel has been publicised by the contemporary equivalent of word-of-mouth, the network of independent bloggers who champion cool new talent under the radar of the mainstream literary world.

Taylor is also steeped in the culture of Glasgow’s celebrated independent music scene, with associations to the scene dating back to the legendary Splash One club of the 1980s.  No surprise then, that her crisp prose rolls with a punchy sense of rhythm, punctuated by a razor-sharp wit.

Without giving too much away, the plot revolves around a distinctly downbeat character, art student Finn Garvie, who mopes around his makeshift studio in Glasgow. It would be hard to describe the character of Garvie as an anti-hero, coming across as he does more like a brutally close-to-the-bone portrait of an Everyman creative artist, struggling with lack of focus and direction. It’s tempting to read Garvie’s character as a rueful metaphor for the frustrations of the creative process, with the artist hamstrung by self-absorption while the really interesting stuff is taking place all around him.

This is where Taylor’s talent dazzles, as she draws well-rounded characters who orbit Garvie, such as the recovering heroin addict Tuesday McLaughlin, and the middle-aged Maurice. One of the sub-texts of this multi-layered tale appears to be the need to take a step back and see the bigger picture, rather than being blinded by self-doubt. Perhaps there’s an element of playful self-deprecation at work on the author’s part, here – does Taylor view Garvie as an unflattering projection of  aspects of herself?

Garvie idolises the Italian painter Caravaggio, who subsequently manifests in the troubled art student’s life, in one way or another. The novel builds to a dramatic and rather unexpected conclusion, which might lead the reader to question their interpretation of events. Throughout The Backstreets of Puragtory, Taylor contrasts light and shade in a manner that might be described as charioscuro, Caravaggio’s signature technique. The novel is certainly dark in places, but also suffused with the warmth and compassion of Taylor’s writing, particularly in relation to the secondary characters. Ultimately, Taylor’s subject is the human condition, with all its associated concerns of reality versus fantasy, hope against disappointment, frustration and failure.

Taylor’s writing is delightful throughout, painting vivid portraits of Glasgow and its people, and revelling in the ebullient language of the city.  This novel invites and indeed rewards repeated reading, with new layers and connections being revealed that perhaps weren’t immediately obvious.  Another key theme is toxic masculinity/gender inequality, subtly underscored by Taylor’s clear, descriptive writing. The novel is also laugh-out-loud funny at times, providing a welcome contrast to the darker moments. All told, The Backstreets of Purgatory is a debut novel of genuine substance and significance, heralding a bright new talent in Scottish literature.

Why Helen Taylor hasn’t yet broken through to a wider audience is for the time being a mystery as elusive as the nature of Caravaggio’s manifestation in this compelling and deeply affecting debut, that lingers in the reader’s imagination long after its covers are closed.

Buy The Backstreets of Purgatory direct from Unbound or via Amazon.