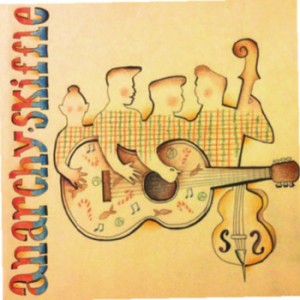 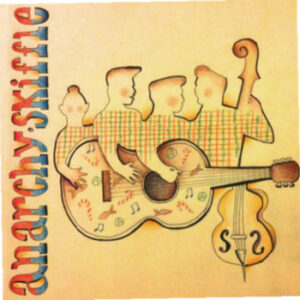 From The Chefs and The Horns to a critically acclaimed solo career, Helen McCookerybook releases her new album. Louder Than War’s Paul Scott-Bates reviews.

You may not be familiar with Helen McCookerybook, and that’s a shame. On the recent Danny Baker TV mini-series, Rockin’ Decades, one of her previous incarnations (The Chefs) was mentioned as being influential in 80s music, and Helen & The Horns were personal favourites of John Peel, recording no less than three sessions for him.

On Anarchy Skiffle, her new album, she breezes through eleven delightful tracks of which nine are self-penned, in some of the finest cowpunk/folk/skiffle you will hear. When someone has the talent for forming lyrics the way she does and is able to blend them with the sincerest of voices, you can’t help but sit up and listen. Simplicity is the key, but with added vocal arrangements from her team of cow-men the tracks are lifted.

Album opener and title track questions the steadfast following of anarchy itself, she was there and she knows what it was all about, but is able to flip the coin and offer up the ‘other side’.

It’s fitting that Magpie features the voice of Helen the songbird. Not trying to be anything she isn’t, instead singing with honesty and integrity, which is often her secret. She doesn’t need over-the-top productions or fancy effects because her voice is her all.

You might think there’s a Doris Day familiarity (ironic as a cover of Secret Love was a Horns favourite), and there’s no harm in comparing the sweet voices. Throw in a sprinkling of acoustic alternative pop and you’re not far off track.

Ridin’ High tells the story of the runaway 17 year old ‘single minded girl’ now back in the fold and comfortable with her life. Quite.

Amongst the listing is Rose Of The Soul’s True Desire, a lovely number written by partner Martin Stephenson who also guests on the album, and another outing for Pioneer Town, an old Horns favourite.

Not enough people know about Helen and that’s a travesty in itself and Anarchy Skiffle is a must-own for any self-respecting music fan, and the chance to give her more recognition is here.

~
The Helen McCookerybook blog is here, and you can buy Anarchy Skiffle here.