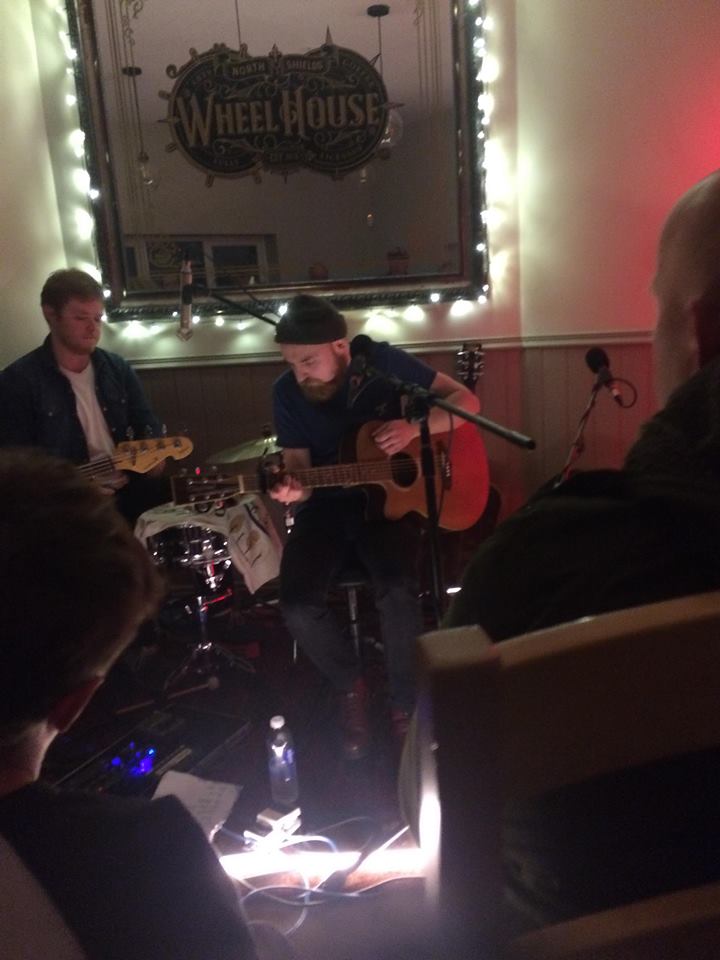 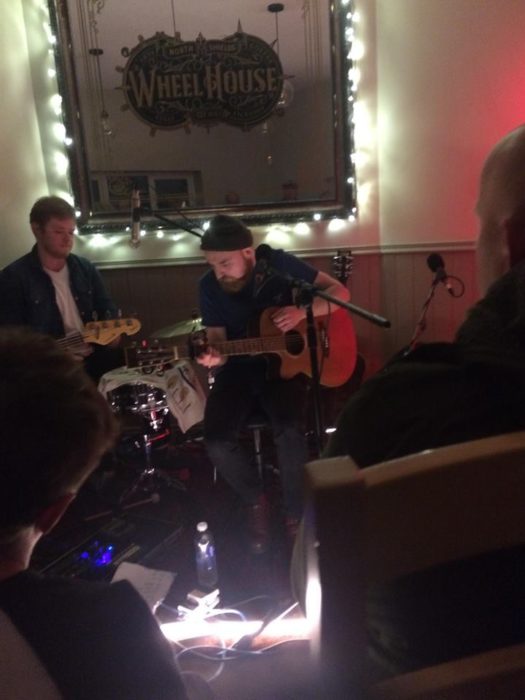 The Guardian newspaper recently named Whitley Bay’s Park View as the number one “cool shopping district” nominated by its readers. Could it be that the secret is out – that the North Tyneside coast is poised to have its status as England’s best-kept secret revealed?  This very special concert in nearby North Shields provides further evidence for that argument.

Hector Gannet don’t merely acknowledge their North Shields roots, they celebrate the proud working-class heritage and current resurgence of this port town that remains impervious to creeping gentrification. Located on Tanner’s Bank in the town’s atmospheric Fish Quay, newly-opened venue The Wheel House is an inviting café-bar that looks set to become a new cultural hub for North Shields.

With only 30 seats available, the distance between audience and performer was negligible as the opening act, local singer-songwriter Nev Clay, opened proceedings. Spotting a friend sitting directly in front of him in the front row,  Clay set out his stall with good-humoured audience interaction whenever a quip or anecdote came to mind. Clay’s original songs are characterised by mesmerising folk guitar married to witty lyrics, typically hooking the listener in with a memorable opening couplet. It’s a winning combination that harks back to the 1960s roots of the UK folk scene, and within minutes Clay had the audience. Particularly notable was Clay’s very effective use of a fuzz pedal with his acoustic guitar, creating sonics reminiscent of Neil Young or even, at one point, Zoot Horn Rollo of Captain Beefheart’s Magic Band.

There was barely time to grab another beer before Hector Gannet took to the stage, with a slimmed-down line-up of Jack Coe on percussion, Joe Coady on bass and Aaron Duff on guitar/lead vocals. The opening combination punch of Hollow and Crucifixion showcased Duff’s confident singing, at times bringing to mind Terry Reid, the great ‘lost’ singer of the 1970s. The concert was billed as an homage to one of the North East’s most celebrated songwriters, Alan Hull, and Duff made clear his admiration of Hull’s songwriting skills as the band launched into a passionate reading of the Lindisfarne frontman’s Blue Murder.

Even in this stripped-down acoustic format, Hector Gannet performed as a tight unit, with Coe and Coady providing warm and intuitive backing throughout the set. With the subject matter of the group’s songs being drawn from local people and their stories, Hector Gannet created an almost-magical intimacy with the audience, enhanced by the venue’s cosy atmosphere and location in the heart of North Shields’ historic maritime district.

Hector Gannet’s original songs more than held their own in the company of Hull’s celebrated songbook, with In Fading Light and Launch among the highlights of a set that was all peaks and no troughs. Hull’s We Can Swing Together summed up the egalitarian spirit of the evening, but it was the closing reading of Winter Song that hit the most poignant note, as the baton was passed from the North East’s most-beloved songwriter to the next generation.

With hip new venues like The Wheel House appearing along the North Tyneside coast, perhaps it’s only a matter of time before Hector Gannet and the local music scene come to the attention of the national media. Can a Guardian journalist or BBC6 Music researcher be tempted north? As they say in these parts: shy bairns get nowt.

All words by Gus Ironside.  More writing by Gus can be found here.
Many thanks to Mark Elliott, Leigh Anne Elliott and Aaron Duff.