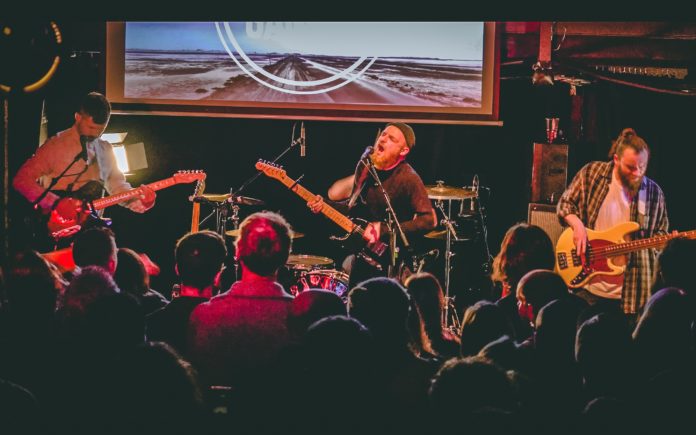 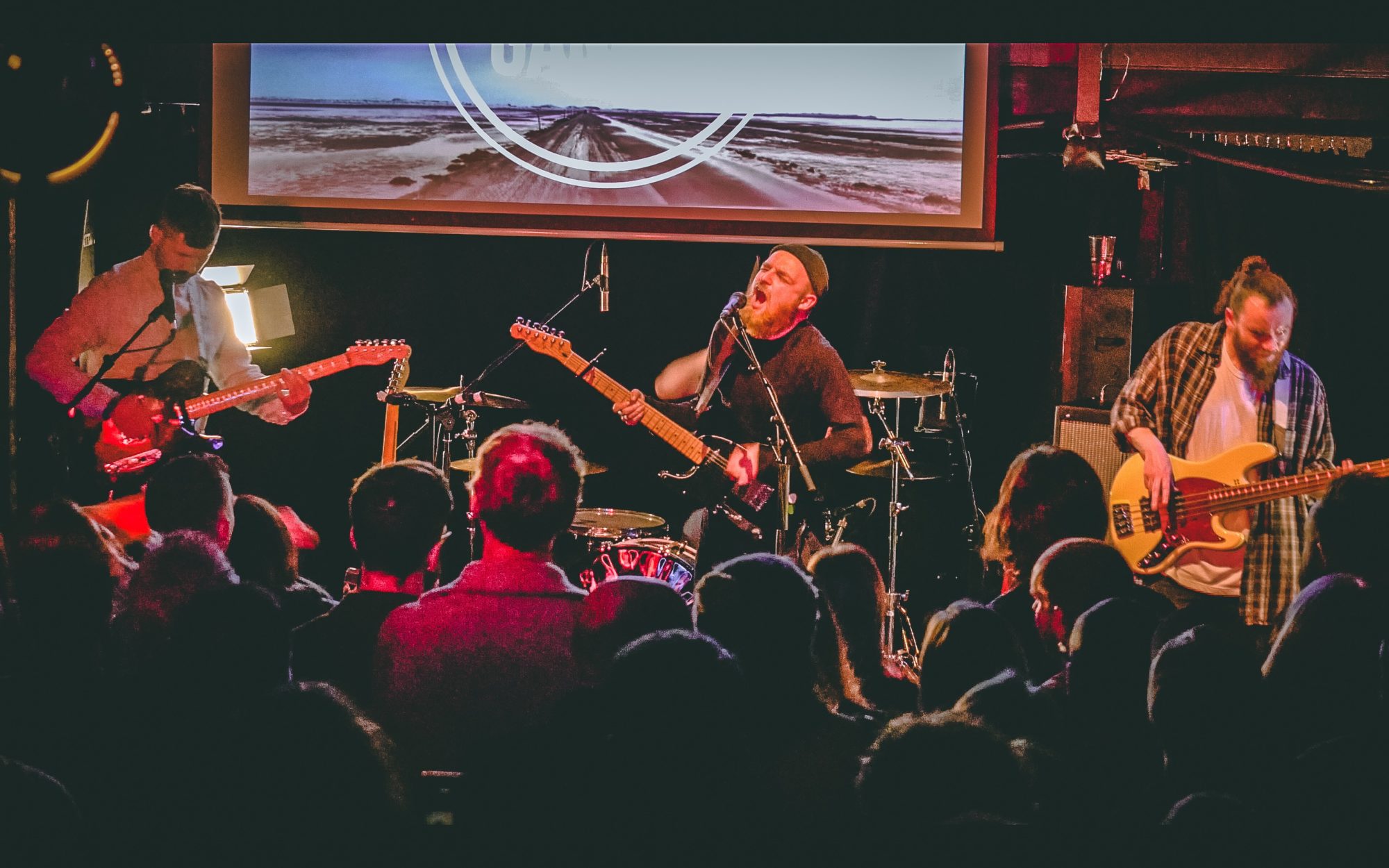 Fresh from supporting alt-country legends The Felice Brothers, Hector Gannet have continued their track record of selling out gigs in jig time, with many ticketless fans left disappointed, yet again. Looking round the intimate surroundings of The Cluny 2, the group’s fanbase was revealed as being an eclectic mix of young and not-so-young, pleasingly reflecting the inclusive values espoused in singer Aaron Duff’s songwriting.

The show got off to a dramatic start with support act Single Black Olive powering through an intriguing instrumental set that married ’60s surf-rock to Captain Beefheart-inspired eccentricity, via various deep dives into library music, TV and radio themes and goodness knows what else. One particularly tasty number combined Marcos Valle-style Brazilian bossa-pop with ’60s surf twang, and covers of Nelson Riddle’s Theme from Sam Benedict and Brian Fahey’s At the Sign of the Swinging Cymbal (AKA Alan Freeman’s ‘pop-pickers’ jingle) demonstrated the breadth of SBO’s musical influences.

Wonderful stuff from a group who have successfully carved out their own distinctive sound and established themselves as a must-see live band.

Onto the main act, and let’s not mince words here – Hector Gannet were on peak form, in spite of frontman Aaron Duff battling with the lurgy throughout a storming set that mixed superb new songs with old favourites. The show opened with an exclusive preview of the video for the group’s insidiously addictive second single Dead Nag. The video’s tongue-in-cheek farmyard surrealism somehow managed to invoke both Animal Farm and The Wicker Man, without the customary darkness of those iconic cultural references. The entire audience appeared transfixed by the video, which will premiere on the Louder Than War website later this week, but a technical difficulty resulted in a truncated view, so we were informed that the video would be repeated at the end of the show.

Many audience members would be familiar with Hector Gannet’s older material, so it was a very encouraging treat to hear new songs that maintained the high standards of the songs written for the Moving North – Coastal project, featuring archival footage of Northumberland and the North Tyneside fishing community.

Footage from Moving North – Coastal featured in a segment sound-tracked by three songs, The Launch, The Land is Behind Us and Until My Bonnie Can be Revived, the group’s live playing dovetailing perfectly with the film projection.

It’s hard to pick out highlights from a flawless set that showcased all aspects of Duff’s songwriting and the band’s versatility, but Dead Nag and its predecessor, Hector Gannet’s debut single All Hail, All Glory went down a storm with the capacity audience. As well as being one of the most skilful young songwriters in the UK, Aaron Duff is also blessed with a very fine singing voice, powerful yet tender, with his native North Shields accent never tempered for commercial consumption. Even while clearly suffering from a heavy cold on this occasion, Duff showed real grit and determination, his vocal performance only slightly suffering as the frontman battled through the lurgy to the set’s conclusion.

And what an ending it was. Hector Gannet once again paid tribute to Duff’s hero Alan Hull (of Lindisfarne fame), with a stunning rendition of the Tyneside songwriter’s Blue Murder, a song which wouldn’t have sounded out of place on Neil Young and Crazy Horse’s Everybody Knows This is Nowhere album, but which actually dates from Hull’s debut solo album, Pipedream (1973).

Not to be outdone by Hull’s sublime songcraft, Hector Gannet then blew the roof off The Cluny 2 with a stormy, rampaging take on their signature song, The Haven of Saint Aidan’s, The stoic but exhausted Duff left the stage vowing to take to his bed for a week, and the audience were treated to a very welcome second showing of the Dead Nag video, capping a triumphant show that left no doubt that Hector Gannet are a bona fide North-East phenomenon.

‘Dead Nag’ will be released on February 21st; pre-save the track here.

Hector Gannet are on the web, Facebook and Twitter.
Single Black Olive are on Facebook.
All words by Gus Ironside. More writing by Gus can be found here.

Many thanks to Mark Elliott, Aaron Duff and Jane Kingston