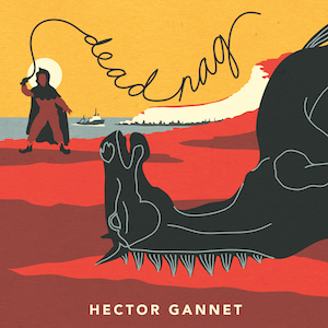 Named by Louder Than War as one of its “top 25 new bands that might change your life in 2020”, North Shields group Hector Gannet are a bona fide North-East phenomenon, selling out shows within a few days of tickets going on sale.

The group’s recent concert at The Cluny 2 in Newcastle featured a sneak preview of the captivatingly surreal video for their second single, Dead Nag, which is due for release on February 21st. Boasting perhaps the most subtly addictive melody frontman and songwriter Aaron Duff has penned to date, Dead Nag is a quietly subversive and understated gem that quickly gets its hooks into the listener and doesn’t let go.

Following hot on the heels of previous releases All Hail All Glory and The Haven of Saint Aidan’s, the single is a taster for Hector Gannet’s hugely-anticipated debut album, mooted for release in Autumn this year. As usual with Hector Gannet, the single’s sleeve artwork (designed by British Sea Power’s Matthew ‘Woody’ Wood) is on a par with the music, while producer Paul Gregory of Lanterns on the Lake showcases the group at its best. Dead Nag was recorded at Polestar Studios near Newcastle, an award-winning studio run by Pauline Murray and Rob Blamire, of legendary North-East rock band Penetration since 1990.

Hector Gannet frontman Aaron Duff has spoken about recent political events providing the inspiration for the lyrics of Dead Nag. Directed by Jack Moon and recorded on location in rural Northumberland by The Northwood Sessions, Louder Than War is proud to exclusively premiere this delightfully surreal video by North Tyneside’s finest.

Dead Nag will be released on February 21st; pre-save the track here.