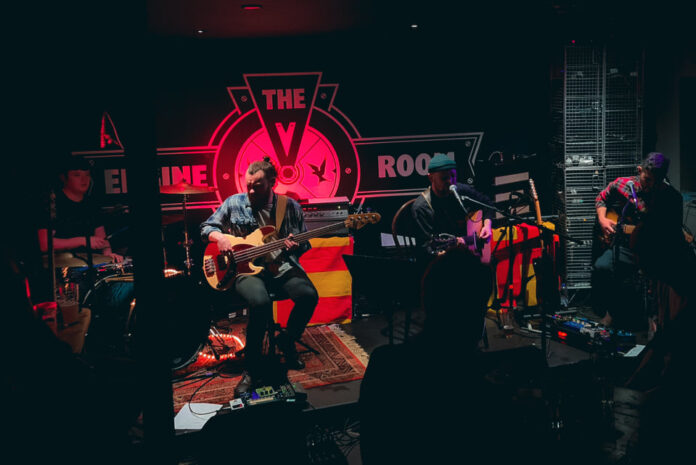 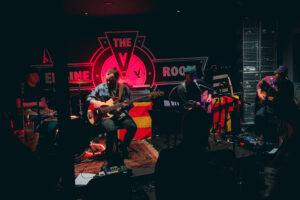 As they prepare to return to the studio to record new material, North Tyneside local heroes Hector Gannet hosted an intimate, pared-back show to promote the release of their new 4 track Into The Deep EP. Showcasing excellent new songs as well as some old favourites, the North Shields group continue to impress.

Long-tipped by Louder Than War, Hector Gannet have built a loyal following in North-East England, winning over new fans when supporting the chart-topping North Shields singer-songwriter Sam Fender and garnering rave reviews for the group’s debut album, Big Harcar.  With their biggest concert yet scheduled for March 19th at Newcastle University Student Union as part of a five-date tour, Hector Gannet are starting to pick up momentum again after the challenges presented by the Covid-19 pandemic.

Every gig the group announces sells out almost instantaneously, and this intimate concert in the stunning surroundings of The Engine Room on Tanner’s Bank in North Shields was no exception. In light of the current Omicron-driven Covid surge, the event was pared-back, with capacity limited to reduce risk of transmission. Billed as ‘A Night of Hibernal Festivity’, the concert comprised of two sets by Hector Gannet in full-band mode, with singer Aaron Duff swapping his Telecaster for an acoustic guitar and drummer Jack Coe utilising brushes to create a hushed atmosphere. Bassist Joe Coady and guitarist Martin Wann completed the line-up.

The first set kicked off with the atmospheric In Fading Light, one of many standouts on Big Harcar, but what really impressed was a clutch of newer songs, The Eighth Day, The Silent Spring, City In the Sand and Emmanuel Head, all maintaining the same high standards that songwriter Duff had set on the group’s debut album. Serpentine, from that album, was warmly received as always, and the electrifying cover of Alan Hull’s Blue Murder which closed the first set allowed bassist Joe Coady a rare moment in the spotlight, with a delicious bass interlude showcasing Coady’s sublime ear for melody.

The whole group were in top form throughout, Duff engaging in warm banter with the audience and Wann displaying his customary creativity in the lead guitar role, always serving the song, without a single wasted note. Drummer Jack Coe brought all his subtlety to bear on the stripped-back sound, confidently shepherding the group through the shifting dynamics of the songs.

A short interval followed, allowing band and punters alike to grab another beer before the second set commenced with the sublime one-two opening punch of The Whin Sill and Into The Deep. The set featured an impressive triptych of newer songs, Last of the Buffalo, Wailing Wall and the stunning Water Lillies, while the sugar-coated political allegory Dead Nag seemed particularly pointed at a time when the tides appear to be finally turning on a grimly inept Prime Minister and his ham-fisted Government.

Until My Bonnie Can Be Revived followed, undoubtedly one of the most beautiful songs Duff has written to date and further evidence of the youthful songwriter’s talents, followed by the rousing All Hail, All Glory, making explicit the influence of Joe Strummer on Duff’s aesthetic. At times it felt like Duff’s other songwriting hero, the late and much-missed Alan Hull, was present in the room, looking on approvingly, so it was apt that Hector Gannet closed the evening with a second Hull cover, Winter Song. Since the group revived the Lindisfarne song 3 years ago, it has also been released as a charity single by Sam Fender, Hull’s compassionate lyrics clearly resonating with a new generation.

Hector Gannet return to the recording studio later this month; with Duff continuing to mine a rich vein of songwriting, the results are sure to be another milestone in the progress of one of the most vital groups in the North-East today.

BUY Into The Deep EP.

All words by Gus Ironside, 2022. More writing by Gus can be found here.