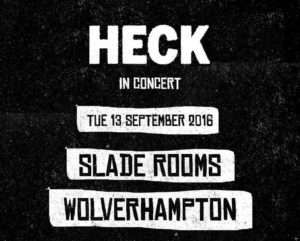 Heck have had a cracking summer festival season, take a look at twitter for the proof, for every appearance the band make there is a plethora of tweets from overwhelmed new fans, all saying similar things. A case in point: Ninety-Two days ago @timbowalker tweeted “Just remembered how insane @abandcalledHECK were at @DownloadFest, chucking themselves about like rag dolls.”

The words “HECK” and “Live” are now synonymous with chaos, energy and carnage, so when the band announced they were to do a tour with Black Peaks, expectations and excitement hit fever pitch.

The set at Wolves Slade Rooms initially started out quite mild, in the physical sense at least. Opener “Good As Dead” kicked out the PA sounding like a malfunctioning jet engine swallowing up a flock of confused birds, rumbling away furiously swallowing anything remotely serene and unsuspecting in it’s path.

You can always rely on a HECK gig to bring something new to the table, this time round, in a literal sense. Halfway through the set, Guitarist/Vocalist Johnny Hall finds a round table of about 4 foot in height, and decides to stand on whilst playing. The thing is….. the table is on wheels and once the mosh brigade find out this fact they provide something rather wonderful, we get to witness the closest thing we’ll ever see to “HECK: On Ice”. The table is surrounded and pushed from one side of the venue and back, time and time again, the floor, sodden with beer and as slippy as ice, becomes a playground where people are flying onto their arses to get out of the way as Johnny glides past them like a bearded ballerina atop the musical box of pure hardcore noise and energy.

The set comes to a close with one of their oldest tracks “The Three Legged Race.ist”, and whilst being as awesome a sight as ever it became apparent that the floor is practically filled with nearly as many photographers as it is punters, which becomes slightly annoying when you take into account that one of the joys of a HECK gig is the total lack of barrier between follower and band.

The almost solid wall of photographers gets in the way of people getting to the action, the bigger the band and their reputation gets, the more this is going to happen, a cruel but understandable irony. Of course, the band don’t notice this as they furiously throw themselves from wall to wall and ceiling to floor, lost in an intense cacophony of anger and joy that makes as natural an impact to a seasoned HECK gig goer as it does the first time you see them live.

All words by Christopher Lloyd. You can read more of Christopher’s writings at his author’s archive.