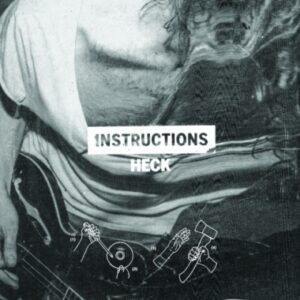 For three years HECK’s live shows have been a joyously chaotic affair that have garnered massive amounts of attention and disbelief, but can HECK be as enjoyable sitting at home scratching your nads playing PS4 as they are whilst ducking the odd flying mic-stand, band member, lunatic fan or guitar? Can they actually pull off an equally satisfying long player?

The answer is a more than resounding yes. Simply put, Instructions a surprising feat, one of the finest hardcore albums to appear in the last decade. It’s that good.

New single and album opener ‘Good As Dead’ sets the bar. Riffs, riffs, riffs, maniacal vocals, some fantastically sludgy bass, all underpinned by great song construction which after a couple of listens manages to earworm it’s way into your cranium for quite some time. Huge swathes of the album fly across in a barrage of bludgeoning fury, but like all great hardcore artists, HECK are clever enough to add shade and light which stops the listening experience from becoming too difficult or samey. Three of the earlier singles are re-recorded here, now much fuller and in some instances featuring acoustic and orchestrated sections. When the barrage does die down somewhat, it’s filled by fantastically dirty and sludgy bass, such as in the track ‘Totem’.

The biggest surprise is the album closer ‘See The Old Lady Decently Buried Although Amongst Those Left Are You’ which over the course of sixteen minutes takes in what seems like every stage of the bands career before the latter half breaks down before building back up with a set of fantastically unexpected guitar solos. As a final track it’s a fantastic statement that allows HECK to be as experimental as sonically adventurous as they please on future recordings.

All words by Christopher Lloyd. More writing from Christopher can be found at his author’s archive.