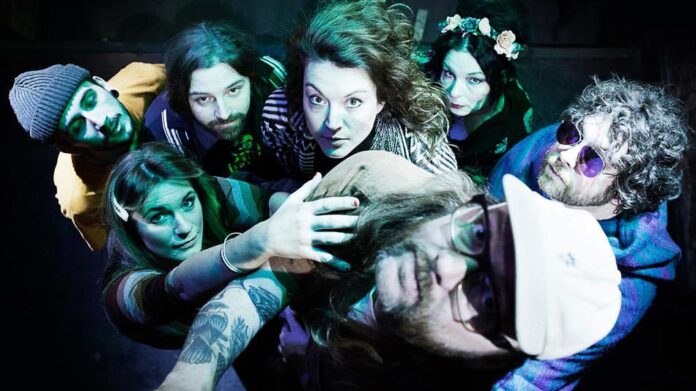 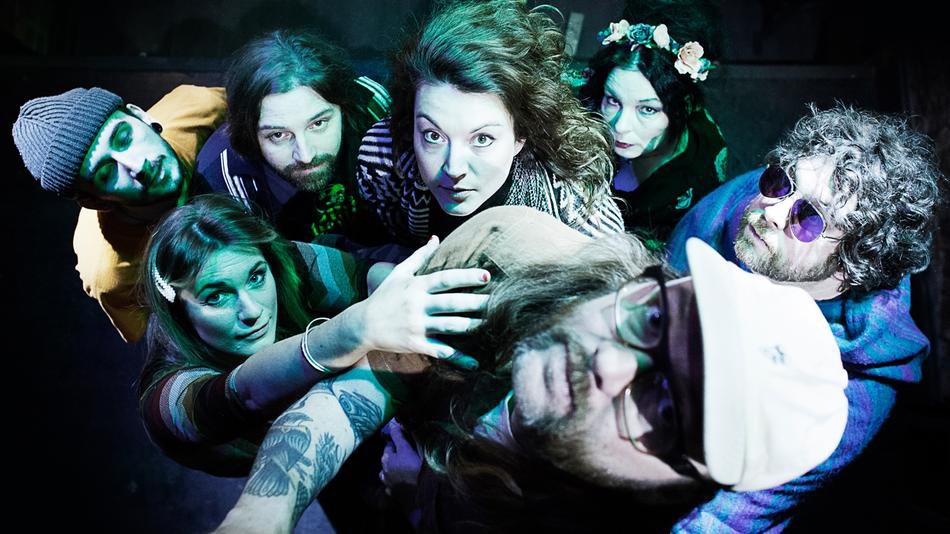 It’s Freya Thomson’s first review for Louder Than War, as she experiences the sell-out show for Psychedelic band Heavy Salad in their hometown, including a DJ set from Pins.

Psychedelic cult collaboration, Heavy Salad – comprised of core trio Lee Mann, Rob Glennie and Allan Hutchinson together with Ally McBoo, Esther Maylor, Lucy Hope (The Priestesses) and Oscar Remers – are starting out on a headline tour in support of their imminent new single Psilocyberman which is due out on 11 February.

The air is heavy with anticipation as the assembled YES crowd wait for the first hometown show from the psychedelic popsters since the days before the pandemic. The show is sold out and why wouldn’t it be. Heavy Salad could actually be the cure for Covid – what a prescription: a little bit of pop, a hint of soul, a tablespoon of psychedelia and a massive dose of psilocybin.

Tonight was also a chance for the band to sprinkle into their live set some new tracks pencilled in for their upcoming second album Long Wave, which is planned for October release. So, it came as no surprise that the set kicked off with the new single, which the band themselves describe as “The tale of an everyday cyborg who is awakened from his electronic trance using the magic powers of psilocybin (aka “magic mushrooms”). It is a great hook-filled, fun way to start proceedings and should have no problem in winning them new converts to the cause when it is released.

Without taking a breath, it’s straight into a couple of old crowd-pleasers. In Inner Visions, lead singer Lee Mann sings about polar bears, levitating pyramids and dreamlike visions to angular guitar played with post-punk venom. The power-pop of Routine Dream follows straight on and the crowd are gripped.

Psychedelia runs deep in Heavy Salad, from lyrical content to trippy album visuals, to the third eye painted on Esther Maylor’s forehead. However, the band have not confined themselves to the psychedelic sound: surf rock, post-punk, gospel, pop and funk are all ingredients in their potent brew. The newer songs do nothing but emphasise this eclectic range of sounds and influences.

As the set passes in a psilocybin haze, the band sign off with another old favourite Battery Acid and the crowd are absorbed. The band emanates good feelings and not taking life too seriously – they remind the audience to do the same… and maybe even join the cult?

The new single Psilocyberman is out on Friday 11 February on the band’s own Mal Loco label, with production by the legendary Stephen Street (of Smiths, Morrissey and Blur fame) they look to be moving in impressive circles.

Heavy Salad are running a Kickstarter campaign to enable the band to travel to the US to play their first American date at SXSW in Austin, Texas. Check it out as there are one or two exclusive goodies to be had for helping out.

Words by Freya Thomson, you can find her author profile here.
Press photo provided by Thom at Sonic PR.