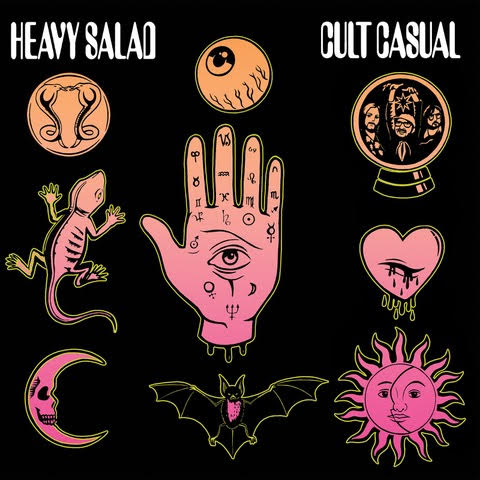 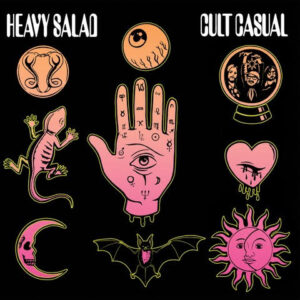 Heavy Salad arrive on the scene with a glorious mix of all things pysch, gospel, soul and all things funky with their spot on debut album. Wayne AF Carey reviews…

I caught Heavy Salad live supporting ARGH KiD last November and got a really good vibe that night due to the beefed up sound of the gospel tinged backing singers ‘The Priestesses’ adding to the funked up soul vibe that always shine through on tracks like early song Battery Acid. This release is the culmination of getting their heads down with Christophe Bride (Spear Of Destiny, Theatre Of Hate, A Certain Ratio) at Oxygene Studio down the road from their East Manchester base. Other notes to take in are Ross Orton who has worked with Arctic Monkeys and just produced rising stars Working Men’s Club album. They also boast Lee Mann, bass player live for Moonlandingz.

They describe themselves as a cult with no rules, hence Cult Casual. A loose concept album of sorts, Cult Casual explores the idea of finding your own reality in the modern world. The album takes the listener backwards through the very experiences of existence. Imagining after life experiences to apocalyptic visions of the future, via hallucinogenic nights plagued with polar bears and conversations with the AI on your phone, it’s quite literally the journey of a life time.

“You could loosely describe Cult Casual as something of a concept LP” explains lead-singer Lee, “lyrically, it’s an exploration of the experience of modern reality, it feels like the LP exists for this exact moment in time, we can’t wait for people to hear it!”

Death kick starts the whole album with some ‘Bah bah bah doo wop’ backing from The Priestesses with Lee’s smooth lyrics talking about being in outer space that launches into a trippy chorus backed with some crushing guitars. Battery Acid is just a pure funky buzz lined with trumpets and a proper catchy drumbeat. On a par with Super Furry Animals at their best. I’d even go for Frank And Walters here. Infectious as fuck with a baggy groove for all you Madchester lovers out there.

The Wish picks up the pace with a great intro and a chorus that thrills. They’ve got the hooks of Ash and a hint of Blur going on here. A cracking guitar riff that oozes with, dare I say a Britpop sound. Inner Versions keeps the pace rolling with a tribal drumbeat melded with a great hook and lyrics that feature being freaked out by fuckin’ polar bears! Nice guitar solo that gives this song a whole classic indie feel.

Reverse Snake has a lovely distorted bass that whomps into a mad psych drumbeat and an echo chamber of mad vocals. The funk kicks in here and the backing soul vocals give this tune a proper sound of a band enjoying themselves. A proper groover and shaker. High Priestess kicks off with a drum beat not far off Honky Tonk Woman then grooves in with those smooth lyrics from Lee, a lovely guitar backing that twangs beautifully until the chorus of “High Priestess!” lifts you up. Surely a live favourite coming soon to your venues…

This Song Is Not About Lizards is the weird one. Take a nod to Cabbage taking acid with The Coral and you get the picture. A great tune that has hints of that Zappa madness. It twists and turns and sounds like a pysch trip into the underworld. And it is about Lizards, the lying bastards! Very nice! Routine Dream is a belter. Tribal drums, tribal vocals, that repetitive sound of The Fall yet filled with lovely psych layered guitars that hold it all together. Martin Bramah of Blue Orchids would love this one!

Slow Ride is like a country tune that flows smoothly with that backing from The Priestesses. They are the glue that make this band who they are. When I first heard Heavy Salad on earlier releases I knew there was something missing. This is it. The cog in the wheel they were missing. It’s OK To Bleed ends the album with a beauty. It’s got all the hall marks of Spiritualised who happen to be one of my favourite bands so I’ll give it the nod. A mellow shimmering affair that doesn’t go too technical and hits the spot with the slow tempo and great chorus.

A nice end to an album that twists and turns. They’ve picked from a cannon of great songwriters and used it to their advantage to create a collection of songs that stand out from the norm. An impressive debut that delights your ears…