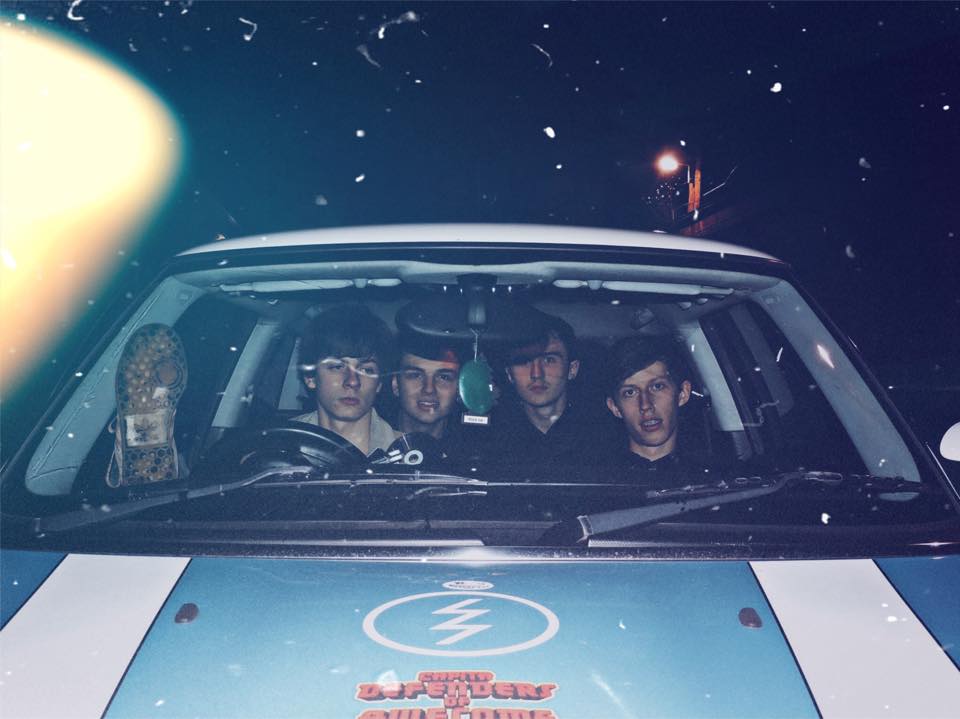 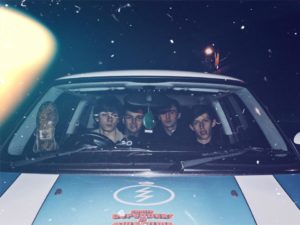 Formerly known as The Telermen, Glasgow’s new rock stompers Heavy Rapids are blazing a thick trail on the music scene as one of the top new bands in the UK.

With plenty of full on swagger, style and rock & roll, they have recently released their debut AA side single containing the tracks Rascal Capsule and Flourish With Time, and are busy writing further material and looking forward to playing more gigs.

Matt Mead catches up with the band for an exclusive interview for Louder Than War.

Louder Than War: Can you remember the first music you heard?

Jamie Crawford: The Who: My Generation

What was the first proper music you got into?

Dillon: I really got into Kasabian around the time of Empire, what a band by the way, they never disappoint. A huge influence on the sounds I incorporate in the blend of my guitar.

Were your parents big influences on you in regards to music when you were growing up?

Jamie: Yeah, my Dad has played guitar all his days and has been crazy for music all his life. I eventually asked for my first instrument, which was a drum kit. My Dad bought me a guitar instead. So yeah, big impact. Might’ve not formed the band. Two drummers is quite an issue, unless we were parading.

What made you pick up the instrument you currently play? Who were your influences whilst you were learning your instrument?

Johnny: I started off with one of those electric drum pads from Argos or something. I got fed up of table top drums and it was time to invest in a drum kit. I started out with a beginners and I’ve now worked my way up to quite an epic kit.

My key sounds are my snare by Natal & my Zildjian K Series Cymbals. Some dark, some light, sounds mega.

Ever since I’ve had the kit, I’ve been watching music festivals and going to gigs and dreaming of being like one of the greats. Getting into a band makes you 100 times better at what you play and I believe performing in Heavy Rapids has got me to a great level of drumming.

Have you all known each other for some time?

Dillon: We certainly have. I grew up playing football with Jamie, in the local team, Johnstone Burgh. We did primary and secondary school together too and attended many many gigs together. I currently study Sound Production with Antony at college and we’re both looking to move onto Sound Design in Edinburgh. I’ve known Johnny for a few years now, we met at our mates Noah’s house years back and we’ve stayed great friends since. Jonathan and Antony went through all their school years together and have always had a great friendship. It was just though the general whereabouts of where you were or what we did that brought us together. It’s nice like that. We’re all best mates and I’m really grateful for it. 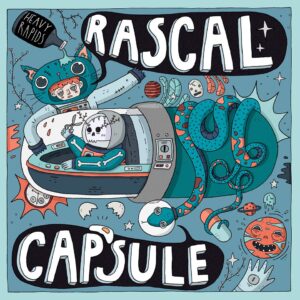 Were you all friends at school before forming the band?

Why did you decide to form the band?

Jamie: After having the silly years of finding the right people, Heavy Rapids was formed in 2017. We decided to do it because we are all really f**king good at our instruments and that deserves a band. We have big ambitions and hope that it all floats the way we want it to. We work hard, respect each other and the people that we work with. The industry is all about respect. Ultimately, we wanna make some ear joy for the people!

Where did you play your first gig? How many were in attendance?

Tone: As Heavy Rapids, we headlined Broadcast and sold out the venue, it was a great starting point for the new vibe. I think it holds about 200 in there. We had a riot of a night. Loved it.

You have supported Blossoms on some previous tour dates. How did that happen?

Dillon: Yeah, we played with them most recently in Brighton. It was just before they headlined Concorde 2 for The Great Escape. It was one of our favourite shows! We were also local support for their King Tuts show too, this was before they blew up. This was as The Telermen, before things changed. We’ve always been good friends with Blossoms and they are a huge asset to us. We really look up to them as our superiors. They work their arses off and deserve everything they have achieved. They should’ve took that Brit Award easy, but votes are a load of baloney. Their music is outstanding.

Who writes the material in the band? Or do you all Jam our demos before recording?

Tone: The songs are a collaboration of the entire band suggesting different ideas and trying different versions of them all, eventually a structure will fall into place, we try to make every part of every song sound different. Once we get that down, Dillon will piece lyrics together to fit the attitude the song. Or vice versa, lyrics will come first and music will be placed around it.

Where have you recorded your material so far?

Tone: GORBAL SOUNDS, Glasgow. It’s mint in there. We’re gonna be doing some new tracks again there soon. Be ready!

Who are your music influences at present?

Johnathan: All our influences range quite a bit, Jonathan is really into drumming styles from bands like AC/DC, Pink Floyd, The Police. Jamie is very big on bands such as The Who, Arctic Monkeys, Oasis. Antony loves The Beatles, The Clash, Tame Impala and Green Day. Dillon is influenced by bands such as Led Zeppelin, Green Day, Peace, Pond, The Courteeners, Cabbage and Blossoms. There are so many we are probably missing out but thats a good idea of the favourites.

What are the next plans for the band?

Dillon: Next up, is to have a good run of festivals this year hopefully. We’re also going to start working with This Feeling Promotions. They do bands a lot of justice and we really hope we can have a great time working with them. We’re gonna deliver some more excellent music this year and most of all, we’re gonna enjoy ourselves!