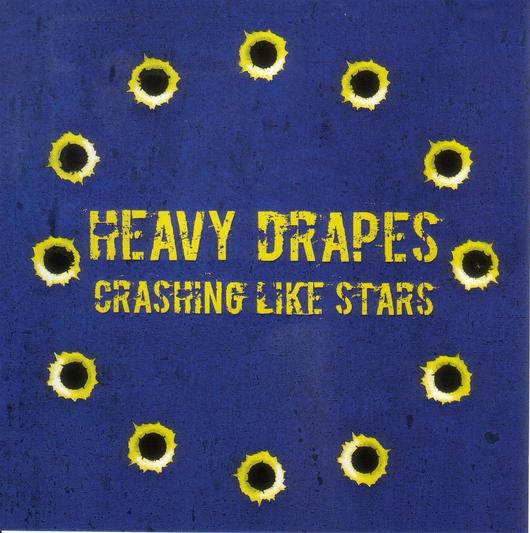 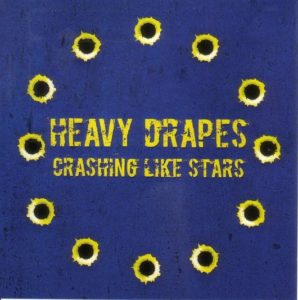 In a year when we lost Mark E Smith and Pete Shelley, one of the most tragic and unexpected deaths in rock was the passing of Garry Borland, frontman with Heavy Drapes in June, making this a posthumous album and the summation of everything he had been working towards…

Never met the bloke. Never saw them play. Still cried at the news of his passing. He was a punk-rock soul-brother…

Everyone still going to gigs and following the ‘Rebellion’/’Vive Le Rock’ Punk scene knew his name and the band, even if they hadn’t seen them.

Cocky bastard.  Poser.  Cross between Lydon and Liam.  Seditionaries shirts and big shades. He was a star. Old-School style.

Heavy Drapes had a foot in the past, but looked to the future…

Crashing Like Stars is Garry Borland and his bands recorded legacy -his epitaph and a ten-song punk rock album which should’ve been the start rather than the end of Heavy Drapes.  What the rest of the last gang in town, Richie, Billy and Jerry do next is open to question… but I’m sure they are very proud of this album.

It is a great collection of driving, anthemic punk rock’n’roll and probably one of the most immediately exciting albums of its kind for twenty years.  Never Mind The Bollocks and Generation Terrorists probably had ten times the budget and Crashing Like Stars aspires to be as inspirational and dynamic as they were – and succeeds on a basic, gut-level.  Musically it is solid and rocks at a proper chugging pace (rather than mistaking speed/thrash for punkishness).  There are Glam and Grunge influences, a touch of Oasis, a flavour of New York, but their own sound and personality is there.

They knew from the outset they could never have the impact of the Pistols or  a receive the support the Manics got, but their mission to be the Last Great Old-School (‘Fuckin’) Punk Rock Band has been accomplished with this album – with its perfect cover art and gun-slinging songs about lust, ego, life, living and rebellion.

Heavy Drapes were part of a lineage of great rock’n’roll bands who took the fury and majesty of the Sex Pistols and incorporated it into their sound as well as ethos.  The Godfathers, The Manic Street Preachers, Compulsion,  The Towers of London…yeah OK, the last is a dodgy one.

A key element was the Steve Jones/Chuck Berry guitar sound and the big, roared chorus  and the fact that despite whatever label: punk, rock’n’roll, sleaze metal – this is basically pop music – with the potential for mass appeal and popularity, Slade or Oasis style.  Jukebox music for drinkers and party-people as well as punks and metal-heads  ( Which is why punk-snobs and hipsters would sneer at or disregard Heavy Drapes…).

There is also a strong Detroit (MC5 / Stooges) and New York (Dolls) feel and dynamics going on – which was never a cynical ploy to target-the-American-market, but because those were the bands the Drapes collectively love.

Half of the album has been available before on the Tarbeach EP and single – but now it is a complete, streamlined, sleek, cohesive album which you just have to hear from start to finish.  There is not a weak track , it’s one ten-peak highlight. Make Some Trouble – the fastest, shortest, sharpest cut is saved until last. The second it finishes you just have to start again…

It doesn’t need analysis or intellectualizing, it just rocks and is elemental stuff.

Vive Le Drapes.   A great band who achieved a lot in a short-time – the band and Garrys family should be very proud of Crashing Like Stars.

Buy from HERE,  on the Cadiz label, currently it is only available on CD.  There must be vinyl on the way surely…?

Ged Babey talks and plays his pick of the year on The Flash Digital Radio station on Thursday 20th Dec  from 9 pm – Heavy Drapes are likely to be featured.