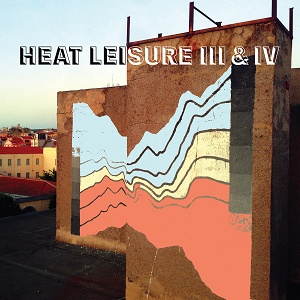 There are quite literally two sides to the new album from Heat Leisure, the collective made up from members of Pontiak, Guardian Angel and Beach House with the addition of Robert J Otten III. Sid one has III span its breadth and it’s a wonderful monster. The first six and a half minutes are taken up by the rambling monologue of Ken Babbs (Merry Prankster, Grateful Dead) as he takes us through an episode of intriguing and often amusing musings with an accent not dissimilar to that of Johnny Cash.

As the voice reads, a synth gurgles underneath before being superseded by a dramatic cascade of incessant percussion and pounding guitars and drums to a climatic end. It has to be heard to be believed. Apparently containing high levels of improvisation (you really wouldn’t know such is the chemistry between the artists) as well as organs and samplers, III is one of the delights of the moment.

The album was recorded on the farm belonging to the Carney brothers (Pontiak) with Lain Carney in control of the engineering. Whilst recording the album on 1” tape the ancient reel caused sounds to uncontrollably speed up and slow down creating wonderful effects which were enhanced as part of the album.

Second track (and side) IV is less cohesive and whilst still interesting, it maybe lacks the power and charm of III. After a slow, sometimes off key intro, treated voices echo over a trip-hop beat which extends into manic percussion with a buzzing bass sound underpinning the proceedings. Halfway through it breaks pace into a more subtle and constructed piece where near tribal drums and floating keyboards create a semi-ambient atmosphere.

Heat Leisure have created a very listenable and addictive album which is both original and compelling from the first word to the last note.