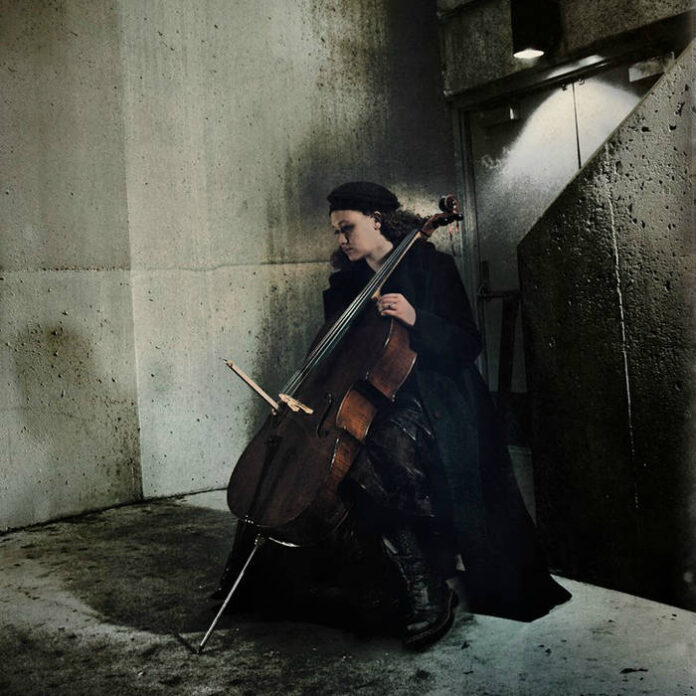 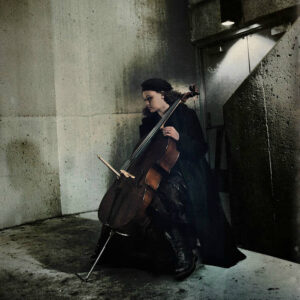 A darkness emits from the flowing river that is the cello that spins from within.  Freya might be cloaked in black, face in porcelain white – a merging of music with theatre – a sophistication, a mystique, and a raw beauty that seems to vocalise the hidden depths that we might not know exist.

She has toured with former Belly, Breeders and Throwing Muses guitarist and songwriter Tanya Donelly.

Freya pushes the boundaries where her art is concerned, and has developed her work ‘Juxtapositions’ which aims to bring classical music to the contemporary spaces of modern day life – in doing so, her music is able to inhabit otherwise empty places, and bring new meaning to these spaces.

And it is this interaction between music and place that has fuelled Freya’s motivations to record a debut solo album dedicated to the San Francisco Bay area and San Jose.  Historically, musicians and songwriters have weaved reminders of localities into their work – marking as anchors to either autobiographical or collective memories.  Leonard Cohen did it with Manhattan, Lucinda Williams with her song Copenhagen, The Kinks with Waterloo Sunset, and Beth Orton wrote Paris Train.  The concept of home and conversely, travel and transience of existence and our placing within time and space, is something that music conveys whether it be lyrically as a direct reference or an abstract depiction via instrumental-only means: as with artists such as Sigur Ros, Mogwai, and now, Freya Seeburger and her cello music, Cellista.

It is often the invisible connections we feel, a grounding of who we are, of our existence.  And Freya brings these emotions and thoughts to her music, as an extension of the community she has found within the San Jose area.

“I’m very much influenced by the collaborative and innovative community of hip hop and a lot of what I do is influenced by a gig I played with a group called the Coup (based in Oakland/SF ).”  Freya explains.

Her Kickstarter funded album will be recorded between Tiny Telephone studios in San Francisco, and Anno Domini art gallery based in San Jose.  Tiny Telephone studios were founded by John Vanderslice, whom has worked with many artists including Oklahoma’s Samantha Crain as well as Jolie Holland, Bob Mould and the Magnetic Fields.  Incorporating sound-scapes created from the voices of Bay Area residents, and a spontaneous session recorded at an art gallery, the final album will pay homage to the place that Freya has found inspiration within.  A sonic reflection of lives lived within a certain time and space.

“This album is about my dedication to the arts and to collaboration and to San Jose – my first love.  This album is also hopelessly devoted to you.”  Freya Seeburger, on her upcoming album.

Find out more here: cellista.net. And here’s the Kickstarter.