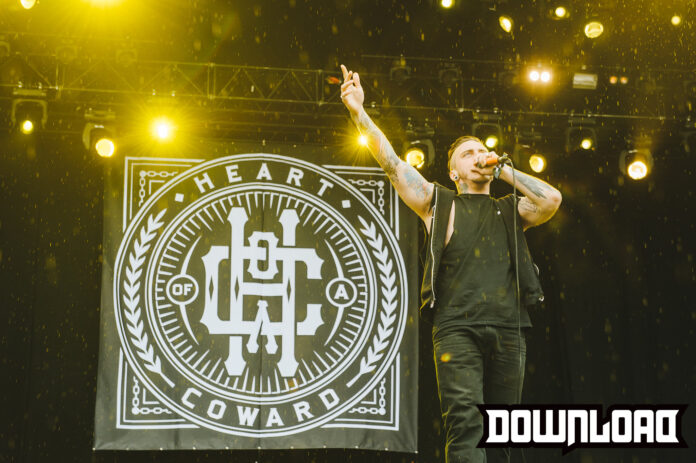 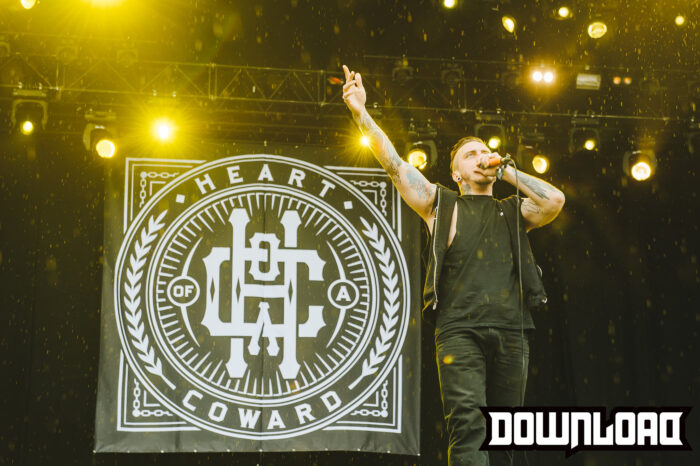 Milton Keynes based metal quintet Heart Of A Coward have come a long way since forming in 2009. The band played at Download in 2013 and returned this year to open the main stage on Saturday morning. Louder Than War’s Alan Ewart caught up with the guys shortly after their set to find out how they felt it went for them – amongst other things.

After facing a list of hinderances that would have broken a lesser band, Heart Of A Coward have proved that they have the heart of a lion as they took the main stage by storm, grabbing the soaking wet and hungover early day audience by the throat and shaking then into life, ready to face another day of top class Download revelry.

Heart Of A Coward were still buzzing from their set as they told me “to open the main stage today was simply unreal, this is something that we have always dreamed of doing but we never thought we would get to do it.”

Jamie continued, “the reaction of the audience was incredible, we are just so happy.  We looked out from backstage before our set and saw this vast empty field and suddenly there were thousands of people running down the hill jostling for a spot near the front.  It was amazing how quickly it filled, it’s just awesome.  It looked like something from ‘Braveheart'”.

Heart Of A Coward confessed that they had arrived on site early to see Slipknot and loved their set despite the torrential downpour.  “There comes a point where you just can’t get any wetter so you might as well just go with it and enjoy the show.  Slipknot were incredible.”

I put it to the band that whilst their sound was heavy it was also quite melodic. This was something that they identified with.  They told me, “yes that’s right.  It comes from the influences of everyone in the band.  The drummer is into post-rock, I’m into straight up metal.  Everything gets thrown in and that’s what comes out. Especially on the new record.”

They continued “we usually start by writing riffs then everyone throws their ideas in.  We think it’s important that everyone contributes.  If everything comes from one person then you are limiting yourselves.  For us on the last album and the one we are about to release it has come out exactly as we wanted it to.

“Sometimes we will add a drum track on the machines and the drummer will say ‘I can’t play that, it’s not humanly possible, I only have two arms'”.

Heart Of A Coward tell me that the new album is already laid down and mastered and they are working with the label to set a release date, probably sometime late in the autumn.  They have a few surprises in store for their fans when it does come out.

“The new stuff has a lot more pace.  The last album was quite ‘dirgy’ and a bit slow.  This one is more in your face, more power and it has a real live feel.  The melody is still there but one of the key points is that we want the songs to translate really well live.”

Heart Of A Coward are looking to take the new album on the road once the release date is finalised.  Before that, fans can see them headlining Techfest in July and they have a number of festivals lined up in Europe and in Ireland over the summer months.

Heart Of A Coward are a great live band and they seem to know exactly where they are going.  They have the support of a great PR team and a super label and if the reaction of the Download crowd to their set is anything to go by audiences across Europe are in for a treat this summer.

I look forward to catching Heart Of A Coward in a smaller venue when they take their new album on the road later in the year.  They are fully justified in being proud of what they have achieved so far and I am certain that even bigger things lie ahead for a tremendously good band.

All words by Alan Ewart. You can read more posts by Alan at his Louder Than War author’s archive. Alan’s also to be found at his blog soundofsummer.org and you can follow Alan on Twitter as @soundofmysummer.