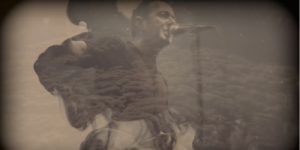 This is a thing of great beauty – the demo of This Is England without all the added nonsense that cloaked the raw genius of that many believe to the last great Clash song has emerged on the upcoming posthumous box set Joe Strummer 001.

If that link doesnt work watch it here

Three Clash members – Strummer, bassist Paul Simonon and drummer Pete Howard – appear on the 1983 recording, dubbed “Czechoslovak Song / Where Is England,” which offers a more organic, energetic approach to the song later reworked for their sixth and final LP, 1985’s Cut the Crap complete with different lyrics from Joe’s classic state of the nation address.

Throughout, Strummer howls in-progress lyrics – “In a catwalk jungle, no one to give alarm/ Catwalk jungle, somebody grabbed my arm” – over Simonon and Howard’s loose reggae-tinged sparse groove

Joe Strummer 001, out September 28th, includes material Strummer recorded outside of the Clash – including solo tracks, material with the 101ers and Mescaleros and his first post-Clash recordings with former bandmate Mick Jones. The compilation also features the recently issued (and previously unheard) “Rose of Erin,” which Strummer wrote for the 1993 Sara Driver film, When Pigs Fly.
The package is also available as limited edition deluxe CD, vinyl and digital download. The book accompanying the box set and deluxe CD includes “rarely seen and previously unpublished memorabilia from Joe’s personal collection as well as historical press reviews and technical notes about the albums.”