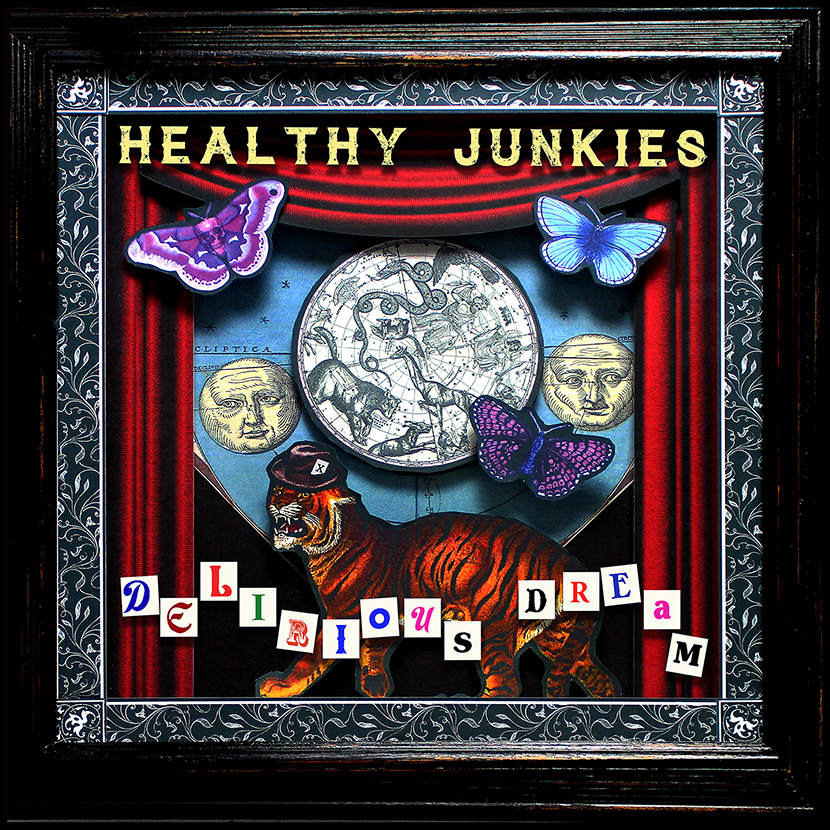 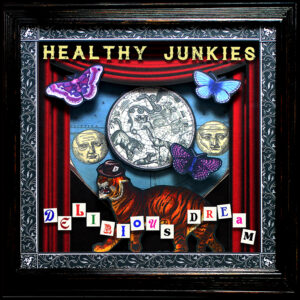 The butterfly effect details how small actions can have a significant impact a great distance away. Be it the way that the flapping of a Lepidoptera’s wings can create a tsunami or how a band’s goodwill to its local scene can result in a steadily growing fan base for them an ocean away. The latter dynamic applies to Healthy Junkies. The quartet have overseen their own successful Punk Rock & Roll Rendezvous nights in North London for the past six years. These monthly events have been passionately curated by Nina Courson and Phil Honey-Jones, the band’s lead singer and guitarist, and help provide a valuable introduction for local and out-of-town acts to the capital’s music scene. In fact, it was via one of these very evenings that this reviewer first became acquainted with the band. Whereas the bills they put together are fuelled by a charitable streak, the foursome’s impact live has been carefully honed and based on hard graft. Honey-Jones effortlessly manages to create a wall of sound via his Gibson SG while Courson captivates with sultry vocals and a presence that recalls (and predates) Arrow de Wilde from Starcrawler minus the blood spillage. Add into the equation a tighter-than-cramp rhythm section and the result is a band with a formidable live sound. But how does this translate on record? 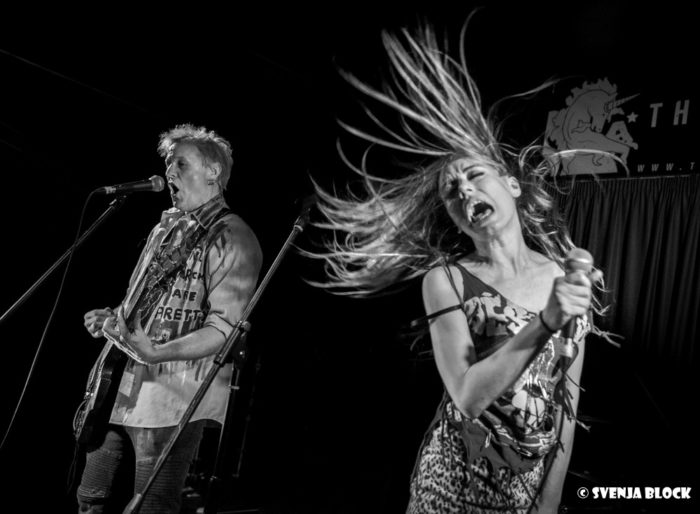 Delirious Dream offers 15 songs and a running time of just under 55 mins. This gives an indication that the group are reverential to the craft of song writing and attentive to the power of solid arrangements. The album was recorded at Bark Studios by Brian O’Shaughnessy who recorded Primal Scream and My Bloody Valentine at this very same facility in the 1990s. Unsurprisingly, the lush production that you’d associate from those seminal band’s releases is in full evidence here. The dynamics of the band’s live delivery have been augmented with the tasteful addition of keys and synths. These are most apparent in the dropdown of the glam-tinged Juliet’s Call and in accompanying the chugging opening chords to When All Is Said And Done. Honey-Jones’ guitars provide an energetic binding agent that helps meld together goth, glam, grunge, punk and psychedelic sensibilities. On the aptly titled The Sound Of My Guitar, a Sisters of Mercy-styled riff (circa Temple of Love) gets mashed up with an ‘all downstrokes’ rhythmic attack that pulsates like Matt Bellamy tackling a Ramones song with added minor chord accents. Similarly, Tony Alda’s bombastic skin bashing runs the gamut between Crass and Copeland. The snare attack during the guitar solo on Johnny Demented is a sonic cousin to the former’s Banned at the Roxy while Ghost Without a Soul’s quirky hi-hat patterns recall the latter’s early work with The Police. Dave Whitmore’s bass balances a solid foundation with an aggressive prominence that’s showcased most effectively on the Steve Harris-meets-Tim Commerford delivery on Meet & Greet. Meanwhile, Courson adds top line intensity most effectively when she deviates from her trademark seductive restraint. This is particularly evident on Some Kind of Girl, where the urgency of being “lost inside your lies” is conveyed by a highly-pitched melodic screams, and Boy or Girl’s upper register delivery. In addition, Honey-Jones’ backing vocals provide a tight harmonic anchor and also take centre stage on This Condition. Adding vinegar to the recipe is a cover of Nancy Sinatra’s These Boots Are Made For Walking that Courson and Co. have managed to make their own. 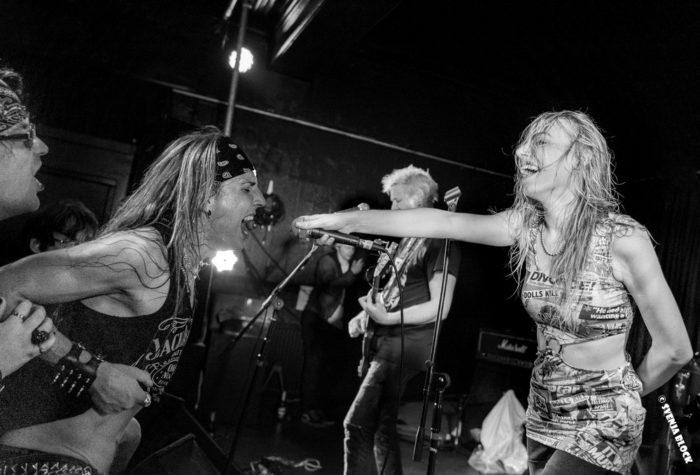 Delirious Dream would have benefitted from having a greater investment in its material and being arranged to enable Courson to take it to another level both in delivery and key. Playing it safe on this front may be the culprit but the restraint I referenced earlier has highlighted a missed opportunity for the band. 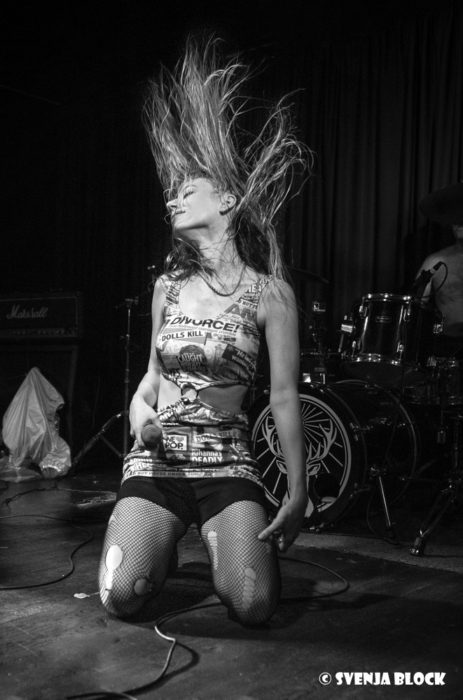 With songs that bring to mind the likes of The Runaways (This Is Not a Suicide) and Blondie (Juliet’s Call), it’s not surprising that Healthy Junkies are now championed by legendary LA-based DJ Rodney Bingenheimer (the John Peel of the USA). Thanks to his support and the unflappable dedication of the band to their craft – Healthy Junkies will soon embark on their first tour of the USA. The aforementioned butterfly’s wings have created a veritable tsunami of interest in the band on the other side of the pond. But this success has not been easily won but painstakingly earned through countless European tours alongside supporting their local scene in London. At the risk of mixing metaphors, Healthy Junkies’ wings have created a storm abroad that’s come back to them like a boomerang to propel them further. 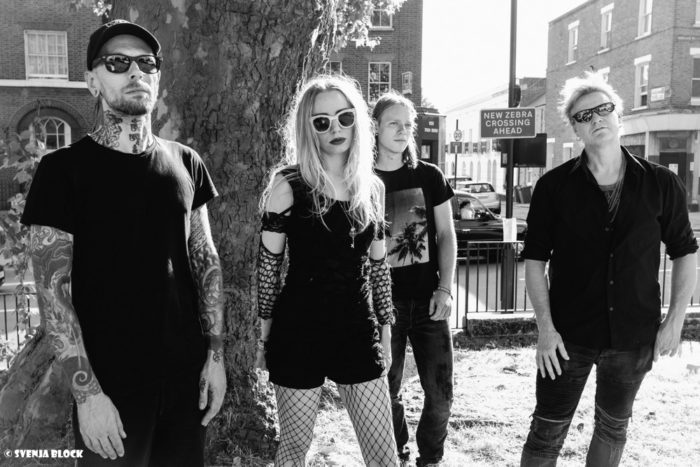 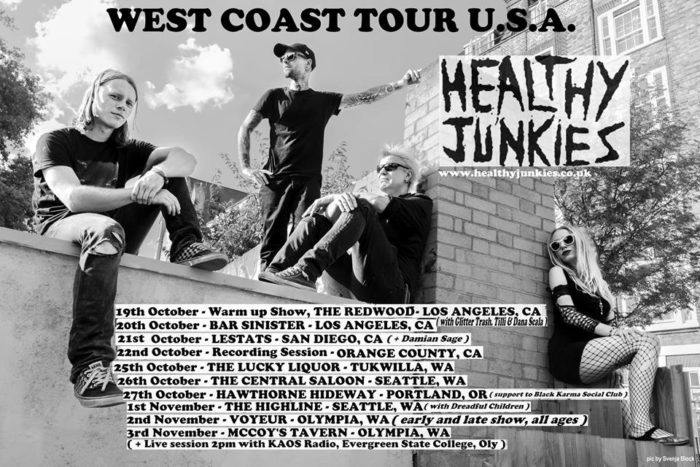 Watch Healthy Junkies’ video for The Sound of My Guitar here.

Get your Healthy Junkies fix here:

Additional photos © Svenja Block. You can find more of Svenja’s photos at her Pixieset, Facebook and at her Louder Than War author’s archive.