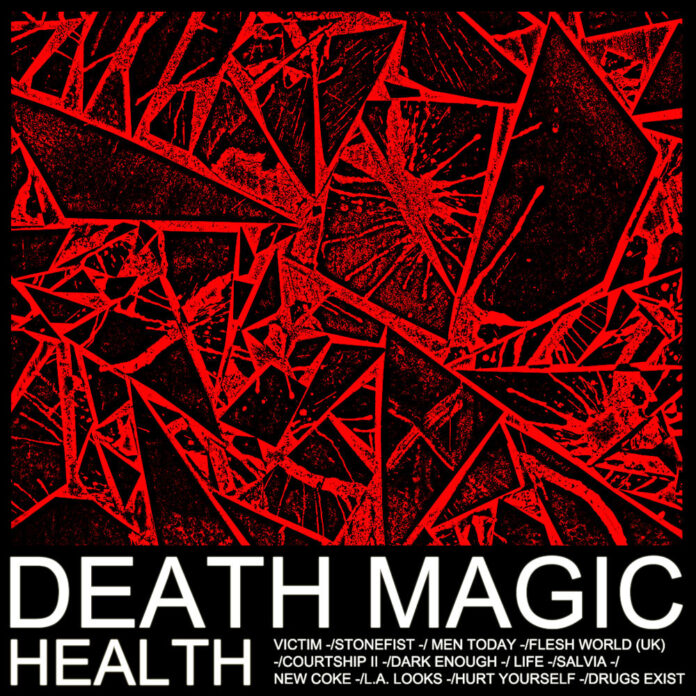 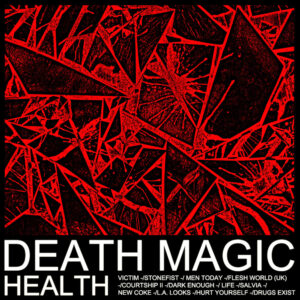 Death Magic is Health’s first new album since their 2009 release Get Color, though they also scored the 24-song soundtrack for the widely popular Max Payne 3 videogame, which has sold millions of copies, in 2012. So it’s safe to say this is an eagerly awaited album from the noise rock band. Lisa Sookraj reviews.

Through the incorporation of electronic elements and more vocals, Get Color was notably more coherent than Health’s rock-driven noisy debut. As their 3rd album emerges, it’s clear that the high-contrast approach to the artful racket on Get Color was the band’s peak thus far – atmospheric, textured with clashing emotions, unnervingly calm vocals met harsh noise elements amidst interesting compositions. “Die Slow” was the highlight, a honed use of the collage sound the band mastered on their sophomore album, with its sustained-climax effect throughout the track and phat beats between buzzing jolts of industrial adrenaline. It was evocative, well-balanced, multi-dimensional and proved Health’s experimentalism was by choice, not an inability to produce a track with addictive properties.

Death Magic takes things even further in that rather logical direction. More conventional, conscious and with more prominent vocals and melody, the cost is the loss of a considerable amount of Health’s experimentalism and boldness. The band has however kept with their previous two releases as far as evolving and keeping things stimulating, though this time their sound has moved into the territory of more club and radio-friendly EDM. At its best, the album has a darkwave meets trance feel with some patiently atmospheric concerns intact, at its worse, it has a more conventionally mainstream pop/EDM feel.

Some of Death Magic’s finer moments nod to the band’s melodic electronic and industrial heroes, Depeche Mode, Crystal Castles and NIN. What comes through even more notably are Health’s penchant for current pop and the influence of Kanye West engineer Andrew Dawson. Of course, Health haven’t created an album of trite top 40, but songs like “Life” and “L.A. Looks” in particular are the most radio-friendly tracks they’ve released to date by a longshot, exhibiting potential for use in cheesy commercials. Likewise, the heavily produced vocals on the pedestrian “Dark Enough” could belong to almost any pop artist today.

The most successful tracks are those that consistently feel closest to Health’s pre-established experimental core – like the asymmetrical “Courtship II” with its slick switch in stride mid-track, the apocalyptic battle of jagged beats on “Salvia” and “Men Today”  – or those that deliver a synth-pop/industrial hybrid sound, strongest on “Stonefist”. The scissoring rave beat that fiercely punctuates this song feels the way one might hope Health forging their way into danceable music would. If this approach wasn’t overshadowed on other tracks by the poppier production aspects, foremost vocal treatment (i.e. “Flesh World”’s sentimental, clubby chorus vs. the surrounding darker landscape) – the whole album would cut deeper.

The title ‘noise rock band’ doesn’t seem fitting for Health anymore. They’ve largely shed this connotation, as while remnants of noise remain, they might be present as an obligation to old fans or as a bridging strategy. They’re sharp and polished through production, embedded within more commonplace song structures alongside sentimental melodies. Less complex and layered, Death Magic has the potential to widen Health’s reach to various sub genres of EDM outside of the niche indie/experimental/noise scene, likely losing at least some of those old fans in the process. Health’s previous two albums were largely for music nerds that could appreciate the band’s technical abilities and drastic deviations from convention. Their latest effort strays far enough from the norm to impress fans of mainstream electronic music open to change, but it’s less likely to satiate noise junkies who were waiting for something more extreme from the band.