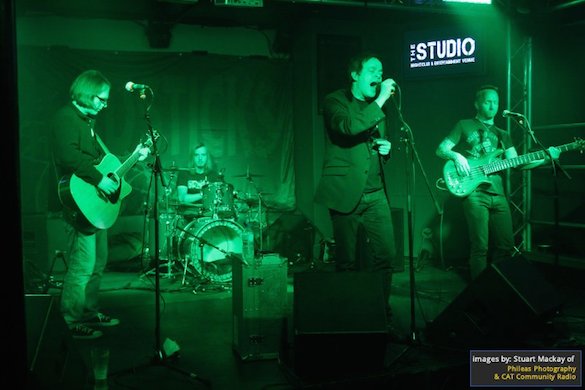 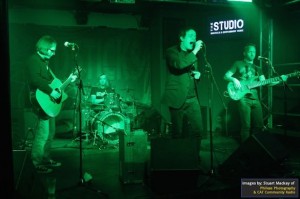 Headsticks are described as being “where folk and punk collide to provide a passion infused commentary that is as raw and honest as it comes…”. They recently played a date as part of Nantwich Music Festival, Louder Than War’s  Rebecca Sowray was in the audience.

Headsticks are a slice of life itself.

And perhaps never more so than when they opened this gig with A World Away (From You). The opening guitar line, confident and melodic, has folk’s handshake familiarity that then lands on its feet in direct vocals; gentle and accurate, giving life to a filmic image: “They’re throwing bricks again, throwing stones.” As that first verse closes though we’ve crossed territories, run with a punk army knowing that, as the chorus has it, in the world they’ve just drawn, we “wouldn’t want to be anywhere else but a world away from you.” So – one part rock, one part folk and mixed with the spirit of punk – they make a mystically clever thing. Their music takes anger, makes it thoughtful; demands that you take sides.

I left impartiality behind anyway when I saw Headsticks play a support slot at the Box in Crewe in November. Now, there are as many sorts of listening as there are types of music; but are there those ears you reserve for new music? You’ve all your senses turned up full waiting for the results; the Will-They-Won’t-They test? Do they do that thing? And they did that thing. They were good, really good. And a music tribe rule kicked in: If you’ve seen a band twice you’ve fallen for them. You’ll press their music on anybody – your neighbour who plays classical piano or your granny who quotes Joy Division. Because you never know where tunes will take root.

Headsticks carry their own cause well. Andrew Tranter, as lead, works hard to get that dialogue with the crowd going. So when he asks, before the second song:

“Is there anybody in love out there? Have we got any couples in love?”

“Or maybe we’re all married”… he suggests. There’s some laughter, maybe a little squirming. It has the desired effect as they carry us into the darkness of Wishing, a love triangle with your best friend’s missus. Even in the middle of the quick, neat step of folk’s circling tunes there’s a dark humour resting in the unlikely corners of life’s horrors.

This is music that provokes; it means to start something. It’s not comfortable or trite; it’s the beginning of a story about the world around us and the local place. So it was particularly good to see Headsticks in Nantwich, close to their Stoke-on-Trent home. And there was another repeat for me that night; it was also my second year in Nantwich for the Jazz Blues And Music Festival. This is a proper treasure. Local, musically diverse and startlingly good value. There was lots of access to lots of bands. Headsticks played the Studio and it’s a really well presented venue. The place is a bold re-opening of a familiar space and they’re aiming to offer a home to live music in the town. There’s a good bar, friendly confident staff and a slick interior that balances nicely between funky and kind of neat. And it was well populated for Headsticks’ set.

Headsticks really work the contrasts which they pile up on the foundations of rock guitar and rhythms and the desperate full volume spirit of punk’s origins. And the folk part means that you’re going to listen to this again and again until you have no strength to sing or dance anymore. But it’s an angry hymn to the local now with Are You Feeling Great, Britain? rasping and lashing where the only gloss is in the music itself.

There’s thinking in these songs that finds layers of meaning. Ideas and ideals tucked into lyrics and the lines of music. Two Sides – there’s serious skill in building this. To offer one metaphor “We’re gonna keep the home fires burning.” One image, drawing on something tribal, close to national identity and to then to draw it howling, its insides dragged out because those fires aren’t at all what you first saw, because we “smell the rubber, smell the tar.”

I’ll borrow a line from Two Sides: “And God knows the old songs simply aren’t worth singing anymore.” It’s got to be one of the best feelings in the world; being in a local crowd, listening to new, local tunes, hearing the stories we know, that we feel as part of our lives, come to life in songs.

This is music to move you and you’ve plenty of opportunity to get out and see Headsticks. Their next gig is 3rd May at JCB Lakeside Club and then a good number of gigs detailed on their website for the remainder of the year. There is an album planned too in addition to their already released debut EP with Punch Music, available through their own website.

Headsticks closed at Nantwich with the provocative Teenage Widow. This is agit-rock; wanting and angry; needy in so far as it demands your response with no quarter for restraint or self-pity.

In the spirit of the music itself: get out there and see these guys; talk about them. Get the revolution started!

All words by Rebecca Sowray. This is Rebecca’s first piece for Louder Than War.

Photo of Headsticks above by Stuart Mackay