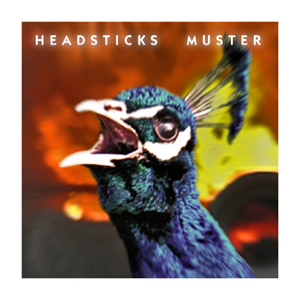 Dark humour and humanity permeate the full-on debut album by the glorious Headsticks, which serves notice on modern music as we know it. Rebecca Sowray is swept along.

Adrift on stadium rock that grew old before it grew up? Alternative has turned the corner so many times it’s become square? Has your pop lost its shine, even for a second?

Ah, you gave in and went home? Back to local? Good. Because it’s where you should be and it’s where this music draws strength from. This is what you’re missing.

If you want to cast about for labels think punk-folk-rock, somewhere past The Levellers and Billy Bragg and way, way past expectation and easy cynicism. To me they’ve a Pixies style quick change, they move house when you think you know the way.

They’ve had an EP in circulation, the first time I saw them I bought it, and played it, and it went on the iPod.

So I went to a second gig where I’ve got to confess I got the badge. So I’m a fan and waiting for the album has made me first date nervous. Would that energetic performance and shifting style translate into a full album?

So move into their Flatline Town opener because you know it or somewhere very like it. Angst grew up and moved in with these guys to carve this; drum driven with a bass guitar that crosses and binds a guitar melody line, harmonica redefined to a rock standard.

The lead vocals bring accuracy, emotion, identity. These throw our cynicism back at us; the news today with the headlines sung smug in bold and oh-so-clever to hold back with the knife at the heart of the story until a solid two minutes in. I’m not doing spoilers but “spat on, shat on, beaten, raped”, this isn’t folk’s sentimentality.

There’s a cousin to this track on the album in Teenage Widow. With the opening of a ballad for our times, a path widened by violin, the lyrics and vocals are sad and tender. But no wallowing; we’re off to the restless pain of a modern hymn.

The shifting identity thing is sharp; at one time clever and issue-driven before switching to heart wound grief as with Killing Me America. I first heard this on a cold November night with Christmas coming. I was world-weary and glum, it was a one man and his dog sort of gig but this song moved that audience like the front two lines of arena-stalker-fans.

Headsticks are a product of local with an attitude baked in some Potteries kiln that fires industrial grade ceramic, because in places Headsticks are as hard as it gets. And I might need to rethink my own comparison with the Pixies because You’re Killing Me America is a high energy, swirling, foot stamping song of revolt against subversion at the hands of the U.S. of A. Argue with them if you like, that’s what they’re for.

The best endings are bitter-sweet, like life itself. Love, within Muster, is headlong and foolish, all closing doors and missed opportunities. And it’s glorious. We all grew up and got our hearts broken. Where Headsticks invoke love then these songs are the divorce papers for pop. So my second best tune of the lot is Cold; rock’s careless step into bluegrass tinted hills; loads of unexpected turns through jangly arpeggiated guitar lines.

There’s more of that territory for those of us who’re glad-to-be sad with Wishing. Adore Headsticks for lyrics, guitar-players guitar lines, percussive terror (where needed) and for this;

“You’ve been sitting drinking whisky
You don’t even like the taste.”

You’re in a bad, bad place, everything about the music evokes that. But the twist of pain comes with,

“And you’re wishing you are in the arms of the one that I love.”

To do this to your audience, to drag them in, break their hearts, paint them as your enemy in the (probable) wrong and not lose them in the process. This I can worship.

Still, in the middle of the love-as-disaster and a world of dystopia-now there’s dark humour in the observation of humanity with Every Dog Will Have Its Day. A shifting melody starts in the opening bar, mutates through song and chorus, solidly driving holes through a local landscape where nothing is sacred. Every part in this moves to an ending played over a crowd chanting. I need to hear this live, in a chanting crowd, soon.

Other songs from the album have made it on to YouTube, but the darkly political Fanatics and the sad, evocative Ghosts are absent as are some of the others. Don’t listen to this through nasty, teeny-weeny speakers on your phone or whatever though! Turn it up (and up!).

Headsticks are giving the album a soft launch; through their website (see below) and it’ll be out with them, no doubt, at some of the ace festivals and gigs they’ve got planned. Get out and hear them live and loud through some proper speakers. Find out that I’m right (about this at least) and buy the album.

Muster, published by Punch Music, is available here and as a download from iTunes.

All words by Rebecca Sowray.