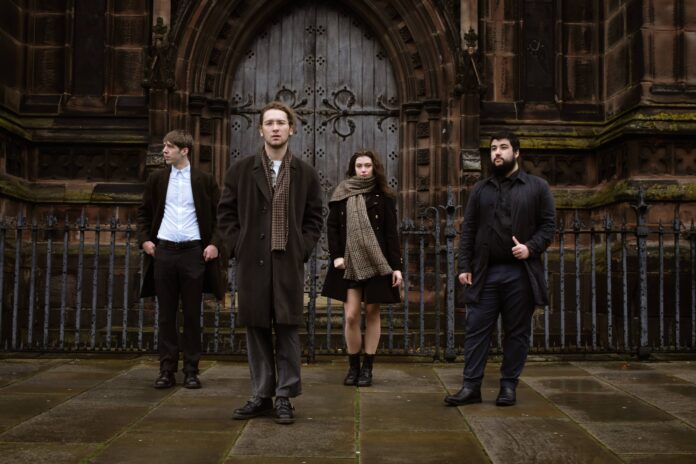 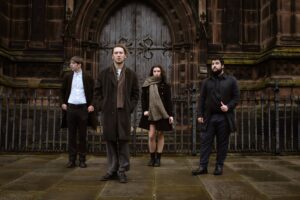 Headshrinkers’ Garran Hickman has been feeling lost. At the time of crafting Caught Between Two Stools, life to Hickman had become “like a dark blend of oil painting, finding it difficult to piece together and find any meaning.”

Things might not be going the way that Hickman intended, but his rage has produced some rollicking work. Caught Between the Stools continues Headshrinkers’ upward trajectory from sugar-spun jangle pop merchants to blistering bards.

Their first two singles – the anthemic Where She Plays and the swaggering Underclass – were irresistible postcards of swinging indie. However, their most recent cut, 6:41 Sapien, hinted at something darker, more mysterious – if before you could grab Headshrinkers’ sounds and let them wrap around you like a warm hug, 6:41 Sapien was spectral and wraithlike.

It continues with Caught Between Two Stools. It begins with a sizzling, twisting guitar and frenzied drums before being engulfed by a brooding blast of fuzz. “You find your voice when your choice is made,” Hickman purrs menacingly, his bull-seal baritone adding an extra cloak of menace. The chorus is as majestic as it is mercurial. Honeyed harmonies help add a little bit of sweetness, but this is music with sheer power – Hickman’s deep burr soars over pounding percussion and thunderous guitars.

By the time Caught Between Two Stools hits its bludgeoning, breakneck middle-eight – complete with some spoken word discontent from Hickman – you won’t be in two minds when it comes to Headshrinkers – you’ll be firmly in the ‘pro’ camp.