Home Blogs He Wasn’t Just The Fifth Member Of Joy Division: A Film About... 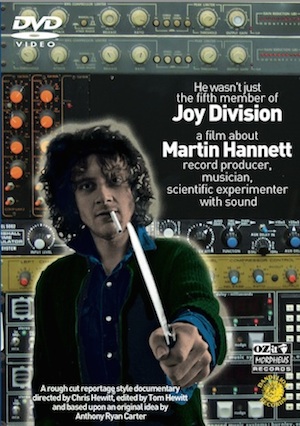 We gave this documentary a review back in January but as it’s released next week we thought it appropriate to run another by someone who knew Martin, Nicky Crewe.

Remember the scene in Twenty Four Hour Party People  where Martin Hannett is recording the wind on the moors above Manchester? Hold that image.Forget about slick BBC 4 Friday night music documentaries. Imagine a film that combines the qualities of a favourite bootleg album from the past with all the fading and phasing of sound quality that goes with a covert recording. Then think of a Grateful Dead concert, a performance outside of time and form, a psychedelic experience . Then imagine a film made about a man who was a sound alchemist, an inspired musician, a maverick, an enigma and a mystery.

Chris Hewitt’s  documentary is described as ‘a rough cut reportage style documentary directed by Chris Hewitt, edited by Tom Hewitt and based upon an original idea by Anthony Ryan Carter’.

There’s a cast of characters interviewed over many years. Ghosts of the past, visions of their younger selves. Tony Wilson, like Martin is no longer with us and yet it’s his interview with Martin for  Granada that is most revealing about Martin’s production process. The rest is myth and legend, and  equally fascinating. Old school friends, fellow musicians and Grateful Dead fans, business partners, collaborators and family all contribute to the portrayal of this mercurial and mischievous genius of sound.

Whether you knew Martin back in the day or came to know him by his work and reputation, there’s something for you in this tribute of a film. It’s an artefact in its own right. There’s a stream of consciousness, a spacey and  trippy quality to it, with its strange photo montages  and out take sound track. This is entirely in keeping with the man. You may find it rambling, incomprehensible and exhausting at times, but it’s worth persevering and it’s the closest you are ever going to get to understanding where he was coming from.

My own friendship with Martin started when I moved into a shared house in 1973 and ground to a halt a decade later with a drug related incident . What this documentary doesn’t do is explore why someone like Martin, with all his talent and vision, chose to go down the destructive drug and alcohol road when he was finding  success and recognition doing what he wanted with sound and music.

Last month’s launch of Chris Hewitt’s book, ‘ Martin Hannett: Pleasures of the Unknown’, took place at Gorilla on the 23rd anniversary of Martin’s death. Many of the people interviewed in this film were present. It was a wonderful evening and an opportunity to remember the man and his legacy. I can’t stop wondering what he would be doing now .

The DVD is released on May 5th by Ozit Morpheus Records.

All words by Nicky Crewe. More of Nicky’s writing for Louder Than War can be found in her author’s archive.