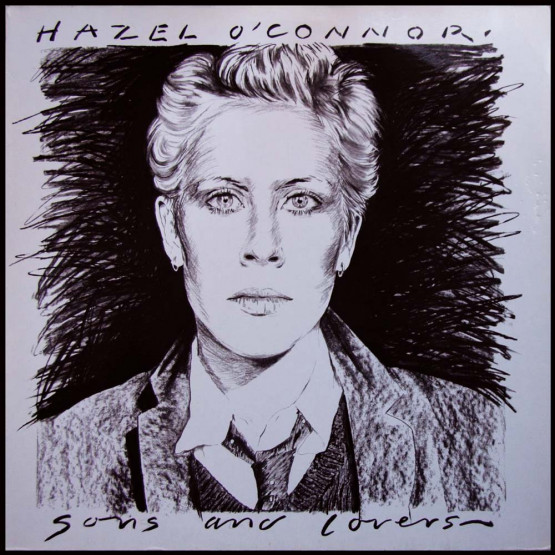 Reissue of Hazel O’Connor’s first non-soundtrack album, complete with bonus tracks coming from the associated singles of the time…..Ian Canty ponders the difficulty of moving from the silver screen into the world of Rock and Pop…..

In many ways Hazel O’Connor was in a tricky position after the success of her role in Breaking Glass. Thrust into the public eye seemingly from nowhere, the film made big news in 1980, granting her a great deal of attention as its star. As time passed, those that ate up Eighth Day et al were keen to find out what she would come up with next. But there was also the problem of the general public differentiating between “Kate” the film role and the real Hazel O’Connor, now trying to make her mark solely as a singer – some people wondered exactly how much of it was all still an act?

Sons And Lovers was her first step away from the film, but even whilst trying to make a clean break and find her own niche, Will You was released by A&M. It scaled the upper reaches of the UK chart and in doing so, queered the pitch of Hazel’s new album/direction somewhat. Casting off the role of “Kate from Breaking Glass” proved pretty difficult and gaining credibility as a musical artist was tough as well.

On the plus side D-Days, the lead single from Sons And Lovers, did do the business chart-wise in returning Haz to the UK Top Ten. This effort was a perky anti-poseur statement, complete with her trademark mannered vocal style, a good dose of energy and Punky/New Wave instrumental attack. A great deal of the parent album was in a similar mode, often coming on like a toy-town Stranglers (especially on the bonus track Time Is Free, the fun flipside of her 1979 debut single Ee-I-Adio).

The album missed out on the charts completely, a bit of a surprise given the hit single. Having Nigel Gray behinds the control desk (in a purple patch of his production career after worldwide success with the Police and also helming Siouxsie And The Banshees’ fine Kaleidoscope LP) and a five piece backing band called Megahype which included brother Neil on guitar, you would have thought the LP would have made at least some mark commercially. But despite all that this offering didn’t connect with the public in the way her previous record did and in truth it is a bit patchy.

I suppose part of the reason for the relative lack of success was that Sons And Lovers lacked the massive hype that came with Breaking Glass – but also the album seemed to fall between two stools. On one hand the urge to move away from her recent past, but on the other the music kept roughly the same format as Breaking Glass and she came over a bit melodramatic and actor-ish vocally. To be fair the character studies of the songs lent themselves to a theatrical interpretation, with the original press release for the record even mentioning that the LP had something of the revue about it. Again this was counter-productive to O’Connor establishing herself as a singer and not simply appearing as an actor having a dabble in music. This didn’t lend the stamp of authenticity that was perhaps needed for her at this point in her career.

The album did contain a fair dose of listenable New Wave Pop, the type of which was perhaps showing its age by the end of 1980, but still was enjoyable enough in small doses. Occasionally the vocal delivery and songs come over as a bit hectoring if you’re not in the mood for them, but for the most part the occasional heavy touch of the lyrics is offset by the bouncy musical accompaniment and all round brio. Too often it did seem Hazel was trying a little too hard and often appeared a little overwrought. O’Connor could write some interesting stuff in her songs, but it also must be noted that a few times there are more cringe-worthy efforts too.

A case in point is the title track, I know she was trying to make a worthy feminist point here, but at the time the likes of the Poison Girls were doing it better. It’s a little too clumsy. She actually has a much improved attempt herself on Gigolo, with the great and apt line “When you need, when you bleed, that man don’t care”. The tragic tale of Who Will Care? is affecting and it is odd to hear the old Irish standard weepie Danny Boy given a jolt into the New Wave. Zoo, the hackneyed simile to 9-5 working aside, is pretty lively as well.

Of the tracks included as a bonuses, the aforementioned Time Is Free is probably the standout. For people who like these kind of things, Hazel duets with a pre-fame Simon Le Bon on a live showing of Bowie’s Suffragette City (Duran Duran supported her on a 1980 UK tour) and the single version of D-Days joins a different, more electronic take overseen by DB’s producer Tony Visconti. For a Hazel O’Connor fan, this new reissue neatly ties everything together into one package.

Overall Sons And Lovers found O’Connor at a pivotal point in her career, struggling gamely to break free from the celluloid persona of Breaking Glass and assert her true self. Looking back now from the perspective of 2018, the album was decent enough in places, but not consistent enough. That it failed to chart shows that it didn’t win over naysayers, but Hazel, in true “old trooper” showbiz tradition, would keep on trying..