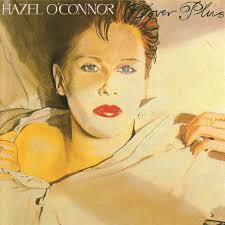 Extended reissue of O’Connor’s third album from 1981, with bonus tracks of associated singles and foreign language versions……LTW’s Ian Canty beholds what he has done………………

When this record was originally released Hazel O’Connor was still a “big name” on the back of her success over the previous couple of years. After some time spent travelling and acting, including the risible Girls Comes First, she had made her musical debut with the Ee-I-Adio single in 1979 (which was re-recorded for the Cover Plus album, with the original version being appended to this release). Her big break would come a year later when she won the lead role of Kate in the film Breaking Glass. Being one of the first “New Wave/Punk” movies (I think the Great Rock ‘n’ Roll Swindle and Rude Boy slightly predated it, but as they were X certificates and I was never going to pass for 18 even as a tallish kid of 13, they were out of the question). So I trooped along to the ABC in town to view it along with my mate Smithy. I must have thought I was resplendent in my Dead Kennedys t-shirt, not feeling at all incongruous. Oh the failings of my youth…..

Not having seen the picture since then all I can remember about it is a very greasy, un-Mod Phil Daniels as the band manager, some bloke lighting his farts at a gig and a typically melodramatic “rags to riches and then back to rags” plot that was enliven by O’Connor’s sparky performance. The film was a success and the soundtrack a big seller too, with a couple of singles from it Eighth Day and Will You making to top end of the charts. Though her first album proper Sons And Lovers didn’t meet with much successs, the punchy single D-Days did return her to the Top 10 (the b-side of that record Time Is Free is included here as a bonus, a little confusingly).

So it was with a cautious optimism (given the rapidly changing pop climate of the time), that O’Connor approached 1981 and the Cover Plus LP. Also a cause to rejoice was the fact that long-time Bowie producer Tony Visconti, who produced the Breaking Glass album, was back to oversee the LP and Hazel’s brother Neil (from New Wave/Punk combo the Flys, providers of the wonderful Love And A Molotov Cocktail single) was now part of her backing band Megahype.

Now I remember hearing this album when it came out and thinking it was pretty good, which piqued my interest and made me want to listen to it again. Though a long time has elapsed since the release of Cover Plus and a few of the production tricks sound more than a little dated, it still sounds ok. I wasn’t that mad on her recording of the Stranglers’ Hanging Around back then, but with the benefit of hindsight it is actually not that bad. I know hardcore fans of the Meninblack might baulk at this, but once past the Casio VLtone intro Hazel sings this one very well.

One of the things that strikes me listening to the album today is the overall sense of regret and despair in the lyrics. The parenthesis to title track itself We’re All Grown Up, ostensibly a true story about being discovered playing doctors and nurses also seems to hint at lost innocence, something which is born out by the words “but let the children play the way they feel they should”. This is echoed a bit on the retake of Ee-I-Adio, a much softer musicially version and played down a little lyrically too, but still a pretty dark song of domestic abuse. Not For You boasts possibly the best lyrics on the record, a realistic love song for once, not promising the earth.

After such a strong start the album does taper off a bit, but Dawn Chorus is a nice electro ballad and Animal Farm is at least an endearingly daft take on Orwell’s tome. Runaway, another semi-autobiographical effort focusses on O’Connor’ flight from home as a teenager and catches the mixed-up feelings and need for escape that goes through most minds after being freed from schooling. Three covers on an LP could point to a shortage of original material, but both Jim Webb’s Do What You Gotta Do and Lou Reed’s Men Of Good Fortune (from his Berlin masterwork) are given good readings.

The pride of place on the album’s second side is final song That’s Life (nothing to do with the Sham 69 LP/song), a fatalistic ode delivered by O’Connor in the style of Edith Piaf, well if she was a New Waver. A pretty satisfying end to a decent showing, with one of the bonus tracks fittingly being a French version, given the inspiration.

Moving onto the bonuses, b-side to D-Days’ Time Is Free is a touch more riffy and Punky, being recorded a year or so before the Cover Plus album. It’s good though and the flip to Cover Plus itself White Room is going in the opposite direction, more of the softer, folky stuff Hazel would move towards as the years went by. The three foreign language versions don’t add much, but are nice to have for a sense of completism. The 1979 version of Ee-I-Adio is a real asset (though I will grant you a little out of place chronologically). Tough New Wave with a winning mob chorus but very dark subject matter, a fine effort.

Cover Plus achieved a decent number 32 placing in the UK charts and although the two singles stopped short of the Top 40 this really represented her last chart hurrah. We also must bear in mind that at the time A&M was still releasing Breaking Glass material as singles to squeeze the maximum amount out of that record, which may have hampered Cover Plus and Hanging Around’s chart performance. Anyway from then on she seems to have opted for a lower profile musical career, returning more to acting and other projects. Although recording in a relaxed manner in the 36 years since this release, this album also marked a turning point away from commercial concerns.

Whilst by no means a great album, Cover Plus is a good one, one that is both interesting and occasionally baffling. O’Connor’s total conviction in what she is singing about makes things compelling, even when the subject mater is a bit daft (i.e. on the bonkers Animal Farm). Fans of Hazel’s music rate this one highly and will be pleased with the bonus material and detailed booklet notes. Newcomers might want to work from Breaking Glass forward, but though marked by a stereotypical early 80s sound, her personality shines through here and makes Cover Plus an enchanting listening experience.