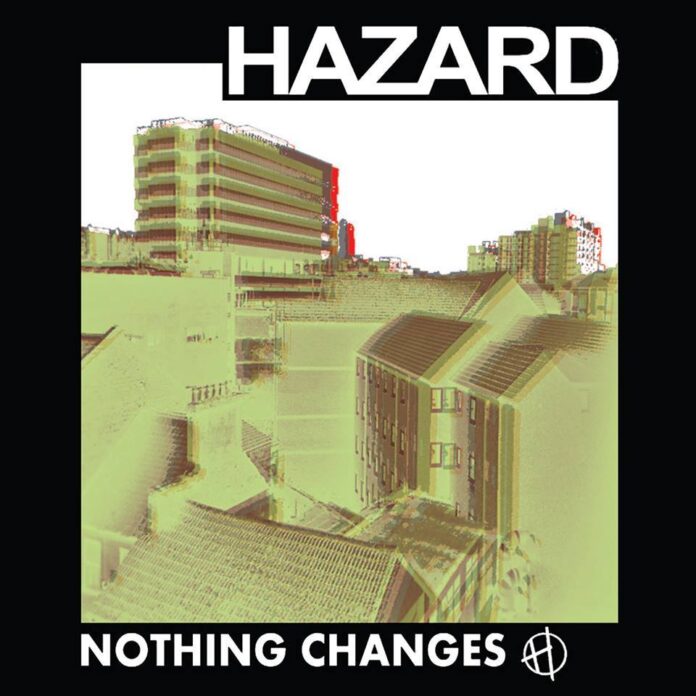 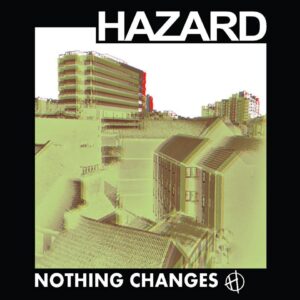 As far back as January 1977 it was said punk had died; the particular day being the 25th January when the Clash signed to CBS Records for £100,000. In 78’ SLF mocked this view when the line “punk is dead…but were still dying” was emblazoned across their ‘Alternative Ulster/78 Revolutions’ 7” single – fast forward some 36yrs, in particular to the town of Luton and you will be assaulted by the virulent rage of three snot nosed punks gathered under the Hazard moniker…none of them were even thought of by the time the mainstream press were hammering the final nail into the punk coffin, and therein lies the problem…for Hazard with their debut album have crafted a collection of songs that would have had the young punks of 77/78 squirming in their fake Boy bondage pants and should fire up those who continue to keep the faith, but we seem to have fallen into an abyss of apathy and confinement, confined by the glass ceiling of reverence for first generation or even worse ’82 era punk bands who had one half decent song and have traded off it ever since…

Opener ‘Destroy’ – a virulent 2min energised rage at the presumed norms of a consumer society, built around a rumbling bass line this motors along before climbing in ferocity as frontman Conner repeatedly hollers “Destroy, Destroy”, whilst ‘Freedom Fighters’ bursts forth, a cauldron of relentless energy delivered with no restraint, no afterthought and no care…

All the tracks are written by the band, and despite their age – collectively they are still younger than Charlie Harper, they show depth and understanding of song structure, ‘Perfect Mistake’ hammers along to a simple yet effective guitar solo breakdown with rabble rousing harmonies for good measure…’Redeploy’ is perhaps a little too close to the Subs for comfort, though ‘Wake Up’ shows their willingness to experiment with time changes, whilst ‘Police Oppression’ despite the clichéd title and nicking a line from Sonny Curtis ‘I Fought The Law’ sees a ska element very effectively introduced, this is taken to greater level when ‘Take Control’ ventures into a reggae tinged territory before ‘I Can’t’ returns us to the familiar vibrant punk rage. Album closer ‘Don’t Belong’ pending on your opinion either swipes a riff wholesale from Killing Joke, or sees Hazard pay just respect to their roots but then builds layer upon layer to craft their own song, its one of the slowest tracks on the album, and arguably one of the most effective; Connor seems able to partially restrain his anguished vocals – his delivery becoming clearer and arguably more effective. 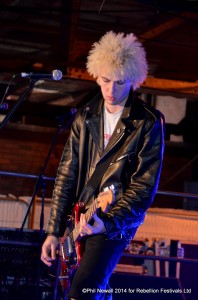 Lets not forget ‘Nothing Changes’ is the debut release from a young band, it isn’t perfect; frankly if it was I would be suspicious – this release captures Hazard as they are right now and as such it does exactly what it set out to do – the songs sound fierce and there’s some interesting guitar, Hazard make a big wall of sound, on occasion the vocals do get a tad too in your face, perhaps as in ‘Don’t Belong’ they should allow some of that sensitivity hidden underneath the cranked up noise to be exposed.

With luck, and contrary to its title ‘Nothing Changes’ will break through to those convinced that punk went no further than the cider swilling “have you got 10p” mob.