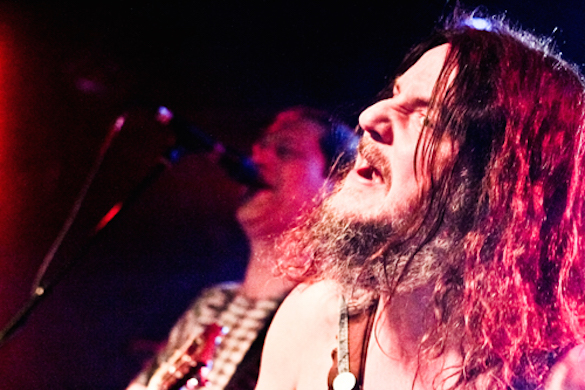 No irony here. Hayseed Dixie play it for real in Sheffield. idp reports.

On the way to the Leadmill I get lost in the Sheffield one way system and end up going round and round the block somewhere near the station. It’s a nuisance, but it does mean that I end up passing by a Victorian brick warehouse over whose doors is emblazoned the words Worldwide Robot Works. I know immediately that I have to find way of shoehorning it into my review of Hayseed Dixie.

Worldwide Robots is a nice monopoly to have. I imagine the works is a bit like the ACME factory where they made all the anti roadrunner devices, but better. Robots are the future, have been for years. Nobody chases roadrunners anymore. There are problems with the worldwide robot works concept though. We all know that robots come in two flavours – those devoted to good and those devoted to evil. If they are all made in the same factory safety precautions are required. Presumably there are armies of cyber-hygienists whose job it is to prevent cross-contamination.

Because there are some things that just shouldn’t be mixed. Good and evil. Grape and grain. Cross ply and radials on the same axle. Posh boys and guitars.

But there are other things that blend so surprisingly well so that even if you’re a touch apprehensive at first, but then when you’ve tried it you can’t understand why you didn’t think of it first because it just seems so right, Pernod and Guinness. Skateboards and empty swimming pools. Cats and the internet.

And of course bluegrass and rock music. Rockgrass if you prefer.

Tonight’s gig at The Leadmill is my first encounter with Hayseed Dixie live although I’ve been familiar with their recorded output since my friend went off to Donnington Park and when he came back all he talked about was a hillbilly band playing rock music. Man. Wow. Shake of the head. According to Wikipedia it was 2007 and Linkin Park, Motley Crue and Iron Maiden were there as well but all Gareth wanted to tell us about was Hayseed Dixie. 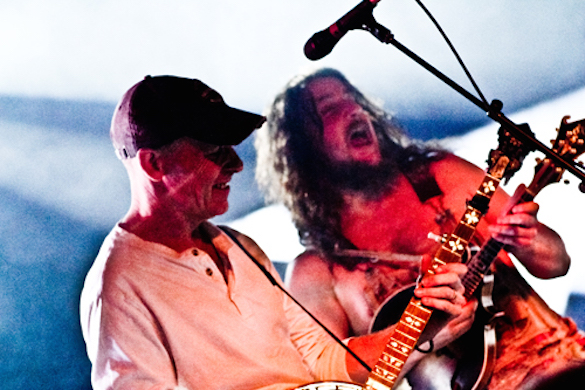 So I know they’re good, popular all over Europe as well as in the USA and with the release of their latest album they’re on a roll – even making the line up for Jools Holland’s show on New Year’s Eve but I’m still expecting an evening of dextrous irony, a pastiche show, something not entirely serious.

And I’m way off the mark because while the between songs chat is as funny and erudite as you could wish, (frontman John Wheeler says both epistemological and Hegelian in the same sentence in case anyone is reviewing the show and I’m careful to note them down and check the spelling) this is serious stuff. Not dull serious. Just not taking the piss serious.

The Leadmill is packed and from the opening of the set – two trademark AC/DC covers (Hell’s Bells and You Shook Me All Night Long) bookending the band’s own hymn of whisky and marijuana defiance Kirby Hill – it’s pretty clear that there’s going to be no quarter given or asked. The songs are played at a relentless breakneck pace on guitar, fiddle, banjo (newest band member Johnny Butten is the official world speed banjo record holder) and mandolin and in the hands of Hayseed Dixie many of them seem to take on a new personality, becoming songs they never knew they were. Much better songs than anyone could have guessed.

There are lots of covers of songs here that I don’t recognise – plenty of gaps in my rock knowledge – but Don’t Stop Believin’, Ace Of Spades and Black Sabbath’s Paranoid adapt particularly well to their new surroundings. Even Bohemian Rhapsody sounds just a little bit less fatuous although it should be noted that this is one of the few songs that the band do play for laughs. Even Mozart gets a look in with Eine Kleine Trinkemusic. A highlight of the set is Eye Of The Tiger from the new album Hair Down To My Grass. As with many of their other covers the song benefits from being stripped of some of its pomp and circumstance and just being played as a tune. Compared to the original the Hayseed version seems almost the more authentic of the two.

It’s not just covers however. The band also play several of their own songs including the remarkable Keepin’ Your Poop In A Jar and there’s not a dull moment in the whole set. The band have a high energy showmanship, loads of facial hair, much gurning, an occasional flash of nipple and plenty of posing with one foot on the monitors whipping the crowd up and pulling preposterous rock god poses all combined with a wildness that’s almost punky. In fact, if they remind me of anybody, as the band change positions and lean out into the crowd leering, it’s a country Gogol Bordello.

And they clearly like the UK. They’re remarkably well informed about the NHS (for a few polemical seconds there it could have been a Billy Bragg gig) and Jeremy Paxman and the similarities between us and the Germans although they seem to have fallen out with the Newcastle Apollo.

The set closes with a manic medley that includes Britney, Abba, The Bangles, Pink Floyd and many others all contained within an uproarious cover of Hotel California. It’s great stuff and haviing seen them live for myself I’ll be keeping an eye open for their return.

Hayseed Dixie’s website is here: hayseed-dixie.com. They are also on Facebook and John Wheeler tweets as @barleyscotch.