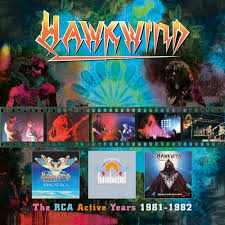 3 CD Boxset bringing together the three albums that Hawkwind recorded in the early 1980s for RCA….LTW’s Ian Canty sees what happened next to the band in their post-Calvert, pre-Indie years….

In between Hawkwind’s fine run of late 70s albums for Charisma Records (which you can read about here) and the three offerings that make up this box set, the band recorded the “Levitation” set for Hard Rock/Metal imprint Bronze in 1980. By that time they had lost singer and lyricist Robert Calvert, which was a major blow as he was such a large part of their style, success and appeal, but as a consolation (for this one record only) they had recruited the legendary and volatile Ginger Baker on drums. The LP even did pretty well and reached the top thirty of the album charts, getting to number 21 finally, this being their best showing since 1975. But even this didn’t lead to a longer deal with Bronze (who had their own financial troubles around that time which may have played a part) and they were soon on their way to RCA, who put the band on the roster of their Heavy Metal subsidiary Active.

Another round up of line up changes preceded their debut for RCA Active (with Baker being replaced by Hawklords drummer Martin Griffin), “Sonic Attack”. Times had changed and outside of the Hawkwind circle the “New Wave Of British Heavy Metal” outfits had made inroads into the band’s core support. Sensing perhaps some kindred spirits in the pursuits of noise and mayhem, Hawkwind cut their most “Metal” sounding album to date. But they could never cut a straight Heavy Metal record of course, choosing instead to incorporate elements of that sound into their already established Space Rock experimentation. This, added with them touring with some of that genre’s lesser lights in support, gave them a foothold in that market without them ever truly going down the Metal route.

Though now missing Calvert’s louche brilliance, Hawkwind could still be counted on to make a hell of an “out there” racket and “Sonic Attack” mostly hits the mark despite appearing rather disjointed. There seems to be a constant battle between being an almost standard 1980s Hard Rock act (well “standard” in the sense that ever could be applied to Hawkwind in any case) and the electronic strangeness they had a hand in founding and cultivating over the years. They could range from producing something that the early Human League could have turned out if they had used guitars a little, (on the title track in particular, which was developed from a Michael Moorcock spoken word piece that featured on “Space Ritual”. Moorcock also sang on the album and was almost a full time member of the band at this point in time) to more standard “pedal to the metal” rocker songs, like “Living On A Knife Edge” (which sounded to me like an anti-Thatcher rant) and the single “Angels Of Death”. But even that had a long moody middle section, which set it apart from the studs and hell for leather vanguard. In addition, they could always knock out a rip roaring tune, as the sublime “Rocky Paths” proved.

“Sonic Attack” even continued the upward curve in the charts – highest placing being number 19 this time, back in the top twenty for the first time since their early 70s halcyon days. After this return to the higher reaches of the nationals with an LP which updated their original sound for the Metal fans, what was next for the band? Well to cut the most un-Hawkwind-like Hawkwind album ever, if course!

In keeping with the fact this record would be a big break with their recent past, for this album they went under the extended moniker of “The Church Of Hawkwind” (which was the album’s title as well). Dave Brock had long been an admirer of the German avant-garde music scene that was thriving concurrently to his own band’s development and this record delves deep into the electronic side of those bands as an inspiration more overtly than anything else set down under the (sort of) Hawkwind name. After the oddly processed spoken word conversation with electro swirls that is “Angel Voice”, there’s an unmistakable touch of Neu! in the beat of “Nuclear Drive”. This track has more of the recognisable sound of the band about it, but really it is only this one and “Looking Into The Future” that has too much of the Hawkwind of old about it. They’re great numbers, but they’re dominated by synthesised doodling, the storyline (which surprisingly, given their generally doom-laden mindset of the era, seems to be an optimistic tale even though it is about religion, UFOs and nuclear destruction) and man-machine weirdness. And I love it all the more for that.

From the more conventional (relatively speaking) “Nuclear Drive” we work our way through more robotic dialogue/mood pieces in “Star Cannibal”, “The Phenomenon Of Luminosity” and “Fall Of City Earth” , before we meet the gentle, lovely doodling of “The Church”. That was it for the first side of the original LP and side two commenced with “The Joker At The Gate” which could easily have come off Cluster’s “Zuckerzeit” album, all bouncing synths and bleeps. More storyline/instrumental pieces follow, with “Some People Never Die” featuring, for some reason, reportage from Lee Harvey Oswald’s murder by Jack Ruby. Then there are the quick shifts of pace in “Experiment With Destiny” and another real beauty in “The Last Messiah”, which has a touch of Harmonia about it. Really this album is a gem right through to the strangely hopeful, quite touching climax at the end of “Looking To The Future”….it is in the same spirit as La Dusseldorf circa “Viva” album for me, having the same sort of wide-eyed, innocent beauty about it. The German influence is clear for all to see but Brock and his amigos work it into something unique.

When you consider that 1982 was probably the high water mark for Electropop, we can see with “Church Of” the perplexing situation of band like Hawkwind, seen as so unhip at the time, sounding not too far removed from the zeitgeist of the day. Some of the tracks would have very much worked at the time in a pop context, but they are just so out and out weird as well. Which we should be thankful for, for it wouldn’t be Hawkwind without them. Though toting a new platter that in truth was not a million miles away from the sounds being knocked out all over the country by sensitive fellas with wedge haircuts and synthesisers, to the praise of the NME et al, I have a vague memory that this didn’t get a very favourable reaction critically or with the fans and this may explain what followed.

With the final album of the set, “Choose Your Masques”, they were back without the “Church Of” prefix and straight into a title track that crams more “classic” Hawkwind sound into its running time that the entirety of the previous LP. Unfortunately this is probably the least impressive set on show here for me – a lumpy, unnecessary remake of “Silver Machine” is probably the nadir, perhaps a sop for the fans baffled by the “Church Of Hawkwind” concept? But there are some good things going on too. The bleak urban Motorik of “Void City” could almost have been John Foxx during his early solo period and the similarly themed “Solitary Mind Games” is as close as they would get to a ballad, with some screaming “Rock” guitar added. The Robert Calvert co-write “Farenheit 451” is a good one as you might expect, fast and full of fire. Though not a bad record, the ecology themed “Choose Your Masques” seemed to represent a bit of a backwards step.

This box follows on from “The Charisma Years” and while it doesn’t quite match up to that collection (which I found exceptional) this is still more than worthwhile of your attention, with “Church Of Hawkwind” being the star turn, a wonderful curve ball out of nowhere. Though it may have seemed to the untutored eye that Hawkwind were floundering in the Post Punk/New Pop years of 81/82, in fact they were pin-sharp and driven by the need to evolve in the way that seemed natural to them, at least up until “Choose Your Masques” anyway. Though seen as an institution by this point, they were nowhere near as fixed and staid as that statement might lead you to believe, retaining a playfulness and flexibility that belied their years and this is a joy to behold.

NB These are “Vanilla” reissues – that means there are no bonus tracks to speak of, you are just getting the albums as they were originally released. They sound great, they’ve got a poster with info and a nice clamshell box and have been clearly put together with love and attention, but that’s it. If you have previously purchased these albums, it is your decision whether you want the same thing again to replace your worn out vinyl versions. If you’re an intrigued newcomer, this along with “The Charisma Years” will give you a great insight into the many twists and turns of Hawkwind from the years 1976-82