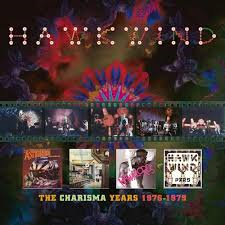 Boxset featuring all four albums recorded for Tony Stratton-Smith’s legendary Charisma label at the tail-end of the 70s by Dave Brock’s Space Rock juggernaut….Ian Canty decides to trust a hippy, discovers just how much they had to do with Punk Rock in the first place and why this period instead of a disaster zone was in fact more halcyon days for a band who many thought were past their sell-by date at the time……

Though glorious hindsight has now revealed to one and all that far from being the old farts that Punk set out to destroy, Hawkwind (along with their Notting Hill brethren the Pink Fairies) actually set the template for the sound of 1976 with their “couldn’t give a toss, let’s take it to the streets” mind-set and rough and ready approach. What hasn’t been acknowledged is that far from being welcomed in alongside the New Wave as founding fathers, they too were more or less cast out and regarded as the ultimate in unhip, like Genesis without the hits, just another bunch of Hippies that it was okay for “hip, young gunslingers” to poke fun at. When the four albums that are brought together in this set were originally released, outside of their solid fan-base these records and the band itself was mostly met with derision or at best disinterest. I seem to remember them being frequently bashed in the music press which is odd, because arguably they made a lot of their best records during the three year period documented here.

This new boxset has no bonus tracks, just the original albums as they were released at the time (a little unnecessary fiddling that occurred with the Virgin Records reissues about ten years back has been corrected), as they were meant to be. I’ve always found bonus tracks to be occasionally problematic in that sometimes they can detract from the record they are meant to be enhancing, tainting memories and/or skewing perspective. On other occasions of course they can be a joy and add to the experience, but it can be a double-edged sword. Anyway I’m more than comfortable to be able to hear these LPs in their original format, which are presented in reproduction mini-sleeves and are accompanied in their sturdy outer box by a poster (though a small criticism would be that a little further information on the recording process and some input from the band about it would have been nice). It is a handsome looking presentation and the albums themselves all sound good and clear. So lets dive in for some “Astounding Sounds” and “Amazing Music”.

Which of course is the name of the first LP featured here, released in 1976 when the Punk revolution was just starting to show its hand. Hawkwind, of course, hurtled on without a care in the world, but were noting which way the winds of change were blowing. Seven long tracks which incorporated Eastern influences and a tad of Motorik into their patented Rock N Roll attack with added synth squiggles and of course showcasing Nik Turner’s amazing, alternately parping and floating saxophone. There are clear signposts to the next record’s late-Glam Pop magic with “Kerb Crawler” and the merest impression of Sparks concealed just beneath the surface on “Steppenwolf”. “City Of Lagoons” is a fine bit of what I suppose people call nowadays “Chill-Out” but seeing as Hawkwind themselves more or less invented that kind of thing (I suppose something a little more relaxing was called for after indulging in a spate of their more gung-ho numbers), if they wanted to call it Space Rock well that is fine by me.

Now I’m going to surrender any hope of impartiality right here: I love “Quark, Strangeness and Charm” and for me it is the best record Hawkwind ever put down on vinyl. It’s Robert Calvert’s finest half hour (and a bit), he is on cracking form all the way through. Nik Turner had by this time departed, but honestly his absence was barely noticeable as the ‘Wind moved away from their spacier rambling towards something I would term very literate “Alien Power Pop” (“Damnation Alley” is a bona-fide classic which fits that epithet to a tee, with lovely electronic swirls dotting around the edges of the kller tune right up to the extended instrumental come-down). All the way through it is a scream lyrically, compulsive listening and as catchy as hell. The title track itself with a hint of the relaxed glamour of Roxy Music at their best is a total joy, a nod to Neu! comes in the form of “The Forge Of Vulcan” and the oddball Pop of “The Days Of The Underground” combines with a thoughtful look back at their early days in the lyric. This album is a total smasher.

Moving onto the next one in the release schedule “25 Years On” (though “PXR 5” was in fact recorded earlier), Hawkwind switched tack and renamed themselves the Hawklords, possibly in an attempt to distance themselves with their past (and I think there were some legal shenanigans going on too). This record was the first Hawkwind-related one I ever clapped eyes on and not knowing anything much about the band at the time I speculated long and hard in Abbey Music (my local record shop) whether this was actually a Punk/New Wave act I should be picking up, due mainly to the Graffiti-style font used on the front sleeve and the cubist shapes on the rear (designed by long-time Hawkwind cohort the brilliant Barney Bubbles, who was having massive success at the time with his excellent graphic designs for Stiff and other New Wavers). Unfortunately I never took the chance, because it is another high quality record and Calvert is again flying here, on top form both vocally and lyrically.

Though they had clearly streamlined the approach for the modern times hints of their old Prog glory remain on the fatalistic “(Only) The Dead Dreams of the Cold War Kid” and “The Only Ones” but elsewhere we get an inkling how Eddie and the Hot Rods would have sounded with synths and a Sci Fi fixation on “PSI Power”. The single “25 Years” is blessed with a strange though alluring chorus (in a parallel universe this one would have seen Brock and Co rubbing shoulders with Blondie, Abba and Elvis Costello in the charts) and “The Age Of The Micro Men” is an elegant piece of futuristic pop way ahead of the coming Electro chancers, it could almost be an Ultravox! tune of the same vintage.

Recorded at the start of 1978, for some reason “PXR 5” didn’t get a released until over a year later, possibly because it was a part studio/part live hotchpotch or even perhaps first coming into existence as a mooted Dave Brock solo outing. Filled with a fair few literally references (“High Rise” entitled after the J.G. Ballard novel of the same name and “Robot” receiving some input from Isaac Asimov’s similarly themed potboiler) it was sadly Calvert’s swansong with the band. Sad because he really was a pivotal figure over these three testing years and had helped the band thrive, on an artistic level at least, when they most needed it. Although his solo work was intriguing and often very good indeed I don’t think he ever quite surpassed his output during this era with Hawkwind.

Getting off to a very tough and Punky start with “Death Trap” and the curiously Who-sounding “Jack Of The Shadows”, “PXR 5” is perhaps the most straightforwardly Rockin’ of the four on offer here. “Robot” is a bleak look at commuter life which could be a little hard going in the wrong hands and if it were not married to a great coasting, theatrical pop tune with some nice fairground style keyboards. “Uncle Sam’s On Mars” continues the paranoia, a Space Race/Cold War piece that hurtles downward toward the destruction of mankind in the pursuit of one-upmanship, which pretty much how it is going still today. “High Rise”, a slow, sad treatise on encroaching human alienation is slow, almost a ballad with Calvert emoting about “a flypaper stuck with human life”, proving how well he could conjure an image in just a few words. Fittingly the relentlessly driving title track is like an update of their calling card “Silver Machine” (bar a few slower interludes) and a wonderful way to bring this set to a close.

Robert Calvert left the band after this record and as mentioned above it was a shame because they worked so well together, as is clearly evident here. Hawkwind of course space-rocked on convincingly right on to the present day, but perhaps things weren’t ever quite the same again.

So there you have it – four excellent albums from what at first appearance may have looked at a troublesome time in the band’s history, but was in fact a time of great creativity for them. Though these are “vanilla” reissues (meaning unadorned with extra tracks in the modern parlance) there’s plenty of flavour and taste to get your teeth into, because Hawkwind were pretty much fantastic around this time period. Not one to miss if you don’t already possess these platters, you need to hear these great records now.