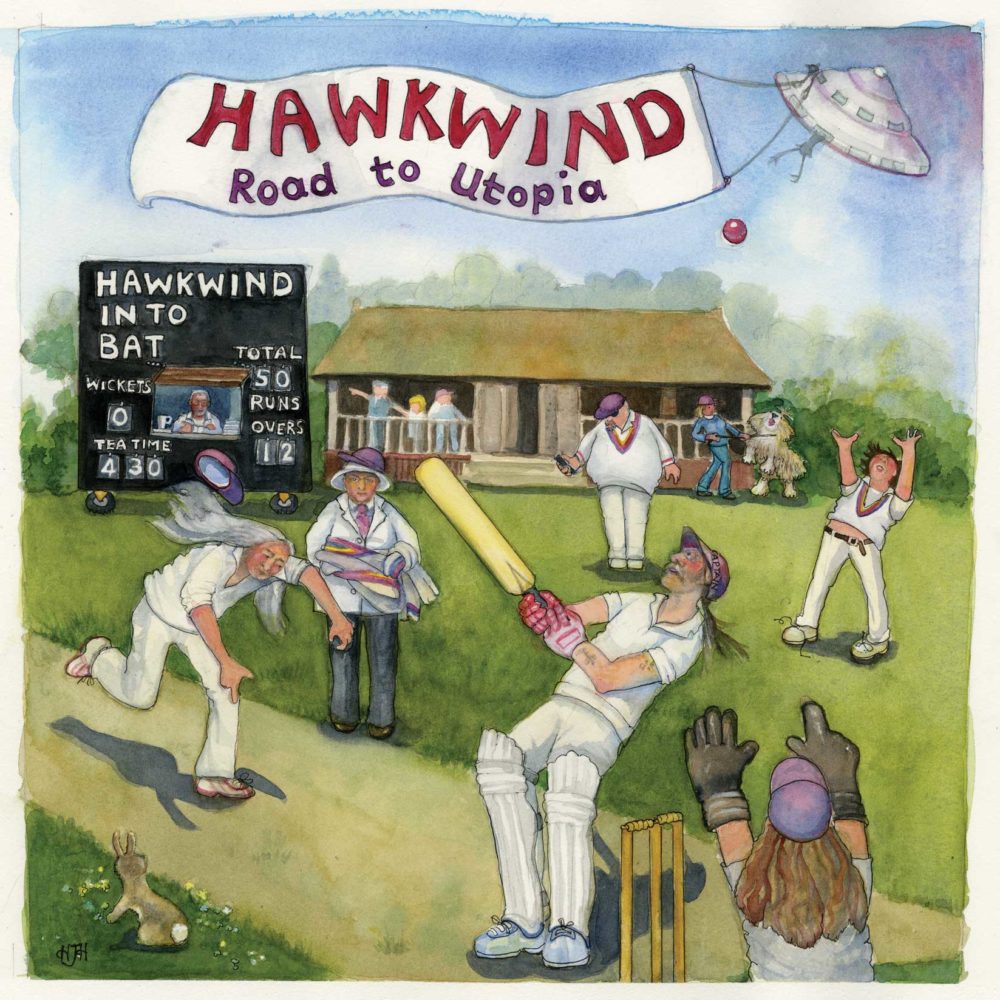 Album #31 for Hawkwind. With so many years, gigs and albums (and former members) under the belt, how do you keep things fresh and  interesting. Find out here:

And when you’ve spaced rocked round the universe and back again a few times and turned things up to ten more times than you’ve had hot dinners, in the words of Nigel Tufnell, where have you got left to go?

Dave Brock’s chance meeting with songwriter and conductor Mike Batt at the US Embassy (applying for Visas apparently) sparked off an idea. Hence the cricket themed cover (bat/Batt?). With Hawkwind in the process of prepping an acoustic album, tangents were followed, the result of which was for Batt to lend a hand and  create orchestral arrangements of some of their back catalogue. Typically, Brock and his crew were “delightfully free spirited” in giving him  free rein, so alongside the current Hawkwind line up comes a string quintet, a sax quintet and brass section. “Reinventing the familiar,” Brock has called it; something that’s part and parcel of the spec for the heritage acts these days and I guess for Hawkwind in general.

Yes, the track listing might be familiar but not arranged in this guise before. Within seconds of the familiar chug of Quark, Strangeness and Charm, there’s a mariachi blast that gives a clue as to the direction that we’re taking on this trip.  Even Eric Clapton gets involved with some lead lines alongside Brock’s harp and the Batt piano, pounding out a quirky samba groove on The Watcher to the extent you’re almost mouthing “black jack, do it again” Steely Dan style. “I gave you chance to do the right thing” indeed! And so it goes on.

We Took The Wrong Step Years Ago and Hymn To The Sun are rooted in acoustic arrangements; the former strangely  touching with a more sensitive string arrangement and an example of a more typical band + orchestra arrangement but one that really works, adding a pastoral flavour and possibly the album highlight. The  pacier acoustic drive of Psychic Power on the other hand, gets the a suitably uptempo brass treatment sending it into a disco soul area.

The pairing of the Age Of The Micro Man and Into The Night also add an atmospheric nd reflective calm with their orchestral embellishments but it’s left to Down Through The Night to remind us all why we’re here and follow a cabaret show section by re-establishing the space rock credentials.

The tour,  In search of Utopia – and beyond, that sees Hawkwind plus orchestra kicks off in October. Well worth a dabble.

Listen to Quark, Strangeness & Charm in its 1977 original arrangement  here: