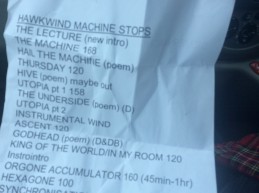 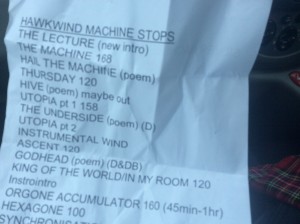 Like the finest of fine wines Hawkwind have been honing this thing down for ever.

Tonight they are reaching a new perfection- arguably a second golden age of Hawkwind – a new kind of 21st century perfection of their unique soup of psychedelia, drone rock and a tripped out, sonic hypnosis. Of course this a band with many great moments over a decades long career but sometimes it feels like the music and the stars are lined up right…

Watching Hawkwind is many things – one of them is a portal into a fascinating and unique early seventies madness, the lysergic period of hope and future/now dreams, a glimpse into the Notting Hill lunacy of a band that somehow existed in chaos and created beauty. It’s also like watching a band arrive at the right place at the right time. A time when rock music is full of drone and psych and weird as a new generation of bands break out of the constraints into the true progressive. This is a brave new world for some but a hone turf that Hawkwind have made their own and existed in for decades.A brave new world that their upcoming album, which was the backbone of tonight’s set, sounds like both the inspiration and the new marking point from and for and makes the band themselves sound like they are at the forefront of thrilling new wave of quark, strangeness and charm.

The second golden age of Hawkwind…

The set is mainly made up of songs from their upcoming The Machine Stops album which is based around EP Forster’s dystopian classic and sounds like a group at the peak of creative powers. The band have not sounded this good since their Space Ritual pomp as they take you into their own unique world.

Dave Brock may be the only original member left and the shadow of the dear departed Lemmy hangs over the proceedings but their most famous ex member would have felt a glow of pride that his former employers have somehow managed to be on the verge of something quite special after so long.

Everything is in place from the tripped out light show, the gymnastic dancers and the long hypnotic jams. The band are super tight and the shuffled line up sees frontman Dibs freed up from bass duties to concentrate on singing or intoning those Bob Calvert space junk poetry spiels.

The 2016 Hawkwind defy all expectations. They may have always been a shape shifting enterprise, Lemmy once remarked that he never knew who was going to turn up for any their gigs, but the idea and spirit of the band is bigger than its parts but when you get a like up like this then something quite special happens.

With most modern rock music moving in their direction with drone and trips music being the sound of the cutting edge it seems somehow fitting that Hawkwind are hitting a peak to claim their rightful crown. For too often sidelined by the hipster media who favored the German underground bands of the seventies it seems like Hawkwind were right all along.

The music they play tonight is mesmerizing. Their youthful new bassist is a great find and does all those great Lemmy style bass runs that were so key to the band’s Space Ritual era. He locks in tight with the drums to create that shape shifting and mind altering repetition that has always been so key to the band at their best. Some of the songs can stretch out for almost ten minutes but that never seems long enough.

The trick is they never stay in the same place for more than a split second – the riff is already mutating and the action on top is breaking it down. There are a couple of synths/laptops/keys reminding you that the band were also pioneers of electronic music – all hail form Hawkwind legend Dik Mik and his sonic boom keyboard bubbles – a pioneering role that also they receive far too little credit for and then on top of that is Dibs confident and masterly vocal that sees the singer take the band by the scruff of its neck and really make something of it instead of coasting along on an easy cult number.

2016 Hawkwind sound like a band going somewhere. In a hurry.

And then in the middle of this creative flux is the enigma that is Dave Brock. At 74 he still looks the arch Druid of counter culture, the drooping moustache, the long hair unchanged and that churning rhyming rhythm guitar that is the true heart and soul of this operation. His grinding guitar parts are the pulse beat and his backing vocals the colours of the sound – when his voice comes in on a phrase you instantly get that Hawkwind moment defined.

For a set that is new song heavy and has rare moments of old material like The Watcher or a pulsating Orgone Acculamator this is a very well received playlist from a band that is still pushing the boundaries.

A truly triumphant set from a band with unfinished business. Hawkwind sound like they are just starting….