Our team including: World famous, Queen of the para-normal, Kadrolsha Ona Carole, TV/iHeart Radio stars, Jimmy Star and Ron Russell, ( hosts of the Jimmy Star Show ), recording artist Ricky Rebel, journalist, Terri Harlow, and myself, set out to explore the Dungeons beneath the morgue of the Kings Park Psychiatric Center, Kings Park, New York . Once an Asylum for the of the mentally-ill and the criminally insane, now just a distressed venue for the souls and spirits still roaming the toured rooms where electro- shock therapy, and lobotomies, were regularly performed.

Our troupe of Scooby-Doo  novices, with the exception of  Kadrolsha, climbed through a shattered glass window, after being blessed by Vatican holy water, and protected by an aura of light, hoping not to get caught by the police. The immediate stench of mold and asbestos permeated the cement ravished, desecrated room, leading to violated staircase, with its rusty hand rails. We  cautiously walked down the missing steps leading to a pitch black basement, and it suddenly became cold, very cold. We passed a huge hole in one of the walls, that Ron of course, dubbed “the glory hole”.

Abruptly we found ourselves amidst the peeling tiled walls of the surgically experimental confines of the lobotomy chamber, filled with the haunts of those who remained, still tormented, afflicted, and filled with too much agony to cross over. It was there and in a true to life torture labyrinth, laced with metal wrist restraints, hanging from the walls, and ceilings, that we all received a taste of the spirit world.

Myself, not particularly a believer in ghosts, however with an open mind, I was the first to use the divining rod, a technique used in the investigation of spirits, with the belief that the rods act as a conductor of heat energy sources. The spirits that reside with in these feilds draw upon the energy to manifest themselves. Well wouldn’t you know it, they began to move, beyond my control. They moved for each of us who had the courage to try. We then heard the moans of the spirits through a recording device, including hearing the name Jimmy Star, as clear as a bell. 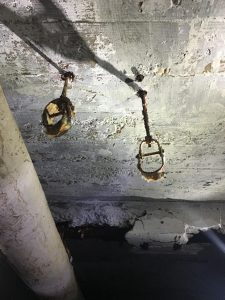 Then without warning, Kadrolsha was suddenly marked with 2 pronounced, scratched, raised crosses on her neck, which became bigger and clearer as the moments passed. Next a candle was lit, and the flames responded by growing higher and lower, and then flickered as a response from the apparitions.

Then just as instantaneously as their presence appeared, it was gone. The rooms became warmer, the attitude became lighter, and the mystery vanished. However as I left the premises, I had to wonder: were the manacles, the iron gauntlets hanging from the walls and ceilings, actually used on the wrists of  human beginnings as a form of restraint?  I thought of all the patients that received lobotomies, a neurosurgical operation that involved severing connections in the brain’s prefrontal lobe, used to treat schizophrenia, manic depression, and bipolar disorder. Then I thought of all the electroshock therapy that was also used on patients to alter the brain chemistry and alleviate certain symptoms of mental illnesses. The thought of these procedures seemed more haunting to me than the ghosts who still walked about the caverns and wards of the facility.

Kings Park Psychiatric Center, formally called, the Kings County Asylum, operated from 1885 until 1996, with 100 buildings on the grounds.

Jimmy: This is Jimmy Star from the Jimmy Star show with Ron Russell, and I’m here with Kadrolsha, Queen of the para-normal, and we are getting ready to go into the Kings Park Psychiatric Center.

Kadrolsha: We are going to protect ourselves before we even leave to make sure nothing attaches itself to us. I have some holy water from the Vatican, then we’re going to go in there to see if we can actually feel the energy from the past. I’m going to teach you what it feels like if it comes against your skin. I brought an EMF meter, which is an electronic field meter, to look for energy in the area. Another thing we’re going to be doing is EVP, which is an electronic voice phenomenon, which is a tape recorder used to talk to the dead. I created the instant EVP, were you ask a series of questions and you instantly play it back. We’re going to try to heal some spirits, because I like to do healings, because the building we are going to be in was the original morgue from 1923. They did lobotomies, and minor operations in this particular building.

We are going into a facility were people were disturbed.

K: And criminally insane as well.

Will the ghosts be irrational, or criminally insane still?

K: I have a couple of theories on this. I think if you were born that way and you got worse, you’re probably going to stay that way. However let’s say you have a psychosis that develops in time. I believe that when you do pass away your spirit becomes more of what it was before you became ill.

So there might be some dangerous ghosts to greet us?

K: That’s why we bless ourselves before we go. The chances of coming across something that is negative is rare, but I’m not going to say that it’s not going to happen. Hopefully will get some evidence, but you have to realize they don’t just come out and say boo. This is real true paranormal, not TV paranormal.

Ricky, you have a question?

Ricky: I’m really nervous about a spirit coming home with me.

K: We are going to take care of that before we even get there. I’m going to do a blessing, and encase you and a beautiful white light, which is in- penetrable.

K: We are going to use divining rods to detect energy. If the spirits come forward they will possible move the rods.

Suddenly the rods moved. I was holding them and had no control over their movement.

K: She’s got a hit. Are you moving these?

Rickey: OMG! Eileen are you doing that?

No, I’m not. That was the weirdest thing ever. It was very emotional.

K: (She handed the rods to Ricky) Ask them to come out….ask them again, it isn’t every day you call to the dead. Keep coaching.

Ricky: Spirits in this room, please close the rods.

K: How are you feeling?

Finally the rods closed. The same then happened to Ron, as Jimmy recorded it.

Ron: Did you hear that breathing?
Jimmy: I heard a moaning.

K: Again, it’s not finger nails. It’s just heat from energy. We are in an area were there was intense energy because you could feel the fluctuation. It was ice COD, so there was spirits there. We heard them on the EVP, got some funky photographs, and they reach out and touch you. It’s kind of a bully situation. They want to take out the one that can take them out first. So if they can go after me first, and I get scared then we all run out of the building. I am used to this, other people aren’t, and it does sting like a motherfucker.

Ricky: Can we go now?

K: Are they getting any bigger?

Ron: If they get any bigger, I’m going to faint.

Jimmy: She means her scratches, not her breasts.

I can’t get over those crosses scratched on your neck. I just can’t move on. Kadrolsha, what is it that you do exactly. I’m sure you don’t spend your life in abandoned mental facilities. 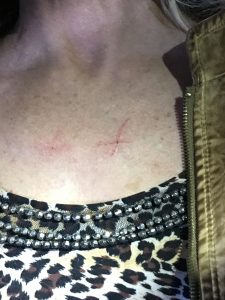 K: I like all aspects of the paranormal. I’d like to bring closure to people, like contacting their relatives, animals. I do actually heal people. I can heal them if they are to be healed. Richard Griffin Junior was 6 years in a wheelchair, and he’s up and standing now. Many, many cases like this of animals at death’s door, get up and walk away when I’m done with them. I love the healing aspect. I love the spirituality of coming in and investigating the unknown, and showing people that it’s not like TV. This is really happening here with us.