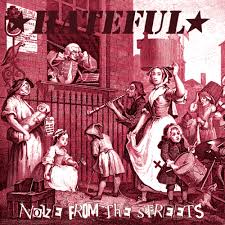 Hateful: Noize From The Streets

Do not be in any way fooled by the title. This is not any old cliched street-punk type album. From the front cover artwork which is a painting called The Enraged Musician by William Hogarth from 1741, to the bookends of pop-smart instrumentals (Eingang and Ausgang) opening and closing the album, this has depth and class from beginning to end. There are not many punk rock groups comfortable with strings, keys and acoustic guitars embellishing their records but Hateful pull it off tastefully and with aplomb.

Hateful have been around a fair old while. Songwriter and frontman Alex King and drummer Kev Mac (who was in Oi Polloi for a time) have played with each other in bands for years. Bass man Mekon was at various times a Revillo, a Cretin and is currently also in fellow Glasgow veterans Fire Exit. New boy Alex Aiken (who joined on guitar last year) was in Ex Cathedra, so there’s a fair bit of pedigree there.

Hateful are so much more than the sum of their parts, however. This is a punk album by definition but it’s so refreshing to hear a band of this ilk taking some chances and pushing themselves as well and as far as Hateful have done on “Noize”.

They’re great musicians; of that have no doubt. Kev’s snare cracks and precision fills are Topper Headon at his best. Mekon is one of the great punk bassists; his looping, pulsing basslines keep the songs momentum while adding a frisson of an almost jazz feel. The two Alex’s guitars chop and wind sinuously around each other with Aiken’s Mick Jones classicism adding a lovely melodic texture. King’s vocals are raw, rough and nicotine-stained. The band tell me he often brings the songs to them fully-formed with backing vocals and harmonies ready to go. That level of detail is immediately apparent.  The energy of the songs rarely lets up and at times there’s a real angst and pathos to the writing.

“Bulletproof” which is about fallen comrade Dougie McLean is, to all intents and purposes, a sizzling pop-punk tune (and should be the lead single if the band have any sense!) and is typical; underneath the fizzing pop and boisterous crackle of the song is a lyric that is world-weary, melancholic and wracked with emotion. It’s very much a fitting and elegiac tribute to their friend and former band-mate. The tongue-in-cheek fade out which is a nod to “Down In the Tube Station At Midnight” is a compelling touch.

The Art Of The State clocks in at an impressive eight-odd minutes. With time signature changes and a gently picked acoustic guitar opening it’s a world away from the typically glum cliches of punk rock in the 21st Century. Hateful have clearly taken influence from across the spectrum of music (Aiken is locally notorious as a bit of a 70’s prog fan as well as an original punk face!) and have deployed lots of clever twists and turns in the album. There’s elements of The Clash, bits of SLF, little touches of The Manics and a modicum of the boot-boy glam of Slade. “Let’s Go” cheekily lift the coda from Motorhead’s R.A.M.O.N.E.S in a tribute to the ever-lasting excellence of Da Brudders and the ska-infused “Caught In The Sound” is simply glorious. It lifts off into orbit about two minutes in, just as you think it’s reached the end, with a sizzling punkoid energy. It’s about (I think) gigs at the old Glasgow Apollo and lyrically captures the sweat, rush and pending violence of the old fleapit just about perfectly.

“Static” is a paean to listening to the much-missed John Peel (and in fact starts with a little sample of his voice) and others and again seems to just about capture that teenage speed-rush and excitement of finding something new that was yours and yours alone among the “static” of the boredom of daytime radio. The chants of “ten till midnight!”  throughout the track seethe and elevate at the same time. “Hit And Run Away” is a protest punk song with teeth and more than a hint of The Ruts in its DNA.

“Happy Now” features the aforementioned strings and acoustic which follow an a-capella verse from King. This is another almost-epic and shows the strength of this band in all of its songwriting power and prowess. The tone remains slightly reflective; that’s a theme in a few of the songs but it really suits the band and the album. It has the feel of some of Manic Street Preachers post-Richey albums in its almost-grandeur.  This is a truly unexpected turn from Hateful- they’ve taken the decision to expand their signature sound and it’s been unbelievably successful.

The title track of the album is more standard fare-three minutes of blistering punk rock. Lyrically, it seems to bemoan the state of music and the lack of risk-takers in the modern game. Thankfully, we’ve got old guys like these doing it for the young pretenders. Take a bow Hateful, you’ve made the album of your lives.