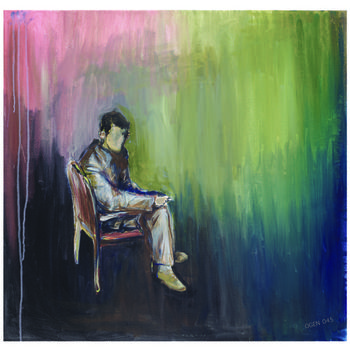 Label boss and long time supporter of Hatcham Social Tim Burgess says this, their third long player, is their best yet. Sarah Lay is inclined to agree.

These songs have been haunting the edges of my mind since I first heard them at Kendal Calling last summer. Stood in front of the stage that day was one of those unexpected moments of revelation where a band goes from good to great in the passage of one album.

That day was a sneak preview of what was to become this album, Cutting Up the Present Leaks Out the Future, and the fuller sound, the retro rock ‘n’ roll, the dark Americana made it one hell of a tantalizing glimpse. Since then I’ve survived on singles More Power to Live and Lion with a Lazer Gun, anticipation for the album gnawing at my musical appetites.

I’ve had those months to hone my anticipation, even if only on scraps until now. You’re going to need to invest some time in this record too. It won’t immediately grab you, although it’s noticeably a step on from the band’s previous releases, but rather you’ll want to spend some time allowing your ear to adjust to its dark corners so you can really take hold of all it wants to give.

Hatcham Social told me they wanted this album to sound like: “Summer all-nighters and dark melancholia, drug-addled dreams and mood-age rage.” And it does, it sounds like all of it thrown through the sharp relief of legislated nostalgia for birth of rock ‘n’ roll, the creation of teenage culture at the 1950s All American prom, drive-in movies under big skies, the jukebox at the diner.

But it starts by sedating you, ready to accept these memories you don’t actually have; Ketamine Queen provides a delicious slowing of the senses, syrupy synths pulling languidly on the limbs.

But once you’re under the shadowy world gathers close to you and if you’re willing to stick around, will reward you with heart-warming details emerging on each subsequent listen.

The retro rock ‘n’ roll vibe is strong throughout; that beautiful mix of country twang and blues warmth. Confessions of an English Opium Smoker is a racing hand-jive of a track; you can almost hear the clouds of petticoats rustling behind the flitting riff.

Mid album we get a triple run of tracks that even on first listen you begin to get a sense of the power this record holds.

Starting off with the swooning harmonies of Spirit of 45 before the volume riffs of More Power to Live, the first single released from the album. Drawling lead over a chugging rhythm and chanting backing vocals, a few shimmering ‘oohs’ to juxtapose with the great scuzzy swell of guitar. Simply a great track.

It’s followed up by Lion with a Lazer Gun, a hazy pop track with tripping military beats and psychedelic lyrics. It is refreshing to hear bass so high in the mix, so often relegated to supporting the percussion on this record Hatcham Social have made the instrument a star of the show, rightly so. It provides a far more balanced direction for the songs as the bass grumbles sensuously against the warm tremolo of guitar.

There’s still a lo-fi aesthetic throughout the album, a homespun charm as studio count-ins precede some tracks. But the songs themselves are polished gems amongst the shingle of lead ins and outs. Stay True to Your Family brings in an almost religious element, something of a modern carol about the refrain.

But the end comes abruptly, Don’t Go To Sleep breaking off in a sudden hiss and crackle like the sharp gasp for a first breath as you’re bought back to consciousness. The needle falls from this dark dream of a record leaving a slightly uncomfortable feeling that you’ve spent too long in Hatcham’s grasp, already longing for their next embrace.  It leaves a heady temptation to go straight back to the start and let Ketamine Queen put you under again.

When I spoke to the band last year for Louder Than War they told me: “These songs were not prepared or pre-ordered, they were born of a moment of four human beings locking themselves in a dark room up a mountain for two weeks with a reel of recording tape. The last album was our party album, our popsong moment, a dancing album; this album is us.”

So here we are, with the essence of Hatcham Social distilled into Cutting Up the Future… a long player of dark retro rock ‘n’ roll, slow burning brilliance.

Long time band supporter and O Genesis label boss Tim Burgess has said he thinks this is their best work yet. We’re inclined to agree; Cutting Up the Present…is the sound of a band in their prime, more than living up to their potential.

Catch them on tour later this month:

All words by Sarah Lay. Read more from her on her Louder Than War author profile or follow her on Twitter.