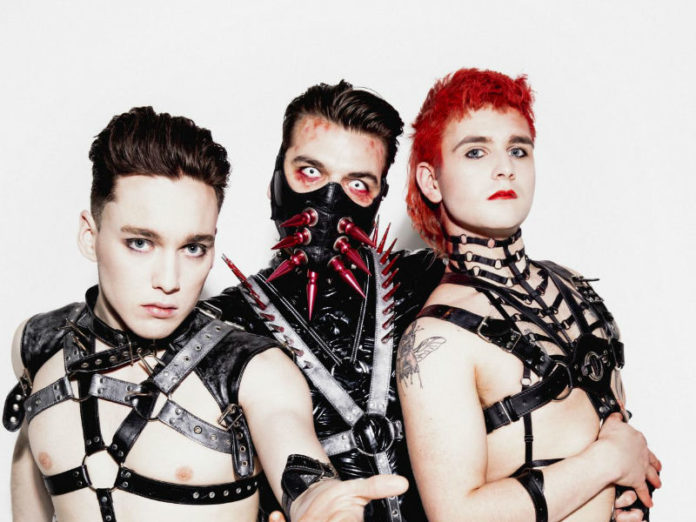 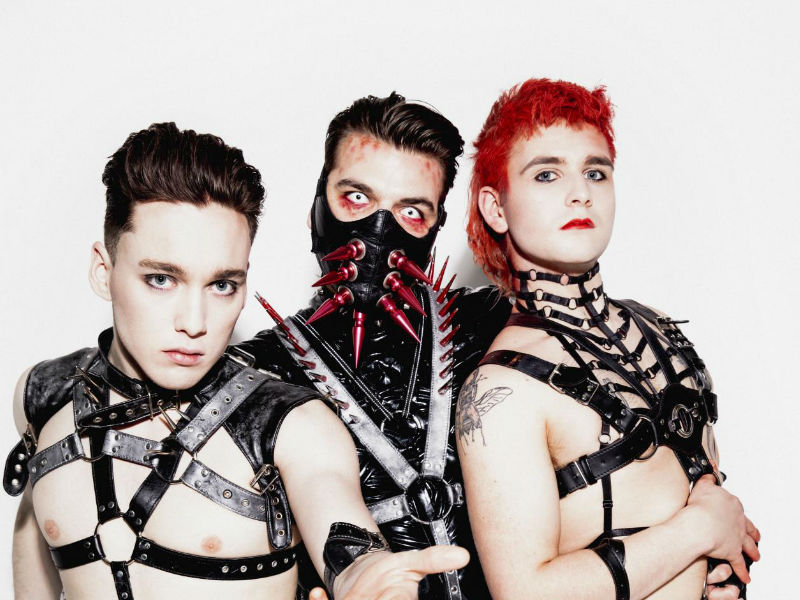 Station Narva is a key new festival in its second year. The event in Estonia’s third biggest city on the Russian border is an ambitious attempt to rejuvinate a broken city with music culture and art and it’s working and inspiring the Russian speaking city to a new future breaking from the narratives of the past. What better place to see the new leaders of perfect perv dark energy death disco pop – the industrial goth fused dark energy of Iceland’s Hatari says John Robb.

Hatari are a fantastic enigma.

Dealing a stomping industrial Goth sex beat surely they should have been consigned to eternal cult status this music usually consigns it’s practitioners to but they are now primed, locked and loaded for the mainstream. A packed house in Narva Estonia is on the verge of hysteria as the three piece dressed in the finest SM PVC and studs delivers a brilliant set of fully realised freak songs.

The Icelandic band, who are a multimedia performance group who brilliantly formed to topple capitalism in the fervent art revolution of Iceland are somehow managing to sneak heavy SM and BDSN dressed industrial techno into the mainstream are fast rising despite coming came 10th in this year’s Eurovision Song Contest. The annual show is usually a kiss of death for all manner of desperadoes and washed up X Factor wannabes that make up the camp and kitsch waste of time of the event. Somehow, through, Hatari used the programme to make a policy statement about the hosting Israeli government, sex and capitalism and have bounced themselves into a notoriety with their bizarre and brilliant revisiting of the industrial goth ghost dance of thirty years ago but cranked into a modern context. Finally, the annual wasted opportunity of the Euros, which normally concentrate on cheap laughs and cheap essential scenery with a frustrating, occasional intriguing morsel has hit pay dirt with potentially its biggest band since the fab ABBA.

Live the three piece own the stage. Dealing an intensity and dressed in SM and industrial goth studs and leather with buttocks and bare flesh hanging out in provocative heavy manners they are dark sex. Older audience members are reminded of the great post punk band, the Virgin Prunes with the  twin frontman assault Klemens Hannigan and Matthías Haraldsson (who is also a playwright who wrote a one-man show about mortality, the mass-production of furniture, Billy-shelves, repressed feelings, cute turtles, loneliness, practical spice-shelves, death, life, sorrow and more.) who deal in the same kind of moral teasing sex and boundary pushing  of the classic Dublin band of yore over a pulsating and stomping death disco and industrial jackboot stomp provided by the gimp mask wearing Einar Stefánsson

Of course it’s filthy. In all the best possible ways with the two frontmen are dealing in a sexually charged stage act that is a fantastic put on. Matthías Haraldsson  sings deep and distorted as he stares into the crowd with a ferocious and contentious glaze whilst Klemens Hannigan cuts in with a glorious falsetto that is full of melody and soaring pop melancholia.

Musically they can back all this up. Proving that they are way ahead of the curve and no mere Eurovision Song Contest plaything, this is the heavy sound of EBM and industrial goth fused into a 21st Century pop. The beats are pounding, Stefansson is stomping his electronic kit and slamming the 4 to the floor kick drum – this is classic dirty disco with electronic washes and grooves cranked to the dance floor max. Think Front 242, Revolting Cocks, Thrill Kill Cult, KMFDM and that whole host of pioneering industrial dance acts of the late eighties – the whole Waxtrax mob with their mixture of sex and darkness and bump and grind grooves and you are half way there with Hatari.

Not many people survive Eurovision. But Hatari have used it as a platform and staging post to an ascendancy that could see them as one of the biggest bands in Europe by the end of next year. They are primed for the Rammstein style crossover but with less reliance on guitars and rock than the German band. It’s packed in here tonight and the whole audience is bouncing off the digital ebb and flow of their songs,

It’s powerful, pounding stuff. The shuddering beats and deep textures are captivating. Whoever thought that industrial goth black heart techno, with its great history of dark madness would somehow be a new millennium pop music is a genius. Hatari are full of content and intense and the audience already adores them. There are screams and much dancing, some of the youths are even copying their style with studs and belts. You can see it all laid out in font of you – a band on the cusp of filthy madness and a wild run in the mainstream.