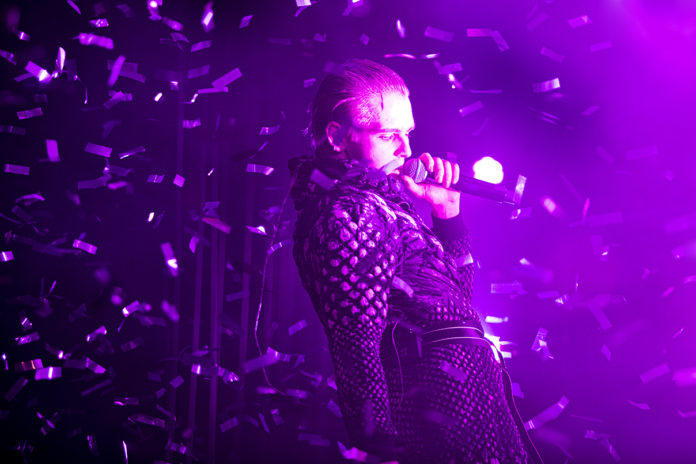 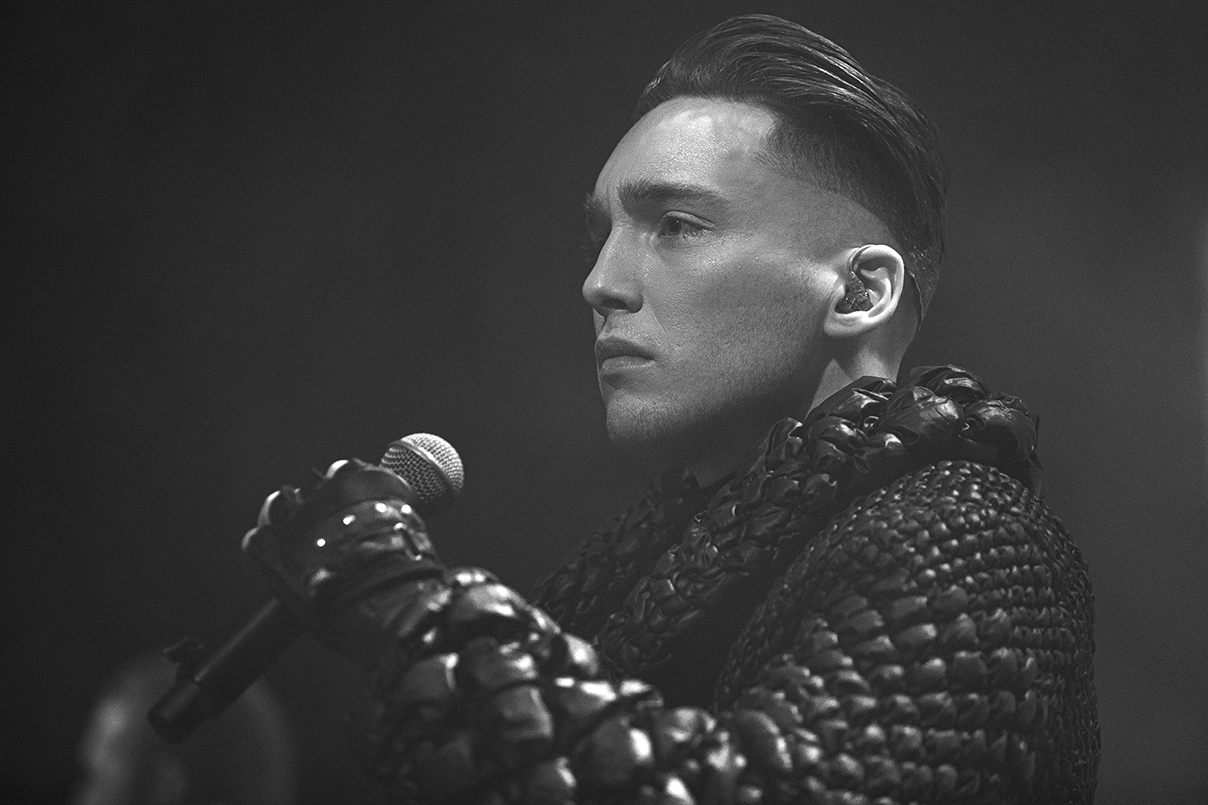 Since their debut in 2015, Icelandic techno-punk trio Hatari has gone through a series of transformations. The original band members Matthías Tryggvi Haraldsson, Klemens Hannigan and Einar Stéfansson gave up military costumes for BDSM straps and latex suits to make the anti-capitalist agenda more transparent. Before their storming appearance at the Eurovision last year, they had grown into a powerful live collective featuring a dance troupe and impressing the audience with their striking glamour. All these changes have not affected the band’s genuineness, nor lessened their rebellious spirit. Their Reykjavik show celebrating the release of the debut album Neyslutrans (“Consumption Trance”) says it all.

The release show on the home soil is taking place at Austurbær theatre, an example of concrete “funkis” (Nordic functional) architecture and a legendary music venue. It is known for hosting The Kinks when they did their first show in Iceland in 1965.

While doing a routine online search on Austurbær these days, one is likely to find posters promoting theatre productions for children as well as photos from corporate parties. Strangely, both dimensions can apply to the concept of Hatari’s live shows. Queuing before the hall’s entry, the audience looks primarily goth with some fans matching a preschool-age category. It would be logical to suggest that the warm-up set of 16-year-old Guðlaug Sóley Höskuldsdóttir aka Gugusar is their lot if those kids were not wearing branded Hatari T-shirts. The lobby is decorated with other relevant paraphernalia – banners and flags displaying gear wheel held in a hand – a symbol of Svikamylla ehf., the band’s record label.

The choice of theatre as the venue for the release show seems very natural. What they do on the stage is far beyond the boundaries of music. Mimicking the reality, they playfully present the model of dictatorship relying on archetypes of capitalism. The supreme leader-frontman performed by Matthías Tryggvi Haraldsson, a playwright in his day-to-day non-Hatari life, is theatrically raising hands, expecting the audience to salute and obey him. The other two characters are submissive slave-singer and ferociously silent executioner-drummer, played by Klemens Hannigan and Einar Stef respectively. 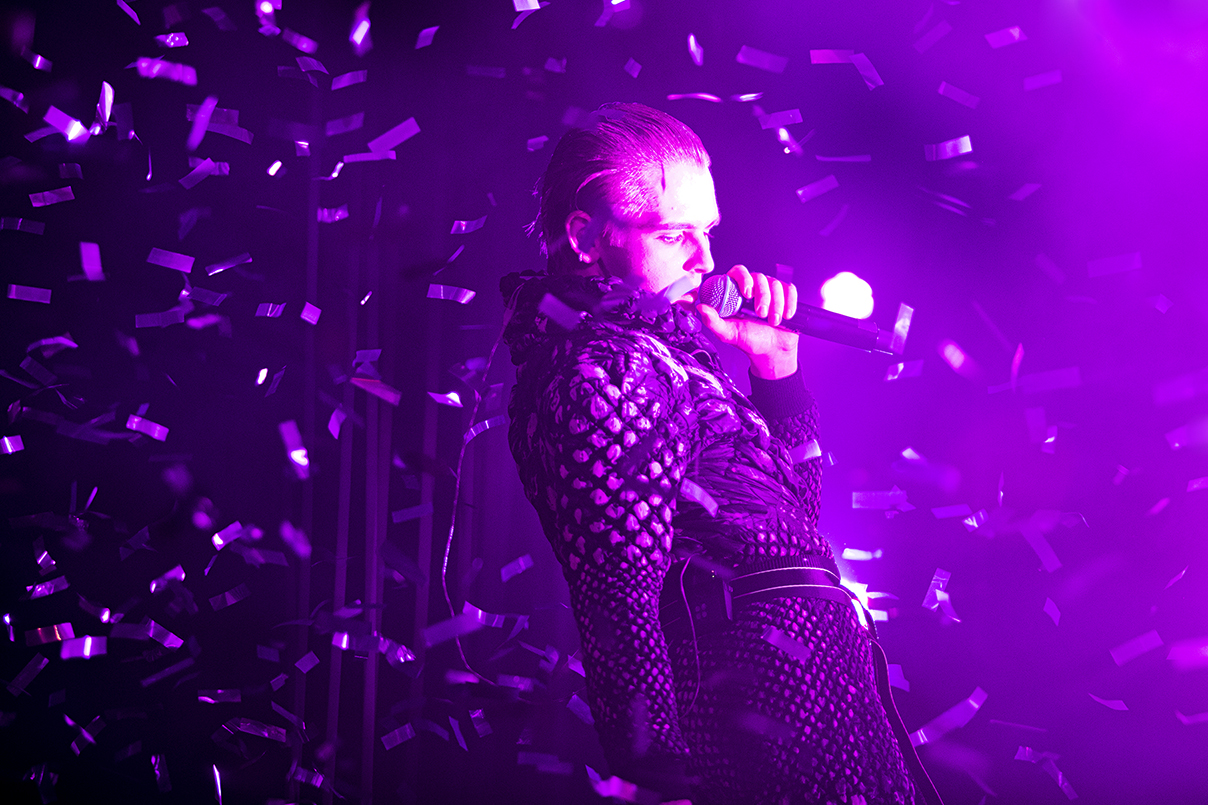 The show begins with the mission statement. Accompanied by flickering lights, the announcement is made by a robotic female voice whose impassionate tone and anti-capitalism agenda remind of Radiohead’s Fitter Happier. “Welcome to the society of the spectacle. Welcome to Hatari.”

Hatari, indeed, seems to play with the collective unconscious and possibly reconcile with their shadow sides by this means. Einar Stef is the first to step on the stage. In the dark red lights, his fierce look, Darth Vader outlines and monstrous spikes on the mask make you feel uneasy. Just a few seconds after he reaches the drum kit you recall the childhood memories of reading fairy tales when villains seemed more attractive in contrast to heroes.
Their memorable appearance on Eurovision boosted the band’s live show production even further. Featuring a seemingly infinite number of contributors, each composition suggests immersive experience. Surrounded by the black-eyed demonic dancers the trio performs Ódýr, one of the old tracks which back in the days was performed by the band members wearing military costumes until these were superseded by BDSM aesthetics.

Despite being initially announced, Hatari’s fellow musicians take you by surprise by popping up randomly and as unexpectedly as Jack-in-the-box. Here is Bashar Murad, a Palestinian singer, contributing enchanting tarab vocals on Klefi/Samed. Co-written with Bashar, the track was released by the band shortly after the Eurovision Palestinian flag incident. Svarti Laxness, a Reykjavik-based hip-hop artist comes to the stage next to perform Helvíti (“Hell”), a poetic post-apocalypse statement. 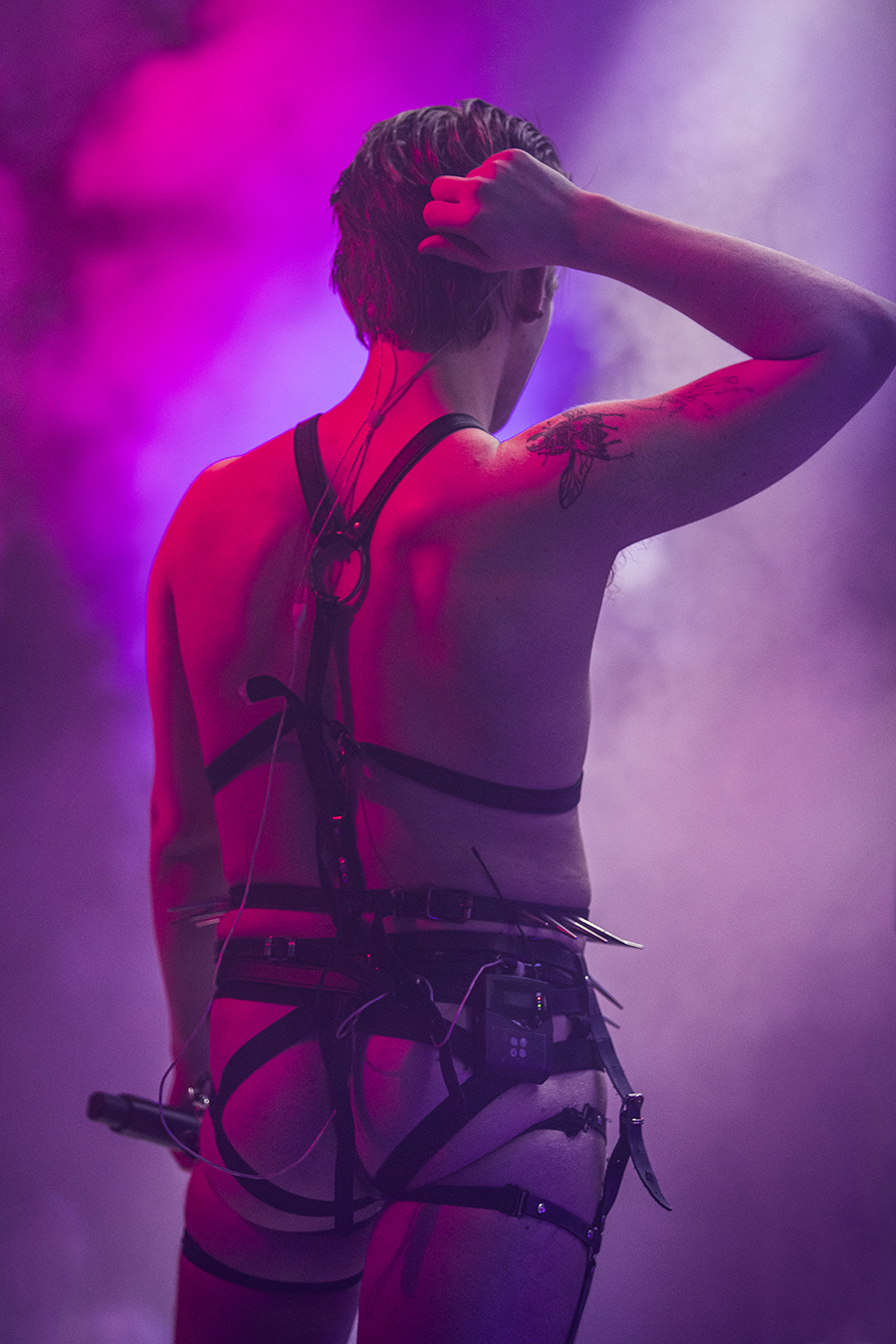 Listening to the debut album might be compared to playing a computer game such as Civilization 5 for the first time. It’s hard to take it in just like a seamless idea in terms of music. Neyslutrans can be described as a sequence of compositions shifting between techno, Europop, hip-hop and neoclassicism which altogether fit the title implying trance as not a genre but a state of mind. This cognitive dissonance is all the more impactful during the show. A sedative and cold-sounding new wave number Ógleði is followed by Spectavisti Me Mori, op. 8, a neoclassical piece for violin, written by Pétur Björnsson. Spillingardans (“Dance of Corruption”), a Nitzer Ebb-esque anti-capitalist rant precedes Klámstrákur (“Pornoboy”), a dancehall hit with languid leading vocals by Klemens Hannigan, who by that moment has nothing on his body but a leather harness.

With the encore part coming, the light show frenzy fades and the kitsch vibrancy subdues – a choir lines up on the stage. They sing a capella another tranquil piece Nunquam Iterum op. 12, created in collaboration with an Icelandic composer Friðrik Margrétar. Overall melancholy feels in tune with the post-apocalypse mood of the show. Yet, the ending is far from being pessimistic. At the finale of Hatrið Mun Sigra (“Hatred Will Prevail”), the dance troupe’s choreographer Andrian Sigurgeirsson spreads the rainbow-coloured wings on his back. With such a demand for equality and boldness of artistic expression, there is a light at the end of the tunnel.

Words by Irina, you can find more of her writing here.