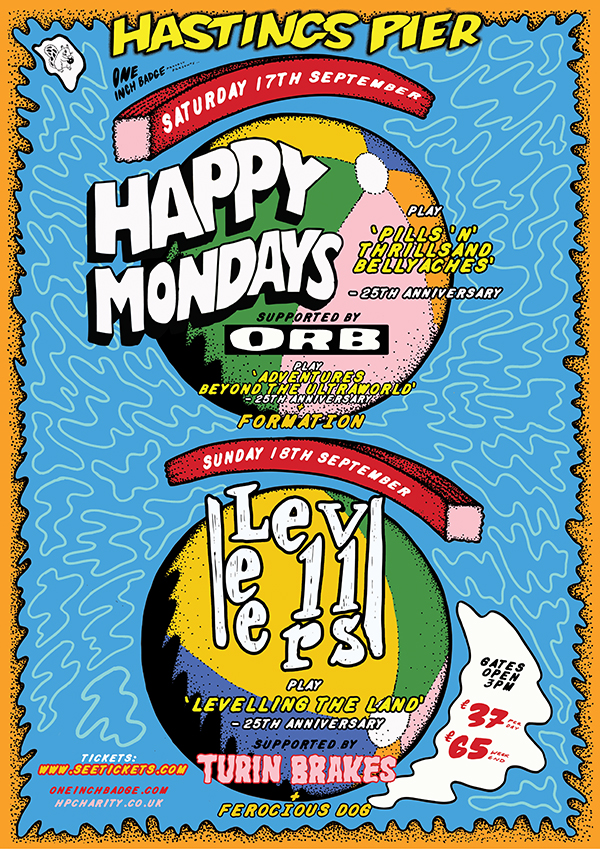 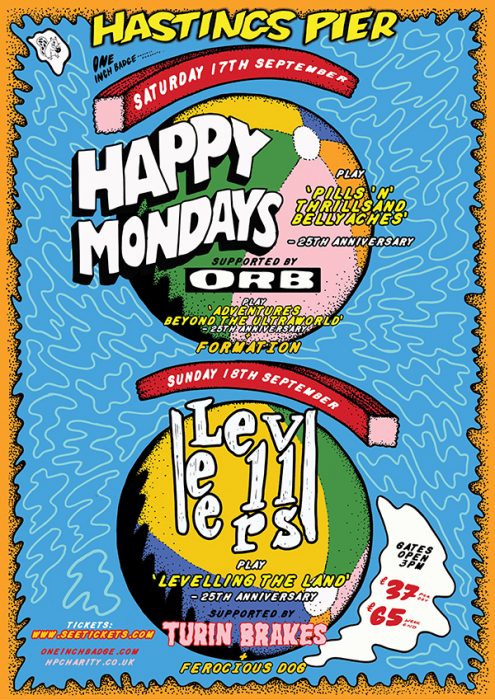 Today One Inch Badge are pleased to announce two very unique anniversary shows for two of Britain’s most successful acts on the newly reopened Hastings Pier!

Saturday 17th September will see the HAPPY MONDAYS perform ‘Pills ‘n’ Thrills and Bellyaches’ in it’s entirety for it’s 25th anniversary, plus a selection of greatest hits. Support on the night will come from THE ORBperforming ‘Adventures Beyond the Ultraworld’ in full, also for it’s 25th anniversary; and FORMATION, one of the most exciting new indie electronica acts of the moment.

Sunday 18th September will see the LEVELLERS perform ‘Levelling the Land’ for it’s 25th anniversary, plus a selection of greatest hits; with support from TURIN BRAKES who recently released their seventh album ‘Lost Property’; and the Nottingham folk-punk outfit FEROCIOUS DOG.

The history of Hastings Pier is one of love and tragedy, originally opened in 1872 it’s had many lives, including an iconic period in the 1960s where the pier quickly became of the most important venues on the touring circuit, playing host to The Clash, Jimi Hendrix, The Who, Nico, Siouxsie and the Banshees as well as the location of Syd Barrett’s last ever show with Pink Floyd.

Damaged by the infamous storms in 1990 and closed to the public between 1999 and 2002, while it did re-open briefly it was finally closed in 2008. Efforts continued to raise funds to save the pier but in October 2010 it was dealt a devastating blow when a fire destroyed 95% of it’s superstructure. Unlike the iconic Brighton West pier, however, structural surveys concluded that the cast iron Victorian-era sub-structure was salvageable. Now six years later the final works of the £14.2m refurbishments of Hastings Pier are complete and the pier will re-open to the general public in the next few weeks.

Following on from the May 21st opening gala show with Madness, which sold out in just 1 hour, these two concerts with HAPPY MONDAYS and LEVELLERS will be two of the major outdoor events on the Hastings Pier head in 2016.